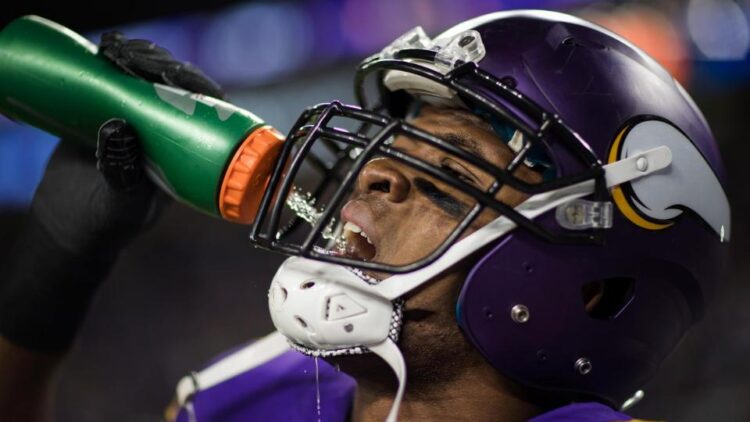 Is it just me or has this season become so excruciatingly painful, so categorically absurd, so anti-Vegas that it has actually become kind of funny?

I mean, the Minnesota Vikings’ injury virus has stretched all the way to its head coach — not even the kerfuffle of Green Bay fans suffering from that horrible loser denial bug (that seemingly decided to set up camp and raise a rather large family in the southwestern quadrant of the Midwest) can say their head honcho was forced to sit out a game in order to receive his (Guinness world record-breaking) 27th eye treatment of the year.

Minnesota, which was subsequently led into battle by special teams coach Mike Priefer and oft-ridiculed defensive coordinator George Edwards, came within one quarter, 15 minutes, two yards — er, seven — and a coin flip win of upending the class of the NFC only to melt like a popsicle — left unguarded by its protective wrapper — resting atop a jet-black rural Birmingham, Ala. rooftop smack dab in the middle of July while Vin Diesel unleashes a blitzkrieg of unforgiving heat from an LPO-50 flamethrower constructed in the Soviet Union circa 1950 for the sole purpose of destruction by combustion.

I cast Diesel for the role of pyromaniac popsicle obliterator for the same reason the Dallas Cowboys departed from Minnesota as an 11-win football team — only a few men were capable of stopping me from imposing my will, but even these dominant individual efforts failed due to the utter incompetence personified by the Vikings offensive line in combination with a team recently diagnosed with a terminal case of situational cancer.

The team will receive a second opinion, not because the entire 53-man roster hasn’t bought into this, but because Sam Bradford determined Jeremiah Sirles may need an instant replay after a five-yard false start penalty led to a belief that the below replacement level right tackle is hard of hearing.

Before we reach the climax of this dandy of a write-up, let’s quick look back at the extremely talented firefighters simply incapable of putting out this truly epic, once-in-a-decade dumpster fire of a Vikings team that even California — home of Jeff Fisher’s Todd Gurley-murdering Los Angeles Rams, a San Francisco 49ers team whose coach has not returned yet from an urgent business trip to Eugene, Ore., an extremely talented and well-rounded San Diego Chargers roster capable of elite play except for during any remotely critical moment and, of course, the West Coast native and the Associated Press‘ No. 2-ranked natural disaster (fault-line Earthquakes still a unanimous No. 1), Wildfires, which always start as a result of absurd conditions (“very dry air”, pile of mostly-dead Redwood branches, roughly four pounds of dead bark chunks and a Grizzly Bear Cub just hucking rocks at a Wise Moose), erupt unpredictably and almost instantly evolve into epic infernos that slowly engulf miles of land in flames until they burn to a crisp or it tuckers itself out — denounced the Minnesota football team as an honorary West Coast Wildfire (Football Gods hold second-year option).

The latest addition to this list of Minnesota’s most honorable smoke jumpers is linebacker Anthony Barr, who narrowly defeated PUNTER JEFF LOCKE by a mere two votes … yup, a smoldering hot dumpster fire:

And here are the nominees for Week 13’s  Vikings  — whoops, only players from winning teams and Mike Trout can win MVP — Player of the Week:

The one benefit of the Minnesota’s recent string of distinctly painful losses is that second-year edge-rusher Danielle Hunter seems to be growing stronger in defeat. A third-round pick out of LSU, Hunter was almost universally believed to be a multiyear project after finishing his 26-game tenure with the Tigers with a grand total of 4.5 sacks — which, given his recent play, has the sniff of a bold-face lie. But it’s not.

Dallas, which responded with potentially the best offensive line since the NFL-AFL merger, countered Everson Griffen’s pass-rushing talent with potentially the single most valuable player in the NFL in dominant pass-blocker Tyron Smith. The interior wall of All-Pros Travis Frederick and Zack Martin kept mainland whale Linval Joseph from reaching their rookie signal-caller, and the sneaky Tom Johnson, who has not recorded a quarterback takedown since before the bye week, was shut out too.

While Smith, Frederick and Martin each reinforced their 2016 All-Pro candidacy with another outstanding performance, the dominant front five was exposed by its weakest link. Veteran Doug Free — who can start wherever he wants and for however long he wants in Minnesota — received a 60-minute crash course in Hunting Season etiquette from the Vikings’ “raw” edge-rusher.

As a result, the rookie Prescott was reintroduced to the defensive monster responsible for stuffing a mouthful of lush, Baton Rouge, La. Bermuda down his throat two years ago. Yes, the feeble collegiate pass-rusher recorded slightly over 22 percent of his sub-handful of collegiate sacks against the former Mississippi State quarterback.

Hunting Season continued throughout the evening, as the otherworldly athletic, multi-purpose defensive end tossed Prescott to the ground a second time to join Washington Redskins defensive end Trent Murphy as one of the only two players in professional football responsible for at least 10 percent of Dallas’ sacks allowed in 2016. Hunter’s ‘Play of the Game?’ A fourth-quarter third-down sack of Prescott, which was effectively nullified almost instantaneously by Adam Thielen’s rare special teams blunder.

In Hunter’s example, week-by-week improvement has become a significant bright spot in Minnesota. For players like cornerback Xavier Rhodes, however, improvement isn’t really possible. The 2013 first-round pick continued his truly astounding 2016 campaign with another impressive effort against touchdown machine Dez Bryant and the Cowboys.

In a little over 25 minutes of fieldwork, the next big-money cornerback yielded just 10 yards — all of which came on a screen pass to Bryant with the former Florida State Seminole lined up on the goal line. The Bryant catch-and-run yielded just the second touchdown allowed by Rhodes this season and given the Cowboys wide receiver’s remarkable success rate when targeted on an end-zone fade route, it’s hard to blame Minnesota’s All-Pro-caliber defensive back for lining up deep.

Still, allowing one catch and a pitiful 10 yards — which would not have even been in play were it not for Thielen’s untimely fumble — against one of the league’s most physically dominant pass-catchers is more than worthy of a Player of the Week nomination.

If allowing 10 yards in a little over 25 minutes represents an example of dominant cornerback play, then Terence Newman leaving the Thursday Night Football matchup with fewer yards allowed than when he entered is downright absurd. The elderly defensive back allowed a catch — unacceptable, I know — but it amounted in negative two yards, which, as it turns out, proved to be all 1-R Terence would allow to 2-R Terrance Williams and the post-meth addiction Wes Welker Dallas has running out of the slot.

If nothing else, Newman’s performance against the Cowboys reinforced my personal decision to continue searching for the Fountain of Youth. Tuck Everlasting, more like Terence Everlasting; am I right, guys?!

It’s hard not to blame the quarterback when a team gets held out of the W column for 40 Days and 40 Nights, but Sam Bradford truly has been, at the very worst, an average signal-caller in Minnesota. The sleeve-wearing huddle leader came up just shy of two Jacksons and a Grant for yards while also throwing a beautiful — alright, it was probably the easiest completion he had all year, and that’s saying something — game-tying touchdown to a running back who is seemingly in an endless battle with sixpuntophobia, more popularly known by a phrase made up of Webster-approved words, the phobia of scoring touchdowns.

Unfortunately for Bradford, his worst moment of the game immediately followed the Jerick McKinnon touchdown. The Vikings quarterback, moments prior to being nuked 100 percent in the head, shoulders, eyes and ears and mouth and nose, slung a pass that Kevin had a fair shot at hauling in from, yes you guessed it Minnesota fans, his cheap seats.

Had the former No. 1-overall selection not been forced to reenact the gruesome bear-mauling scene from Leonardo DiCaprio’s masterpiece, The Revenant, chances seem pretty good that Bradford would have delivered a pass landing in the 55415 area code.

But, instead of feeding what was once a painfully kind-hearted, incredibly pale and cold-resistant fanbase, the Zebras wiped their brows with the yellow cloth and the starving hyena demographic continued its evolution from “OooOOooh, it’s oOOooK; we are going to be fine,” to, “Enough with the weekly jabs; throw the damn haymaker and get it over with.”

So, our ever-faithful readership of Vikings-savvy and literate hyenas; which wasted All-Pro-caliber effort is most deserving of Week 13’s Player of the Week?