Player Of The Game: Cast Your Week One Vote! 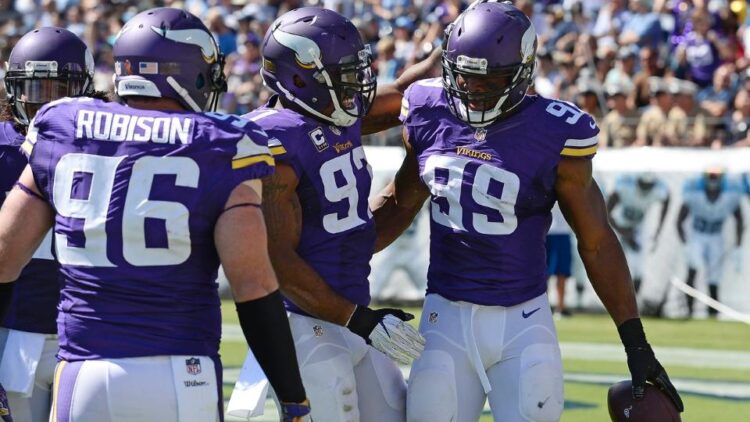 Yes! We have a lot of weekly segments here at Vikings Territory during the regular season, but this is by far my favorite, especially following a victory. For those unfamiliar, this is where we nominate individuals and you vote one of them as the Vikings Player of the Game.

The Vikings pulled off a 25-16 victory on the road with Shaun Hill under center in somewhat unusual fashion. Not a single one of my bold predictions came true, and I’m okay with that given the outcome, but nobody could’ve really, truly predicted what would’ve been the deciding factors in this matchup.

Here are your nominees for Week One. Be sure to cast your vote at the bottom of the article and, as always, if you vote “other,” please leave your vote in the comments section.

The Vikings offense didn’t score any points, and they were snooze-inducing in the first half, but the veteran Hill was able to what was needed of him: not lose the game. As Adam Patrick pointed out in his recap, Hill coming out of this game with zero turnovers was huge in determining the outcome of this one. Hill ended the day with an extremely modest 18 of 33 performance in which he accomplished 236 yards through the air. He also picked up eight yards on two rushing attempts. Hill earned a 77.3 quarterback rating on the day.

The offensive line wasn’t perfect on Sunday by any means. They looked plenty overmatched in the run game, but it was clear that the Titans were selling out to stop the run for much of the afternoon and daring Hill to throw it. The easy-to-criticize left tackle Matt Kalil played a practically perfect game, and credit is due where it is deserved. Hill took zero sacks on the day and, unlike his right tackle counterpart Andre Smith, Kalil didn’t pile up the mental errors. His name was not mentioned at all, in fact, and we all know that is a tell-tale sign of solid left tackle play.

Pass catchers Stefon Diggs and Kyle Rudolph both deserve mentions for solid performances this week, and perhaps you think I’m wrong in not including them in the nominations here, but to me it was really Adam Thielen that deserves the most praise of the bunch. Not only was he a clutch target for Hill, earning himself four catches for 54 yards, but he was his usual dependable self on special teams, as well. Thielen is just one of those guys that always seems to be doing what is needed to win a ballgame, and if he keeps putting up performances like this, then Jarius Wright better get used to his seat on the bench.

There are a number of defensive efforts worthy of being highlighted in this game, for sure, but along the defensive line it could easily be argued that nobody made a bigger impact on the outcome than Hunter. Hunter had four tackles, one tackle for a loss, on sack, and that heads up scoop-and-run score that really put some distance on the score board.

The Vikings had literally no momentum heading into the second half of yesterday’s football game, but that all changed when some Everson Griffen pressure gave Kendricks a chance to undercut a short Marcus Mariota pass. Kendricks then rumbled for 77 yards and the score, a moment that certainly marked a shift in favor of the Vikings. Kenricks also had six tackles on the day, one of which was a beautiful knifing pop for a loss.

While I try and nominate the guys that have the very best chance at winning the award, I also understand that no two people watch a football game and generate the exact same conclusions.

If you want to select “other” it certainly won’t hurt my feelings. Just let us know in the comments section below who it is that is getting your vote!