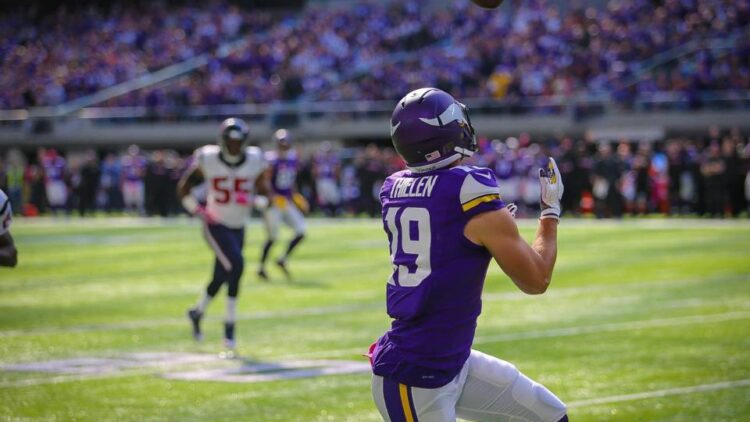 The Minnesota Vikings Week Five “Player of the Game” voting is underway.

The Minnesota Vikings have a lot to be thankful for, namely their head coach, as they enter their early bye week boasting a 5-0 record. Their latest stomping of the Houston Texans by a score of 31-13 was a well-rounded victory that adds to the pile of evidence that suggests the Vikings are a legitimate contender in the NFC.

This weekly tradition doesn’t grant awards to coaches, however. It doesn’t award points to the home crowd. It is strictly reserved for the individual players that stood out the most, win or lose, in any given game. The winners so far have been:

This week’s award will be decided via the poll at the bottom of this post, so be sure to cast your vote! I’m guessing this is the first time in weeks that the decision isn’t a landslide. And, now, the nominees:

Against a formidable defense, and with an increasingly worrisome offensive line ahead of him, Bradford arguably turned out his best performance as a Viking thus far. He continued his streak as a turnover-free performer, while also throwing for 271 yards and two touchdowns. He took two sacks, not to mention a number of hits on successful throws that could’ve rattled him, and posted a final quarterback rating of 123.1.

No Diggs? No problem. At least that was the case this week when Adam Thielen took his already incredible NFL journey a step further and turned his starting duty into one of the NFL’s best receiving performances of the weekend. He led the team with seven catches, 127 yards, and a touchdown in what should be considered a bit of a coming out performance for the soon-to-be father.

Marcus Sherels was once again a star, returning his second punt for a touchdown of the season. He ended up with 100 yards on four punt return (the touchdown was 79 yards of pure awesomeness), and added 17 more yards to his name via a kick return.

Don’t get me started on the terrible officiating taking away a spectacular play from Everson Griffen (or do I list him as “Griffin” this week?), but in the end it was Robison that made the biggest impact from his spot on the defensive line. His stat line is kind of interesting: 2 tackles, 2 sacks, and two hits on the quarterback. That doesn’t quite illustrate how fun of a day Robison had, but he was quite the difference-maker in the win.

Kendricks rebounded nicely from his sketchy outing against the Giants last week, producing five tackles and seldom getting beat or caught out of position. The middle linebacker impressed me most with his coverage skills this week, notching two defended passes, both of which were key to stifling the Houston offense mid-drive.

Sendejo tied for a team-high six tackles on the day. He also ensured that the Vikings continued to build on their already-impressive turnover differential when he snagged the games only interception, a preemptive strike against any hopes the Texans might have had regarding an improbable comeback.

There were lots of great individual contributions to this victory, and I have certainly not named them all. Please feel free to check the “OTHER” box in the poll and let us know who your vote counts for via the comments section below.