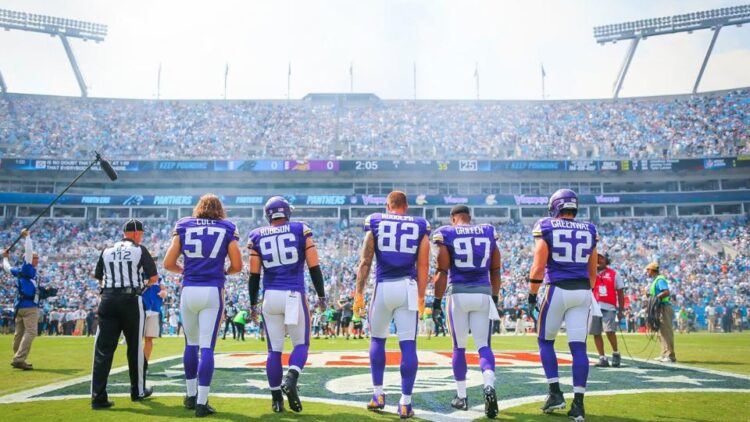 Vote for the Vikings Week Three “Player Of The Game” Award below!

Hey, how about that? If last week’s win against Green Bay seemed improbable, it certainly seemed like mountains would need to be moved in order to milk a victory out of a road trip to meet Cam Newton and the Carolina Panthers.

For a while, thoughts of victory seemed particularly dubious when the Panthers jumped to a 10-0 victory on their first two possessions and the Vikings offense looked like 11 guys wearing concrete blocks instead of clears.

Still, an impressive 22-10 victory is what the Vikings snagged out of Carolina, and now we have the privelage of once again awarding VT‘s “Player of the Game” award via the poll below. Eric Kendricks and Sam Bradford have each won the award through two weeks of the season.

Here are the nominees:

Adrian Peterson exits Norv Turner’s offense due to injury and we all knew somebody would have to step up to the plate to help fill the void. Stefon Diggs was the obvious choice, and for good reason, but on Sunday afternoon it was the tight end Rudolph that kept the chains moving and put points on the board better than anybody. Rudolph caught seven of his ten targets for 70 yards and a score. Not counting the touchdown, five of those seven catches were good for a first down.

Locke is on a roll, being nominated for this award for two straight weeks. This week, Locke punted seven times and once again helped his team win the field position battle at crucial moments. He averaged 48.4 yards on those punts, with a long of 65 yards, and placed three of them inside the 20 and only got stuck accepting one touchback. With Cordarrelle Patterson’s speed suddenly appearing at the gunner position, Locke was perhaps better able to unchain his leg a bit and have fewer worries about outkicking his coverage.

Everson Griffen was reportedly dehydrated and/or ill on the sidelines early in the hot Charlotte matchup, but that didn’t stop him from unleashing a terrific pass rush that played a huge part in neutralizing Cam Newton and causing turnovers. He ended the day with four tackles, three sacks, and another hit on Newton that helped the Vikings get a turnover.

The Vikings weren’t able to totally contain Newton, especially early on, but the success they did find was in large part due to the instincts and athleticism of their stud outside linebacker. Barr ended the day with seven tackles and a sack, playing sideline-to-sideline in a way that seemed to frustrate the Panthers offense similarly to what was on display during the Super Bowl.

Marcus Sherels had a pass defense late in the game that really should have been an interception easily returned for a touchdown. That little bit of defensive production, of course, is not enough to get a player on this list and it was a Sherels play on special teams that really seemed to be turning point for Minnesota when they were down early. Specifically, that play was a dash-and-bolt 54 yard punt return for a touchdown. He added another four yard punt return and an 18 yard kick return to his day.

Like I mentioned with Anthony Barr earlier, Harrison Smith was just a playmaker on Sunday, playing to both sidelines and keeping the offense in front of him. He had a pair of hits that were audible from your backyard even though your TV is in your living room. He ended up with seven tackles, a sack, and recovered the fumble following the Tom Johnson interception to ensure the Vikings kept the possession.

Name a defender and they should probably be praised for a number of things they did on Sunday. The offense is less worthy. Still, if I left your Player of the Game off of my nominees list then feel free to click the “OTHER” button and cast your vote in the comments section below.