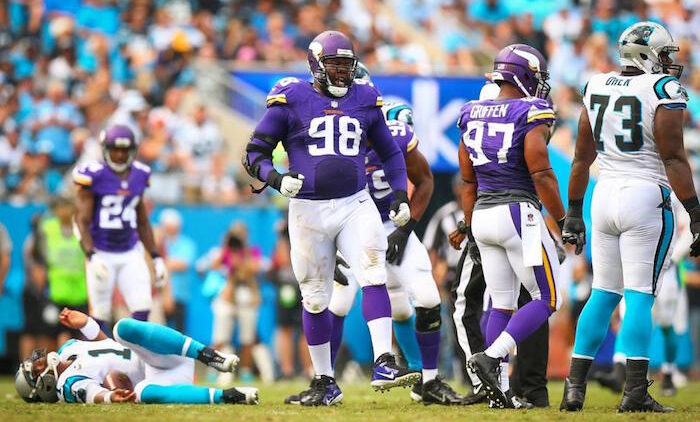 Whatever head coach Mike Zimmer has been saying to the Minnesota Vikings in the locker room at halftime, it has been working. For the second straight time in an away game this season, the Vikings ended up getting the win after trailing from halftime. This time with a 22-10 victory over the defending NFC Champion Carolina Panthers.

Behind 14 points and four sacks in the second half, Minnesota was able to defeat the Panthers on Sunday and improve their 2016 record to 3-0.

The Vikings got off to a bit of a shaky start in Carolina, allowing the Panthers to score 10 points on their first two offensive drives. But Minnesota went on to score 22 unanswered points and never looked back.

Tight end Kyle Rudolph had himself a day on Sunday, finishing with seven catches for 70 yards and one touchdown. Carolina really had no answer for Minnesota’s veteran tight end, who now has 14 total catches this year.

In his second start for the Vikings, quarterback Sam Bradford was solid once again. Finishing the game completing 18 of his 28 passes for 171 yards and one touchdown.

With no turnovers in his first two games for Minnesota, Bradford seems like the perfect quarterback to pair with the team’s ferocious defense.

Speaking of defense, the Vikings are currently looking like they have one of the best in the NFL this season. They entered Sunday’s game with a tough matchup against Panthers quarterback Cam Newton, but in the end they made the reigning league MVP look like he was playing in his first NFL game.

Minnesota’s defense sacked Newton eight times (including one safety), intercepted him three times and held him to 288 total yards.

Vikings defensive end Everson Griffen ended the day with three sacks. He now has four sacks on the season and he could be well on his way to a career year if he continues with his current pace.

The Vikings began their comeback in the first half of this game with a Marcus Sherels 54-yard punt return for a touchdown in the second quarter. From that point on, the momentum seemed to shift in Minnesota’s favor.

No matter how many points they were trailing by on Sunday, the Vikings had no doubt in their ability to come out with the win over Carolina. Minnesota will head back home now, where they will host the New York Giants next Monday and try to start their season with a 4-0 record for the first time since 2009.