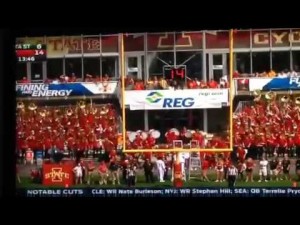 On this Easter Sunday, a group of us here at VT are continuing to highlight our favorite “sleepers” to keep an eye on as Draft Weekend plays out next month. Thus far, we have pointed out OLB Edmond Robinson, OG Josue Matias, P Trevor Pardula, CB JaCorey Shepherd, QB Brandon Bridge, and S Sam Carter.

Today, I’m kicking things off by discussing a running back prospect that has piqued my interest. The Vikings, of course, have a turbulent situation on their hands at running back right now, but adding talent and depth in later rounds is likely to occur regardless of how the Adrian Peterson saga plays out over the next month.

I don’t view North Dakota State’s John Crockett as a full-time starter in the NFL, but I also don’t see him as a strict reserve option like I consider Matt Asiata to be. Instead, I see Crockett as the type of guy that could be an essential part of a two or three running back committee.

Crockett has good size (5′ 11″ and 206 pounds) and excels as a cutback runner, demonstrating the necessary patience and decision-making skills. If he can manage to gain even a little more power and continue to develop his vision through sound coaching, I could see him becoming a very hard runner for NFL defenders to bring down. He already has a reputation for toughing his way to that extra yard or two.

He’s also shown the ability as hands-catcher, with some decent wiggle in the open field, to be a weapon in Norv Turner’s passing attack. He isn’t a scat back that you’ll want lined up in the slot, but he could be very effective on screen plays to move the chains and set up the long ball.

Perhaps the most attractive part of Crockett’s game, and what will earn him a spot on an NFL roster, is his willingness as an effective pass blocker. He isn’t perfect yet, and isn’t even the best blocker in this class, but I don’t think there will be a Day Three prospect available that shows more promise in this area.

In the end, Crockett is my favorite Day Three running back because I see him holding his own as a running back in the NFL. Many others will feel confident in their ability to stick to a roster based on their special teams skills, but that isn’t Crockett. I think he’ll enjoy a productive NFL career based on his well-rounded abilities as a running back.

I’m not assuming anything about Adrian Peterson at this point, but I do see Crockett as the type of guy that could compliment Jerick McKinnon very nicely. In fact, I see him as a flat-out upgrade to Asiata, with plenty more upside.

Keep track of this guy on Draft Weekend. He’s going to become very useful to the team that selects him.

The Vikings were one of the NFL teams present at the NDSU pro day and he plans to watch the Draft with his family in his hometown of Minneapolis.