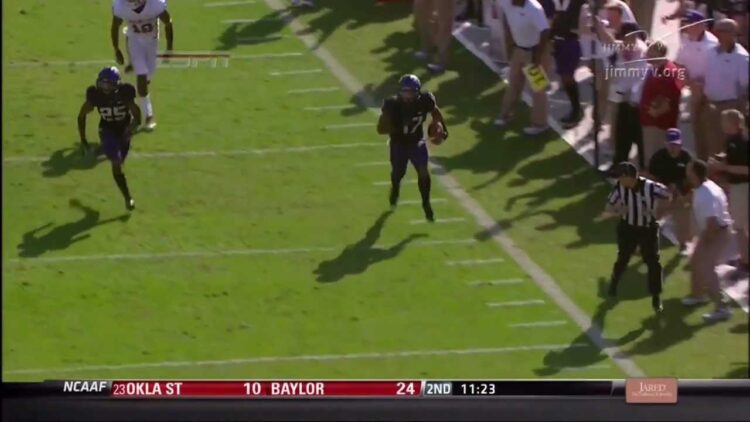 Welcome to “Sleeper Sunday” where a few of us here at VT are going to take a look at some of our favorite Day Two and Three prospects between now and Draft Weekend. Luke Inman is providing in-depth scouting reports for the bigger names set to join the NFL, but this is where we explore some of our favorite options that will be found further down the Vikings draft board.

Be sure to tune in every Sunday for a fresh batch of sleepers!

First up, I take a look at a guy that I think can be compared to Taylor Mays in a lot of ways, and we already know the Vikings have expressed interest in Mays as a free agent.

Like Mays, Carter is a big option (6′ 1″ and 215 pounds) and is thought to be somewhat of a linebacker-safety hybrid. Mays entered the league via the second round with expectations, however, that he be a true safety and has had a disappointing NFL career after being a standout at USC.

Carter has played in TCU’s 4-2-5 defense and the question becomes whether or not he is a versatile safety or if he is just another “tweener” that might be able to stick to a roster if he excels on special teams.

Me? I think he will prove to a solid safety option and see a guy that could be an immediate upgrade for the Vikings across from Harrison Smith. Yes, I said “immediate.”

TCU’s defense can never be accused of lacking complexity, and Carter has shown the football intelligence and leadership throughout his four years when adjusting other players and helping everyone line up. HE was a natural fit for the “captain” label at TCU and the discipline is best illustrated by pointing out that he only accumulated four penalties in his three years as a starter.

Some safeties are one-trick ponies, performing one duty really well which helps mask their short-comings, but I see Carter as more of a “Jack-of-all-trades” type of player. He may be the “master of none,” but you aren’t going to catch him out of position very often, and there are not very many plays he can’t make.

Carter can be a downhill run stuffer. He is adequate in coverage and plays the ball very well in the air. He is even a proficient blitzer off the edge. I like the Taylor Mays comparison I made earlier, but the upside here might be someone more in the mold of Kam Chancellor if Carter can continue to get stronger and coach’s work on his few flaws.

The problem with Carter, and why is being considered a Day Three prospect by the masses, is simply his athleticism and concerns about that impacting his coverage abilities. As expected with a big guy, he is too tight in the hips could easily be bested by a faster pass-catcher in one-on-one man coverage.

Despite his size, Carter is also not a big hitter, as he tends to be more of a form tackler that depends on his ability to drag down the ball carrier. Considering that he is good at tackling the way he does, and that it has probably helped him stay as healthy as he has, I don’t consider this as much of a detractor as some others might.

The ability to stay healthy, after all, is among the top traits teams should be looking for at positions like safety, which is an opinion you’ve heard me state numerous times. Safety is just one of those positions where durability is tough to overvalue.

If the Vikings get to the third round of the Draft with Robert Blanton and Andrew Sendejo still their top options at strong safety, I hope Rick Spielman starts the process of targeting the senior from TCU. I could easily see him being this year’s surprise starter come Week One, beating out Blanton who was a surprise starter himself not too long ago.