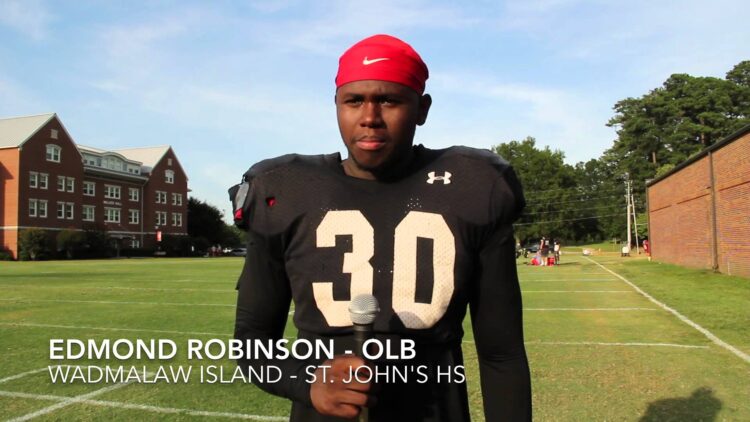 Division I linebackers like UCLA’s Eric Kendricks and TCU’s Paul Dawson will dominate the early draft-day conversations, but teams shouldn’t sleep on the later rounds’ small-school prospects. One in particular, Newberry’s Edmond Robinson, could be a potential steal for the Minnesota Vikings near the end of the 2015 NFL Draft.

Newberry, a Division II school in South Carolina, hasn’t seen a player drafted since 1974, when the Cardinals selected linebacker Greg Hartle in the 10th round. Currently, three former Wolves are on an NFL roster, including the Vikings’ Brandon Bostick. Robinson played with Bostick at Newberry, and spoke about the advice he’s received from his former teammates:

[quote_center]“They’ve been great about giving me advice and telling me how to approach certain situations. They all said that if they can make it, I can too.”[/quote_center]

Robinson was just one of two Division II players to participate in last month’s NFL Scouting Combine, and used the week in Indianapolis to boost his draft stock.

He showed off excellent straight-line speed, running the 40-yard dash in a surprisingly fast 4.61 seconds — better than Shaq Thompson and Randy Gregory. Robinson’s other results also impressed, as his 37-inch vertical leap and his 10’1″ broad jump ranked in the top-10 of all 34 linebackers at the Combine.

In terms of size, Robinson is what we’d call a “freakish” athlete — with 34-inch arms and 10’1/4″ hands, Robinson measured as one of the Combine’s bigger players. At 6’3″ and 245 pounds, he’s a sinewy player, with the length and frame to cover tight ends (which he did at Newberry).

Robinson, to many scouts, hasn’t scratched the surface of his ability; he’d be a scary compliment opposite Anthony Barr in Mike Zimmer’s defense. His build is ideal as a weak side linebacker in the NFL, but he could stand to add even more weight to his lanky frame.

That frame allowed him versatility in Newberry’s defense. Against run-heavy teams, he lined up on tight ends, shedding blocks and making plays from the back side of the formation. In passing situations, Robinson bumped out to cover the slot receiver, and even rotated to safety at times. Though he struggled, the potential to move Robinson around a defense is high — we’ve seen how Zimmer uses players to their full potential in Minnesota, i.e. Anthony Barr.

On film, Robinson flashes above-average initial quickness, diagnosing run plays to react quickly and make plays at the line of scrimmage. Far too many times, he missed tackles in the backfield, but showed the ability to shed blocks against lesser competition and occasionally put himself in the correct position.

Robinson’s greatest trait, though, may be his effort. The lack of muscle, the poor technique, and his struggles in coverage can all be corrected through coaching, but effort comes from within the individual. Many times on film, Robinson was out of position, either from overpursuit or missing an easy tackle, but chased down the play to make a saving tackle. His lateral quickness makes this easier, but he rarely “took plays off”, as we’ve seen from some higher-caliber players.

If and when Robinson is drafted, he will be considered a project. As I’ve mentioned, he relies almost exclusively on his athleticism to succeed on the field. Robinson, against a lower level of competition, flashed game-changing ability, but didn’t dominate consistently like you’d expect from a player with his skills. Although he performed on-par with the household names at the Combine, he’s yet to prove he can translate the speed and agility to the field against the game’s best players.

At Newberry, he was swallowed up by bigger tight ends and tackles in the run game, and failed to use his length to his advantage in separating from blockers. That can be corrected with the right coaching staff, but it’s a concern heading into the NFL. As a potential 7th-round draft pick or priority free agent, Robinson is a pick that teams will be willing to make. He’s not field-ready, but with time, can make an impact on special teams or as a weak side linebacker.

Last week, the Vikings attended Robinson’s Pro Day in South Carolina, where he impressed those in attendance and made his case for a late-round selection. “A lot of teams wanted to see how I would fit in with Division I players, to see if I could perform just as well as those guys,” he said in an interview with The Post and Courier.

Robinson proved he could perform just as well, if not better, than his Division I competition. We’ll have to wait and see if he can do the same on the field in 2015.

Be sure to check in next week for another round of “Sleeper Sunday” reports from the team at Vikings Territory!