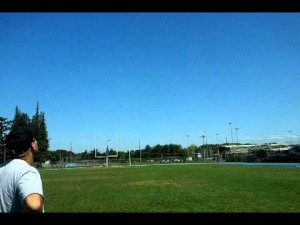 [NOTE FROM ADAM: In case you missed it, last week we introduced “Sleeper Sunday” where a few of us here at VT take a look at some under-the-radar prospects prior to May’s NFL Draft. I took a look at a strong safety candidate, Austin highlighted a cornerback, and Carl found a developmental quarterback he likes. Check it out and enjoy today’s fresh batch of sleepers.]

I’m not sure that a punter can qualify as a true “sleeper” since they aren’t really expected to be selected early on during Draft Weekend, but I have one guy in mind that I’d really like to see competing with Jeff Locke for the team’s punter spot.

That punter that I’d most like to see the Vikings chase in the latest rounds of the draft, or as an undrafted free agent, is Kansas Jayhawk Trevor Pardula.

Pardula is a big punter (6′ 4″ and 227 pounds) with a big leg. The San Jose native quickly gained notoriety in Kansas due to his ability to punt the ball long, with a 78 yard punt currently sitting as his personal best, and also showing nice control when placing them inside the 20.

Pardula’s high school team in San Jose was not successful and his attempts to establish himself as an elite punter went largely unnoticed. He spent two years at De Anza College in California and after that started fielding offers from larger schools including Kansas.

He finished his two seasons at Kansas averaging 43.7 yards and 44.3 yards in 2013 and 2014, respectively. He has continued to improve throughout his college career and could be the perfect low-investment type of guy to bring in and compete with Locke.

Locke has averaged 44.2 yards per punt in his two NFL seasons and has placed just under 30% of his punts inside the 20 yard line. His struggles have been well documented, and he seems to be an inconsistent holder for Blair Walsh, and the Vikings would be well-served to at least let him know that the punter job isn’t being handed to him on a silver platter.

In 2014, Pardula even showed that he was a more willing tackler on coverage duties than he had been before, and came away with a forced fumble to show for it during one contest. Aside from one embarrassing non-effort to cover a botched snap, Pardula quickly became one of college football’s most well-rounded and consistent special teams players, and shows an ability to turn sound coaching into marked improvement.

Oh, and just like Locke, Pardula kicks with his left leg. It has already been established that special teams coordinator Mike Priefer consider a left-footed punter to be an advantage to your team that presents unique challenges to an opponent’s return man.

In the seventh round of this year’s Draft, or even in the hours after Mr. Irrelevant is announced, keep an eye on Trevor Pardula. If he, or even someone like him, becomes a Viking then training camp will instantly have one more battle to keep a close eye on.