More Than Words: Time Is Running Out! 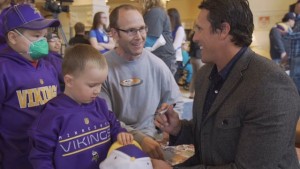 Okay, Vikings fans, here’s the deal… We need your help!

The #MoreThanWords campaign ends on Saturday evening and we’re desperate to see more donations hit the books over at Chad Greenway’s Lead the Way Foundation before the deadline. If you are unfamiliar with what we are trying to accomplish then please click here and learn about the effort!

The main thing you need to know is that you can possibly win some awesome prizes, like an autographed football and a new jersey, by donating as little as $10 to the awesome program that is “Chad’s Lockers.”

Here is a rundown of everything that has happened so far:

Alright, so here is where things stand regarding our little “competition” between sites and the total funds raised to-date.

An additional $1,120 has been raised through donations that were not earmarked for “credit” to a specific site. That brings to a current grand total of $4,054.

Okay, so we shot for the moon and (unless an angel falls suddenly appears) we are not going to meet our original goal of raising $10,000. With that being said, I’m hoping Vikings fans rally together these last couple of days and at least help us get halfway there and raise a total of $5,000.