Help A Great Cause, Get An Awesome Shirt! 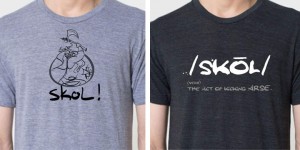 We want to buy you one of these sweet shirts designed by Matt Engstrom!

Most of you are probably aware by now that Vikings Territory and other Vikings blogs have teamed up to raise money for Chad Greenway’s Lead The Way Foundation. Amongst other things, the Lead The Way Foundation provides lockers filled with the latest technology and games for patients at Children’s Hospitals to make them feel more at home during their stay. When we started planning #MoreThanWords, we set a lofty goal for ourselves to raise a total of $10,000 across all the participating sites. The Vikings Territory team has been racking their brains trying to figure out how each person can contribute individually to help meet that goal, win the trophy awarded to the site that raises the most and support a great cause in the process.

Our very own Matt Engstrom, both an avid Vikings fan and an incredible artist for Dreamworks Studios, has recently started designing and selling Vikings themed t-shirts with his own, original artwork. Some of you may have seen some of Matt’s incredible work posted here at Vikings Territory not too long ago.

Well, in addition to being incredibly talented, it turns out Matt is also greatly generous and came up with the idea to donate all profits made through the sale of these brand new t-shirts to the #MoreThanWords fundraiser.

I have to tell you: these shirts are awesome. The “SKOL Collection” is centered around our Minnesota Vikings battle cry, “skol” and usually features Matt’s well-known Vikings cartoon. One of his latest design features said cartoon character in a trading card like format with various stats called out: The other design, the first to be included in the “Rival Tee Collection,” features our beloved Viking character smashing cheese puffs with an over-sized mallet the size of Aaron Rodger’s ego. Lactose intolerant? Actually – yes, yes I am… So, here’s the deal: In one hand we have the kindness and the generosity displayed with donating to the #MoreThanWords cause and helping brighten the day of a child dealing with some serious illnesses. In the other hand, we have some awesome t-shirts – the likes of which you will not find anywhere else. Why not have your cake and eat it too for the low cost of $24.99?

To see the shirts in more detail and to make a purchase, head over to Matt Engstrom’s store. Hurry though; this offer is only good until Sunday!