Win An Autographed Kleinsasser Football for Donating to #MoreThanWords 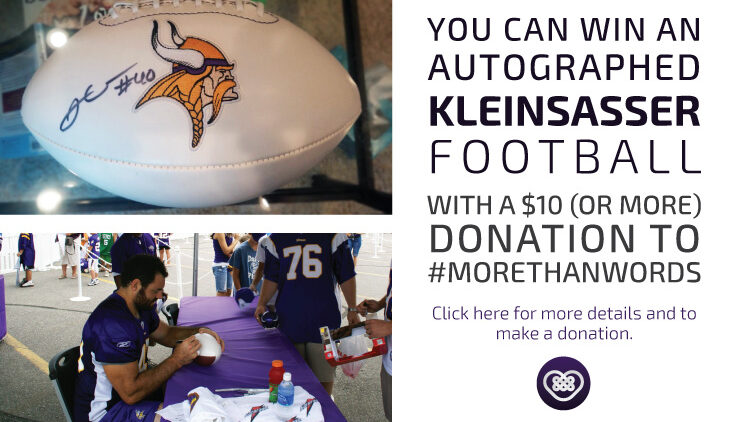 The amount of support we’ve received for the #MoreThanWords campaign has been breathtaking. It’s incredible to see so many people, most of whom don’t know each other in everyday life, come together in support of one of Minnesota’s most veteran players and for such an awesome cause.

Let’s recap the progress we’ve made so far:

But if we’re going to meet our goal of raising $10,000 by the time the campaign ends in a couple of weeks, we still have a bit of work to do. That’s why I was ecstatic when I found out that an everyday Vikings fan, just like you and me, decided that he wanted to do what he could to contribute to #MoreThanWords.

Andrew Berns, a gentleman I had the pleasure of meeting on the Minnesota Vikings subreddit on Reddit.com, has decided to donate an authentic signed football by Vikings legend Jim Kleinsasser. Andrew was lucky enough to get Kleinsasser’s autograph during training camp seven years ago. Now, this awesome piece of memorabilia can be yours for donating $10 or more to #MoreThanWords.

Similar to the jersey giveaway, the  same rules apply (and can be found here). If you’ve already donated to #MoreThanWords and selected “Vikings Territory” as the blog you’re contributing for, you will automatically be entered in a drawing when the campaign is over. If you donate more than $10, you will receive multiple entries for every additional $10. (e.g. A $40 donation would buy you four entries) At the end of the day, throwing a little money towards the #MoreThanWords campaign is a win-win situation. Not only are you generously contributing to an awesome cause but you’re also becoming eligible to win some sweet prizes (with pretty good odds, I must say).

We need your help to reach our goal.

Even if you can’t contribute monetarily, you can still play a huge role by sharing with your friends on any and all social media outlets. Or maybe you can lend a hand by telling everyone in your family and asking them to share with their friends. If you really wanted to make an impact, try hitting up your employer and seeing if they’re interested in becoming an official sponsor of #MoreThanWords.

There are a multitude of ways you can help us and we appreciate them all. I’d like to personally say thank you to Andrew Berns and FanHQ for the very generous donations to this cause that we’re all incredibly passionate about. Also, a huge thanks to everyone that has already donated to #MoreThanWords. We are honestly just blown away by how awesome all of you are.