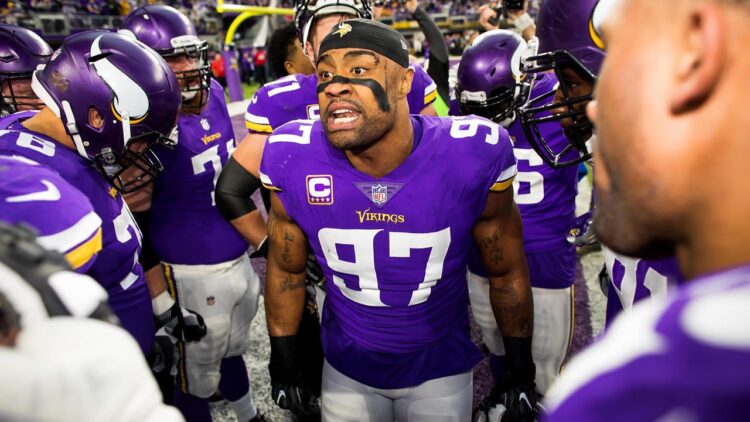 The Minnesota Vikings (4-2-1) face the New Orleans Saints (5-1) in a Sunday night showdown of two NFC divisional leaders. It’s nearly impossible to talk about the Week 8 matchup without mentioning last January’s NFC Divisional Round showdown, aka the Minneapolis Miracle, but I’m going to try. Starting now…

Saints quarterback Drew Brees has thrown zero interceptions so far this season. While that’s an impressive feat in its own right, a big reason for his success through the air is the stout play of his offensive line.

According to Pro Football Focus, the Saints have two of the top five tackles in football. Terron Armstead is graded #2 and Ryan Ramczyk is #4. Those two will face their stiffest test of the season this evening as they’ll be tasked with blocking defensive ends Danielle Hunter and Everson Griffen.

Matchup preview of #Vikings vs. #Saints, via PFF.

Griffen made his return to the team this week and tonight will mark first game action since Week 2. It’s unclear if Griffen will start the game, but according to sources he’ll be utilized as a pass rusher at the very least.

The Saints secondary, which looked so young and so promising last season, has not looked like the same unit this year. New Orleans has only two interceptions in six games, 30th in the NFL. While the defense has absolutely stifled running backs and tight ends, it’s given up 1,250 yards and ten touchdowns to opposing wide receivers. Furthermore, the Saints defense is 31st in the league in allowing red zone touchdowns.

That’s good news for the NFL’s leading receiver, Adam Thielen. He’s reached 100+ yards in seven consecutive games to start the season and has a golden opportunity to reach number eight against the NFL’s 28th-ranked pass defense.

It’s also a promising matchup for Vikings quarterback Kirk Cousins, who leads the league in completed passes. Cousins has 2,162 yards (4th in the NFL) with 14 touchdowns and three interceptions through seven games.

The Vikings defense will have its hands full stopping, or slowing, some of the best offensive players in the NFL. Brees, Alvin Kamara and Michael Thomas will provide a heat-check for the unit, which as of late has looked like the Mike Zimmer defenses of old.

When it comes to injuries, the Vikings are beat up. Five starters will likely be out and possibly more. Minnesota will need to rely on the next man up to fill the void left by the injured starters. Look at the injury reports and it becomes apparent that a win over the Saints this evening would seem… miraculous? Oh well, I tried.

Let’s take a look at how the teams stack up by the numbers.

Reporter: “In a game that’s as big as this… Do you talk to [the young players] at all, try to get their nerves calm?”