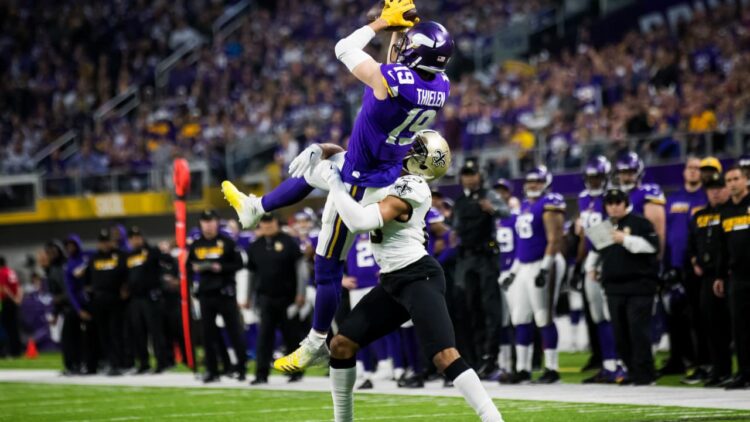 I’ll begin this week’s installment of the Skol Scale by warning my beloved readers that I have both good and bad news to share.

The good news is that the Minnesota Vikings are rolling on a three-game winning streak. Mike Zimmer’s defense appears to have regained its standard form after a couple of horrid performances in Weeks 3 and 4. Offensively, Latavius Murray has spearheaded a rushing attack that has found a rhythm and quarterback Kirk Cousins has made a habit of making difficult throws under heavy pressure seem easy (they aren’t).

Minnesota is 4-2-1 and in the NFC North lead through Week 7, despite some major absences on both sides of the ball. Not bad.

The bad news is that none of the Vikings’ four wins have come against a team with a winning record.

Obviously, the Week 5 win over the defending Super Bowl champion Philadelphia Eagles on the road is the most impressive win in 2018 for the Vikings. Philadelphia is always a difficult environment to play in and the Vikings managed to gut out a tough victory that potentially saved the season.

Philadelphia, however, hasn’t put together an impressive resume a season after winning the Lombardi Trophy. The Eagles’ three wins are against the 3-4 Atlanta Falcons, the 2-5 Indianapolis Colts, and the 1-6 New York Giants. So how impressive really was that win?

Minnesota’s other three wins are against two rookie quarterbacks and the 1-6 San Francisco 49ers.

Minnesota has an opportunity to earn a signature win Sunday night when New Orleans, winner of five straight games, storms into U.S. Bank Stadium looking for revenge for the Minneapolis Miracle from nine months ago.

It’s time for the Vikings to prove they belong among the elites in the NFL.

It’s time for the Vikings to prove that their defense is still as dominant as it was in 2017.

It’s time for Kirk Cousins to prove that he can win the games he was brought to Minnesota to win.

It’s time to prove it.

Despite a 20-point win on the road, the Skol Scale stays put at 7.5 on the 10-point scale. Minnesota achieved what it needed to on Sunday at the Meadowlands — a win. However, the win didn’t feel as dominant as it appeared to be on the scoreboard.

Offensively, the Vikings sputtered early and often. Third-down conversions seemed impossible. Outside of the two long touchdown throws to Adam Thielen and Aldrick Robinson, Cousins averaged only 4.55 yards per attempt through the air.

Additionally, injuries added up for the Vikings throughout Sunday’s win over the Jets. Pro Bowlers Xavier Rhodes and Anthony Barr along with left guard Tom Compton suffered injuries that could keep them sidelined for Sunday night’s key matchup against the Saints and beyond.

I understand that wins are difficult to come by in the NFL, especially on the road. But the Vikings’ incredibly slow start on offense and the pile-up of injuries result in a stagnant week for the Skol Scale.

The Vikings passing game should be able to move up and down the field on the Saints secondary, but how this offense handles Marshon Lattimore could make the difference in this game. The New Orleans secondary is not excellent outside of Lattimore and the Vikings should have plus matchups on the field. But if the Vikings can also beat up Lattimore, I have little doubt they’ll outscore Drew Brees and the Saints offense.

Lattimore will likely shadow Diggs, being that Diggs will mostly line up outside and Lattimore likes to shadow the opponent’s No. 1 receiver on the outside. If I’m DeFilippo, I’m going after Lattimore early with Diggs. Win that matchup early and use that to steamroll the Saints down the stretch when things start to matter a little bit more.

You might see Lattimore on Thielen or Treadwell a few times, but you’ll see Diggs vs. Lattimore the most. If Diggs can get the best of Lattimore down the field, I don’t see how the Saints outscore the Vikings.

9.19/10. Because Thielen is a legitimate Top 3 wide receiver in this league. Mix that with Cousins tearing it up and the fact that our defense hasn’t played to their full potential yet; I’m feeling pretty good.

Kind of a boring answer for me but….. I'm still at 7. These next two weeks will shape the rest of the season. Saints at home, lions on the road. The vikings can't afford to be 4-4-1 at the bye.