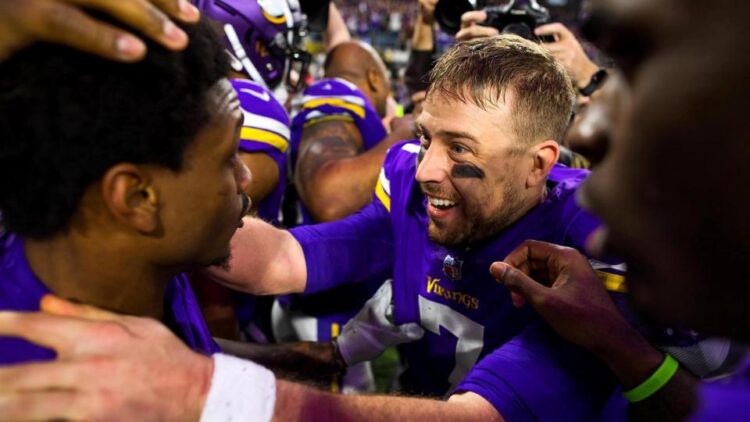 Minnesota Vikings pull off a near-impossible victory over the New Orleans Saints in the Divisional Round of the NFC playoffs.

The Vikings needed all sixty minutes to earn a victory over the Saints on Sunday. With ten seconds left in the game, Case Keenum connected with Stefon Diggs on an improbable 61-yard touchdown pass that will forever be remembered as the “Minneapolis Miracle.”

On a long sideline pass designed for the receiver to go out-of-bounds to stop the clock for a last-second field goal attempt, things fell in the Vikings favor. Saints safety Marcus Williams charged forward to make the tackle, missed Diggs completely, then the receiver turned up-field. The rest is history.

The Vikings dominated the first half of the game. After New Orleans went three-and-out on their opening drive, Minnesota opened the scored on its first possession. Jerick McKinnon capped off the eight-play drive with a 14-yard touchdown run. Kai Forbath made the extra point. It was 7-0 Vikings.

After another short drive by the Saints the Vikings got the ball back. Vikings receivers Laquon Treadwell and Diggs drew back-to-back pass interference penalties, resulting in a first-and-goal inside the ten. The offense failed to get in the end zone, however, and on fourth-and-one from the 1-yard line Forbath drilled a 20-yard field goal. 10-0 Vikings.

The Saints next drive resulted in a punt, their third in a row. The Vikings, however, would end their scoring streak with a three-and-out on their next series. But on the Saints next play, Brees threw an interception to Vikings safety Andrew Sendejo.

The Vikings then went on a 12-play, 6-minute drive that ended with a Latavius Murray one-yard touchdown run. Forbath extra point good. 17-0 Vikings.

The Saints answered with an eight-play drive of their own, but it ended in the red zone. Another interception by Brees was caused when Everson Griffen batted the ball into the air and it fell into the hands of Anthony Barr. A three-and-out by the Vikings offense ensued.

The Saints, looking to put points on the board before the half, orchestrated a 12-play drive that resulted in a missed 58-yard field goal by kicker Will Lutz. There was 26 seconds left in the half.

A roughing-the-passer penalty and short pass to Kyle Rudolph set up a field goal attempt for the Vikings. Forbath missed a 48-yarder that sailed wide left. End of the first half.

The second half was an entirely different story.

The Vikings opened with the ball and went on an 11-play drive. On third-and-four from the New Orleans 30-yard line Keenum was sacked, pushing Minnesota out of field goal range. Ryan Quigley punted and booted his first touch-back of the season.

New Orleans got on the board on their next series. After a questionable hit by Saints receiver Michael Thomas on a pick play that left Vikings safety Sendejo concussed, Brees found Thomas on a 14-yard touchdown reception that capped off a 12-play, 80-yard drive. Lutz’s extra point was good. 17-7 Vikings.

Keenum then threw quite possibly his worst pass of the season. On a lob pass that was either intended for Diggs or was meant to be thrown out of bounds, Saints safety Marcus Williams jumped up to easily grab the ball, which was floating back towards the ground.

The Saints offense got the ball at the Vikings 30-yard line. They continued the comeback with another six points six plays later. Brees found Thomas for the duo’s second touchdown connection, this time on a slant route from the 3-yard line. Lutz extra point good. 17-14 Vikings.

The Vikings would add to their lead on the next drive. With 10:12 left in the fourth quarter Forbath connected on a 49-yard field goal to give the Vikings a 20-14 lead. It was still a one-possession game.

New Orleans went three-and-out on their next drive but banged-up Saints punter Tom Morstead gutted out a 54-yard punt that Marcus Sherels fair-caught at the Vikings 10-yard line. The Vikings moved the ball to their own 44-yard line before an Illegal block penalty was called on Kyle Rudolph. They were forced to punt two plays later. However, Quigley’s punt was deflected and traveled just beyond the line of scrimmage.

The Saints took over at the Vikings 40. After four plays they took the lead on a perfectly-thrown 14-yard touchdown pass from Brees to running back Alvin Kamara. The pass barely made it over Vikings linebacker Eric Kendricks. Lutz extra point good. 21-20 Saints.

With three minutes left in the game the Vikings had a chance to re-take the lead. The offense drove the ball to the New Orleans 35-yard line. On third-and-five the Vikings did not convert, and were forced to attempt a field goal. With 1:29 remaining in the game Forbath made one of the biggest kicks of his career, a crucial 53-yard field goal. The Vikings went up 23-21.

But with 1:29 left on the clock Brees was able to engineer an 11-play drive highlighted by a 13-yard completion to Willie Snead on fourth-and-ten. The play helped set up a 43-yard field goal by Wil Lutz. The kick was good. 24-23 Saints.

The game appeared all but over.

The Vikings got the ball back with 25 seconds left on the clock. Left guard Mike Remmers began the drive with a false start, which moved the ball back to the Minnesota 20-yard line. On first-and-15 Keenum hit Diggs for a 19-yard completion up the middle of the field.

The Vikings used their last timeout with 18 seconds left in the game. After two straight incompletions the Vikings faced third-and-ten from their own 39-yard line with ten seconds to go.

That’s when the most unbelievable 61-yard touchdown pass in NFL history occurred.

From the shotgun, Keenum took a five-step drop-back, then stepped into a throw he fired towards Diggs on the right sideline. The ball flew 35 yard in the air. Diggs, running to his left, spotted the ball, timed his jump, went up for it and caught the pass at his eyes with his back facing the end zone. As he landed back on the ground he saw through his peripheral vision that the defender had missed the tackle. He watched as the only defender that could have made a play on him was taken out by his teammate. Diggs turned up-field completed the 180 degree turn and placed his left hand on the ground to keep from falling over. He regained his balance and then ran the remaining 30-yards untouched into the end zone.

The most unforgettable finish in Vikings history concluded the first postseason game in U.S. Bank Stadium history in walk-off fashion.

The No. 2 seed Minnesota Vikings defeated the No. 4 seed New Orleans Saints by a score of 29-24 Sunday.

Stefon Diggs had six catches for 137 yards and the most memorable touchdown of his young career. Adam Thielen had six catches for 74 yards. Jarius Wright, who seems to be emerging as the team’s preferred No. 3 receiver, caught three passes for 56 yards. Kyle Rudolph had five catches for 28 yards.

Saints quarterback Drew Brees, who like Keenum also went 25 of 40 (62.5%), passed for 294 yards. He had three touchdowns and two interceptions. Receiver Michael Thomas had 7 catches for 85 yards and caught two of those touchdowns. Ted Ginn Jr. was targeted often, hauling in eight catches for 72 yards.

Stay posted to Vikings Territory for complete coverage of this week’s playoff matchup.