Danielle Hunter and the Value of the NFL Combine 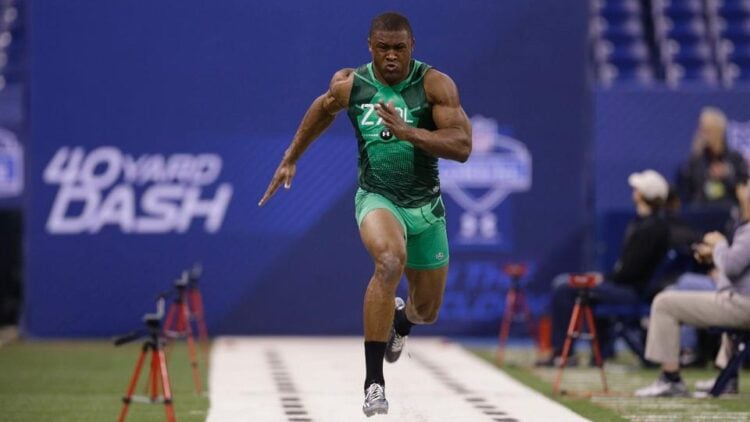 Danielle Hunter is a freak, but not in the “having a physical oddity and appearing in a circus sideshow” way. In the NFL, where a select few human beings can run faster, hit harder, and react more quickly than the rest of the world’s population, Hunter may be the rarest of them all.

Before he was selected by the Minnesota Vikings with the 88th-pick in the 2015 NFL Draft, Hunter was a starting defensive end for the LSU Tigers. A physical specimen then, he was known more for his comically large arms than his eye-popping statistics. Despite starting 23 straight games for the Tigers between 2013 and 2014, he finished his three-year career in Louisiana with just 142 tackles, 21 tackles for loss, and 4.5 sacks.

For a player with such gifts, the production didn’t match the physical presence. At 6’5″ and 252 pounds, Hunter generated a mere 1.5 sacks his junior year, despite playing 80 percent of the team’s defensive snaps. Entering February’s NFL Combine, scouts, analysts, and coaches knew Hunter would pass the eye test, but questions lingered on his shallow statistical output. As one former LSU coach said about Hunter before the event:

[quote_center]”If he walked into your living room, your eyes would pop out of your head. He looks that good on the hoof. He’s going to blow up the combine, and then ace all of the interviews and NFL teams are going to fall in love with him. He still needs someone to unlock all that talent, though.”[/quote_center]

His performance at the Combine, paired with an impressive Pro Day and interview process, was enough to warrant the gamble from Vikings general manager Rick Spielman. The rookie defensive end appeared in 14 games last season, finishing the year with 33 tackles, six sacks, and one forced fumble. Although he played in a rotational role behind Everson Griffen and Brian Robison, Hunter made the transition from “project” to player look easy, realizing his potential in a way so few can do so early in the careers.

In Indianapolis, Hunter blew away the competition at defensive end. His 4.57 40-yard dash was the fastest among all participants at the position, and he finished near the top of almost every other category. MockDraftable, an analytics website for fans of the NFL Draft, tracks and charts this data to create comparisons to other players and prospects. Hunter’s chart below emphasizes just how dominant he was, both in terms of size and performance in drills. The “freakish combination of size, athleticism and explosiveness” was on full display at the Combine, where personnel watched in awe as a muscle-bound human being glided through the 40-yard dash in a time normally reserved for running backs. Sometimes, though, “combine warriors” are nothing more than that — athletes who excel in drills, but can’t translate that same “wow” factor to the football field.

Players like Darrius Hayward-Bey (2009) and D.J. Hayden (2013) have been drafted too high because of their performances in a controlled environments. It’s easy to fall in love with their straight-line speed or the way they look in the NFL’s Under Armour get-ups, but the smart front offices don’t let the “flash in the plan” blind their analysis. The Vikings, fortunately, have been on the right side of this balance.

It appears at times that Spielman does take organizational risks in the NFL Draft — Jerick McKinnon/Anthony Barr in 2014 and Trae Waynes with the 11th-overall pick in 2015 — but these recent selections seem to have worked out in Minnesota’s favor. McKinnon is a highly valued “change-of-pace” back, Barr was Pro Football Focus’s top-rated outside linebacker in 2015, and Waynes showed promising signs of development against the Seattle Seahawks in the playoffs.

Like Hunter, each was a standout performer in the NFL Combine, and each was a “risky” draft pick by the Vikings. Waynes was the fastest cornerback at last year’s event in Indianapolis, and many questioned Spielman for using a top-12 selection on a player who was far too grabby and undisciplined at Michigan State. The same was asked about the uber-athletic Barr, who had little experience at UCLA as a linebacker, but was drafted by Zimmer to become the team’s starting strong-side linebacker.

Regardless, the Vikings stuck to their guns, selecting young players with tremendous upside to build the core of Minnesota’s roster. With Hunter, the pick could be the best of a strong 2015 class. He’s the rare talent — physically and mentally — whose athleticism and raw ability negate any question about his potential in the NFL.

[quote_center]“[Hunter’s] a physical specimen,” Spielman said after drafting him. “He plays extremely hard […] he’s raw. He’s a project. We’ll have to work with him […] but we feel that he has tremendous upside to grow as a football player.”[/quote_center]