Danielle Hunter: An Evolution from ‘Project’ to Player 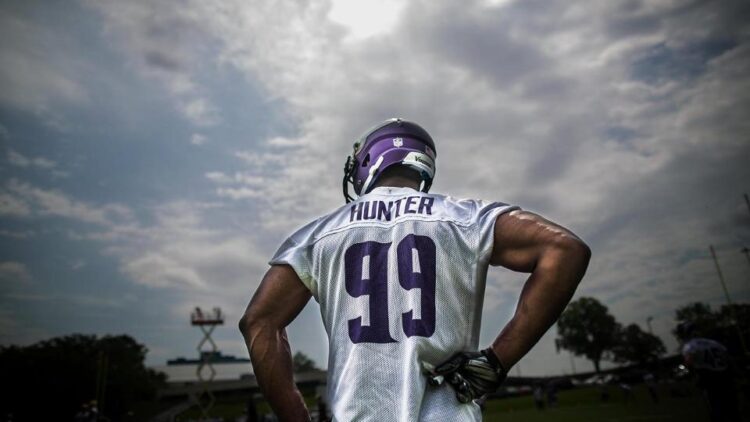 At (just barely) 21 years old, defensive end Danielle Hunter is the youngest player in the NFL. A common word to describe him coming into the league was “raw.” And while that may have been true, Hunter is rapidly overcoming that label and demonstrating that he can play a big role in the Vikings defense. The Daily Norseman‘s Andrew Renschen said it well Sunday:

Danielle Hunter evolving from project to player right before our eyes.

“[Hunter’s] a physical specimen,” Spielman said after drafting him. “He plays extremely hard […] he’s raw. He’s a project. We’ll have to work with him […] but we feel that he has tremendous upside to grow as a football player.”

Upside is right. While it may not have been written into the blueprints to give Hunter so much playing time this season, the defensive end has gotten more than a few snaps under his belt and is showing exactly the potential Spielman spoke of.

Hunter has seen action in eight games so far this season, including snagging the opportunity to start Week 6 when illness sidelined Everson Griffen. During that game against Kansas City, Hunter recorded four tackles and a forced fumble.

Zimmer affirmed Hunter following the game, while also comparing him to defensive tackle Sharrif Floyd in that he can occasionally overthink things and stifle some of that “true athletic ability.”

[pull_quote_center]When he’s just getting off the ball and doing some things, I think it starts to show up,” Zimmer said. “It’s very typical of young guys. He’s a terrific athlete, he’s a great kid, he’s smart. I think he will continue to get better as we keep going. I’m hopeful of that.[/pull_quote_center]

Vikings fans are hopeful of that, too. Sunday was an opportunity for them to catch another glimpse of Hunter’s skill set.

Prior to the Green Bay match up, Hunter said the following:

“I’ve seen [Rodgers] on TV, but I never thought I’d be playing against him someday,” Hunter said. “He’s a good dude, great quarterback, someone I’m looking forward to rushing against.”

In a game where Minnesota met a number of challenges, Hunter took the field to relieve a dinged-up Brian Robison and immediately put a nice stop on Packers running back Eddie Lacy. While Hunter may not have gotten that sought-after sack, he did come away with three tackles on the afternoon.

When the defensive end entered the NFL Draft, he was defined as an “athletic freak.” Listed at 6’5″ and 252 lbs, Hunter is built to not only wreak havoc on opposing offenses but also for quickness and agility. Hunter’s NFL Draft profile used words such as “fluid” and “agile” and focused on his ability to maneuver and chase down opponents for tackles.

In less than one season, Hunter is proving he was more NFL-ready than many expected. And although he’s quickly finding his groove in the pros, Hunter is careful about letting it go to his head.

“You never want to be too comfortable. I try to get better every game,” Hunter said in an interview for Vikings.com. “From college, Coach [Andre Patterson] has taught me a lot since college, about my rush angles, my hands and my speed. If you look at my college film and look at me know, I’m a completely different player than I was back in college and think I have improved a lot.”

Critics may point to Hunter’s age and use it as a knock against him, but he sees it as a way to do the necessary learning early on, “so by the time I get into my prime, I’ll be a dominating player.”

So far this season, Hunter has 16 tackles, 2.5 sacks and a forced fumble and is gaining much respect. In addition to Zimmer noticing clear development for Hunter, his teammates see the talent, as well. Both Robison and cornerback Captain Munnerlyn recently commented on the strides Hunter has taken as a rookie. Munnerlyn said the following:

[pull_quote_center][Danielle’s] growing each and every week. I know it doesn’t seem like he’s contributing that much, but he’s a guy that helps us out a lot. He comes in on third downs and rushes the passers and makes my job a whole lot easier getting to the quarterback.[/pull_quote_center]

Minnesota has plenty of excitement surrounding its team this season, heading into Week 12 with a 7-3 record and vying for a spot in the playoffs with a defensive-minded coach at the helm. Hunter is cementing himself as part of the Vikings future.

The sky is the limit for Hunter, and he has quite a bit of time to get there.  But don’t worry… this 21-year-old is climbing quickly.