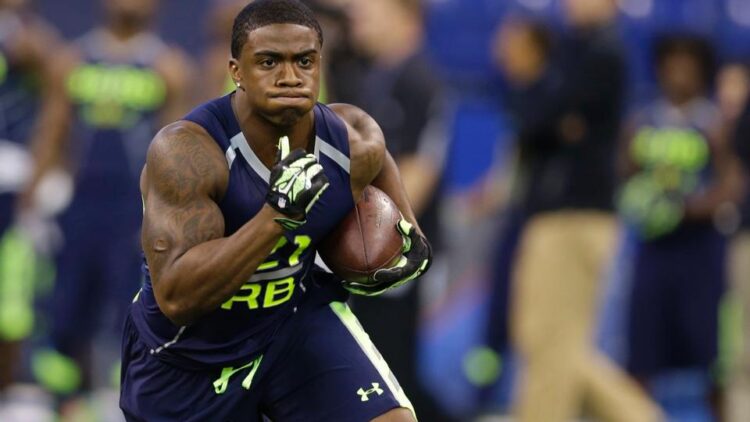 The 2015 NFL Scouting Combine kicks off at Lucas Oil Stadium in Indianapolis, Indiana tomorrow, signaling the start of a frenetic offseason for Vikings fans. It remains to be seen if Adrian Peterson will return to the team, and many wonder if the veteran’s replacement is on the current roster.

Although the Combine has become a giant media spectacle in recent years, its value cannot be underestimated. The week-long event gives scouts and coaches from all 32 NFL teams the opportunity to evaluate a slew of potential draft picks side-by-side. Film and in-game scouting are crucial to the process early in the year, but the Combine is one of the final “pieces in the puzzle” in determining whether a player moves up or down on a team’s draft board.

For players on the cusp, it’s a chance to prove they belong on an NFL roster. For Georgia Southern’s Jerick McKinnon, the 2014 Combine proved to be a showcase of the former triple option quarterback’s athletic abilities. McKinnon’s jaw-dropping performance last February vaulted him up draft boards, and he was eventually selected 96th-overall (3rd Round) by the Minnesota Vikings in the 2014 NFL Draft.

That week, McKinnon ran a 4.41-second 40-yard dash, had a 40.5-inch vertical jump, broad-jumped 11 feet, and bench pressed 225 pounds a freakish 32 times. He finished as the top performer among running backs in almost every drill, passing the “athleticism” test with flying colors. If there were any doubts about McKinnon’s game, they had nothing to do with speed or strength.

Analysts labeled McKinnon as a “wild card”, with ESPN’s Mel Kiper Jr. calling the running back a steal past the third-round:

[quote_center]”McKinnon is easily the top athlete among draft eligible running backs and displayed SEC caliber speed against Florida. He comes from a team that ran the triple-option, so McKinnon might need some time to get comfortable in a more traditional scheme that forces different reads.”[/quote_center]

At Georgia Southern, McKinnon played both quarterback and running back in the triple option, a system that puts much of the offensive burden on the signal-caller. While McKinnon did throw the ball, he was used much more extensively as a runner. In his collegiate career, he rushed 619 times for 3,834 yards and 42 touchdowns, averaging 6.6 yards per carry. The triple option creates holes and opportunities in a different manner than most NFL offenses, helping to inflate McKinnon’s impressive rushing numbers.

Like Kiper Jr., many scouts and analysts worried that the former triple option star McKinnon would struggle with the mental side of the game — reading blocks in the running game, choosing the correct cutback angle, and identifying blitzes as a pass protector. Arif broke down McKinnon’s season late last year, a season in which the running back answered most of these questions.

McKinnon appeared in 11 games (starting in 6) for the Vikings and rushed 113 times for 538 yards, averaging 4.8 yards per carry. Though he finished the season on Injured Reserve with a back injury, he quickly vaulted Matt Asiata as the starter when healthy. McKinnon brings more versatility to the Vikings’ offense, where he can use his burst out of the backfield as a runner and receiver.

In a recent interview with the Star Tribune’s Matt Vensel, McKinnon expressed satisfaction with his rookie season. “I was happy with how the season went. It was a blessing, just being able to play in the NFL, a dream come true.” In the next few weeks, McKinnon will finish his recovery from back surgery and transition to offseason training, where he hopes to add needed strength. “I’m expecting bigger and better things for myself,” he said.

Considering the current situation surrounding Adrian Peterson, McKinnon may start the 2015 season lined up behind Teddy Bridgewater. He’ll need that added strength to bear the load of a full NFL season and take the punishment that stems from running “between the tackles”.

Looking back at the 2014 NFL Combine, McKinnon was a lesser-known player who made his presence felt with an exceptional showing on the field. There may not be another player with McKinnon’s combination of size, speed, and explosion in this year’s group, but look for prospects like Michigan WR Devin Funchess, Oregon State DE Obum Gwacham, and Florida OT D..J. Humphries to make a similar splash.

We look forward to covering the 2015 NFL Scouting Combine and following all of the week’s potential Vikings news.