Trae Waynes Selection And The Reactions That Followed 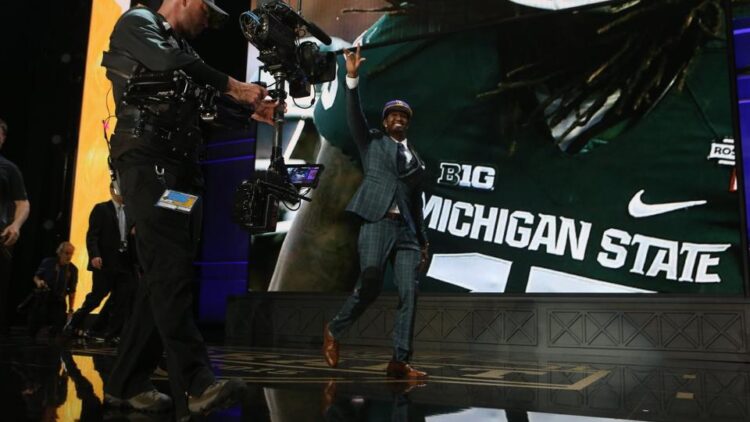 Not everyone was a fan of the Minnesota Vikings selecting cornerback Trae Waynes with the 11th overall pick last night, but the readership here at VT weighed in on a poll last night and the results are mostly favorable.

In the poll below, with 392 votes placed as of this posting, 87% of our readers gave the selection either an “A” or “B” grade. Instant reactions are, of course, not an accurate reflection of how a player might actually produce in the NFL, but who doesn’t prefer a little optimism over sincere disappointment?

Lindsey has done a great job of getting the immediate reactions from Rick Spielman and Mize Zimmer at Winter Park, in addition to Waynes himself this afternoon, but I wanted to look outside of the team here at VT and see what kind of draft grades are floating about.

This is pretty much a random sampling of what people are saying about the selection.

DAN KADAR OF MOCKING THE DRAFT:  Waynes is regarded by some as the draft’s top cornerback, but does he make the Vikings better than a wide receiver like DeVante Parker would? I don’t think so. Waynes is a pro-ready choice, and this isn’t really a reach. His tackling, however, needs to be improved, and you wonder how well he was coached up at Michigan State if his ceiling is low. Regardless, he’s a Day 1 starter.

WALTERFOOTBALL.COM: It was either Trae Waynes or DeVante Parker, and either would’ve made a ton of sense. But whereas Parker was the No. 3 receiver, Waynes was the top cornerback on the board. With that in mind, doesn’t it seem like a huge steal that the Vikings were able to obtain the No. 1 corner in the draft with the 11th pick? This is a strong choice, as Waynes fills a need as a starter across from Xavier Rhodes. The Vikings had to find another corner to help them against all of the talented receivers on Green Bay, Chicago and Detroit.

MARK MASKE OF THE WASHINGTON POST: Trae Waynes was the draft’s top cornerback and probably worthy of a top-10 choice. The Vikings managed to get him just outside the top 10, at 11th.

JOSEPH ZUCKER OF BLEACHER REPORT: The Vikings should have their CB partnership of the future in Trae Waynes and Xavier Rhodes. Only critique I have is that Minnesota should’ve prioritized Parker over Waynes.

FREDDIE BOSTON OF LOMBARDI AVE (Yes, A Packers Site): This pick makes a lot of sense for the Vikings. They are slowly building a top secondary in Minnesota, with Trae Waynes joining Xavier Rhodes at cornerback. In this division, that is absolutely crucial. When you’re facing Jordy Nelson, Randall Cobb, Calvin Johnson,Golden Tate, Alshon Jeffery and now Kevin White twice a year, you best have good corners. Waynes will fit the Vikings’ system perfectly, and will be expected to be a day one starter. Many liked Marcus Peters better, but with the off-the-field issues, I’m fine with them taking Waynes at No. 11.

CBS SPORTS: This is the best corner in the draft and Mike Zimmer loves corners. He and Xavier Rhodes will form a nice duo in Minnesota.

BRYAN PEREZ OF DRAFT BREAKDOWN: The Vikings were up next at No. 11, and I was all but convinced that they would gobble up DeVante Parker (WR, Louisville) to pair up with Teddy Bridgewater.  Instead, they chose Trae Waynes (CB, Michigan St.) to enhance their overall pass defense and to help offset the receivers in the NFC North.  I don’t hate the pick, but they had a chance to do something similar to what the Raiders did; The Vikings passed on the chance to give their franchise quarterback a blue-chip receiver.  I have a hunch they could end up regretting that decision.

DID NOT PROVIDE A LETTER GRADE

MATT FALK OF DRAFT SEASON: Waynes has been linked to the Vikings for weeks and it finally comes true. Adding him along with Xavier Rhodes gives the Vikings and Mike Zimmer one of the best young corner duos in the NFC.