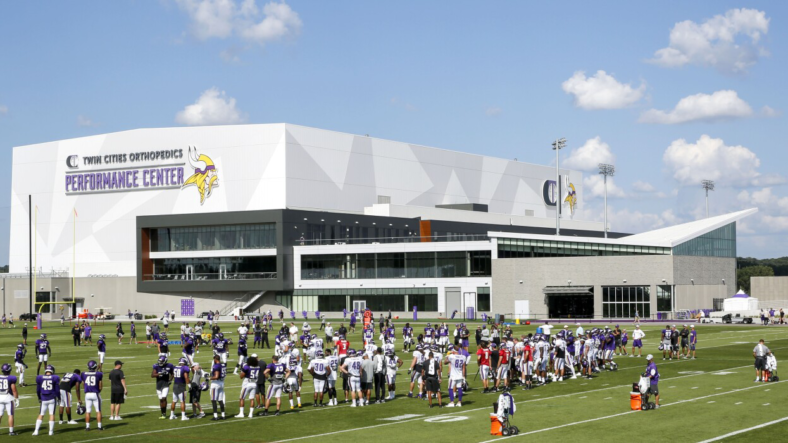 Earlier this week the Minnesota Vikings officially announced the dates and schedule for their Training Camp practices in 2022. Along with the full slate of walk-thrus, meetings and practices, they highlighted 14 total practices that will be open for fans to attend and get their fill of Vikings football weeks before the season kicks off.

Whether you’ve taken in the Training Camp experience before or not, this season is sure to be different with adjustments in schedule, new plans in the mix and a new group of leadership both in the front office and on the field.

To help the adjustment process, we’ve highlighted FIVE things that you should be looking forward to for Minnesota Vikings Training Camp in 2022 that might not have been there in the past.

Traditionally the “night practice” which is also highlighted as the “passing practice” and some sort of family fun night has been held on a Saturday night. This year it makes it’s Monday Night debut. First at Blakeslee Stadium down in Mankato, MN and most recently in Eagan, MN on Twin Cities Orthopedics Field. While the team doesn’t unveil their secret plays and schemes, they do open it up a bit to entertain the thousands of fans on hand. We’ve run live KFAN broadcasts from the press box and the full VEN force is on hand to cover the event as if it were some sort of miniature gameday experience. There are opportunities for autographs, the players address the crowd after the game and throw mini footballs into the stand and all the plaza fun and games you normally get at training camp are on full display. The move to a Monday night could make it an even hotter ticket for those in the Twin Cities but might be hard to swing for purple fans coming from out-state. Still, it’s a fun family experience that is the most entertaining “practice” you’ll get from the Training Camp sessions. This year’s night practice will be held on Monday, August 8th

Sure position battles aren’t really anything new to 2022 Training Camp but when you’re introducing a entirely new offense and switching the base defense to a 3-4 from a 4-3, there will most certainly be more positions up for grabs and more opportunities for young players to turn heads. It’s still a transitional year as the new GM and new Coaching staff develop their team around their scheme, so 2022 will see some players from last season lose reps and some new to the squad gain them. Training Camp and the preseason games are when most of those decisions are made. Just this week Dustin Baker highlighted 4 of the Main Training Camp Battles that we should be watching. Make mental notes of those battles and pay attention to what you see if you get out there or what you’re reading if observing from afar.

As noted above, this is a totally new team with a totally new scheme and so far (at least on the offensive side) the players are really excited for what they’re seeing! We’ve heard from Justin Jefferson, Kirk Cousins and Adam Thielen already about how excited they are for this new offense and they’ve only really dipped their toes into the water with it so far at OTAs. The fact that the players are excited is something that should really excite the fans, especially those that play fantasy football and pay closer attention to that side of the ball. Adam Thielen told KFAN that you’ll notice a difference right away when you see the new offense at training camp, that’s sweet!

I’m also really curious to see Za’Darius Smith and Danielle Hunter unleashed in the new 3-4 scheme. How will it impact veterans like Harrison Smith and Patrick Peterson? Where will the youngsters fit in? How will they replace Anthony Barr? All intriguing things to note when camp kicks off!

The Joint Practice with the 49ers…

This will certainly be one of the highlights of camp for both the players and the fans but on August 17th and 18th the Vikings will play host to the San Francisco 49ers at TCO Performance Center for a set of joint practices leading up to their shared second preseason game.

Joint practices are always fun because it’s one of the first opportunities that you get to see how your team stacks up against actual competition. Pride is on the line so players kick up the intensity a bit and practices are generally more lively. Throw in the fact that there are some interesting story lines happening with the 49ers as well and you’ve got a few days set to close out camp that are certainly going to be worthy of highlighting.

Access to the best practice facility in the NFL…

I’d be lying if I said that I have a ton of experience with how and where other teams host Training Camp when it comes to fan access and fan experiences, but I feel confident in saying that nobody can possibly do it better than the Vikings do. From family fun on the TCO Field with kids activities and bounce houses, to autographs, to comfort lounges and different vantage points for fans, Twin Cities Orthopedics Performance Center was built with fan experience in mind. There’s no lack of food, seating, entertainment or football at all.

If you have any interest in checking out preseason, training camp football this has to be the best experience there is, hands down.