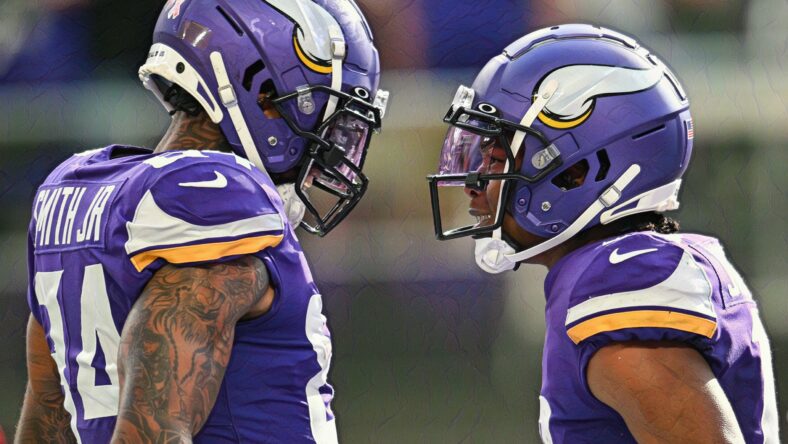 The 2022 Minnesota Vikings have nine games in the books, racking up eight wins — and apparently winning “midseason awards.”

Unsurprisingly, it wasn’t a quarterback, running back, or defensive player to earn the recognition from Bleacher Report. The sports media site tabbed Justin Jefferson for the midseason Offensive Play of the Year award.

Jefferson is on pace to record 2,002 receiving yards and 9 touchdowns.

Miami Dolphins wideout Tyreek Hill leads the NFL in receiving yards but has played one more game, for now, than Jefferson. Hill is on track for 1,952 yards through 10 weeks. So, per Jefferson’s league-leading pace, Bleacher Report felt it wise to nominate Jefferson over Hill.

Indeed, Jefferson is authoring the best season in the Vikings 62-season history per receiving yards. He isn’t quite the touchdown merchant Randy Moss was about 20 years ago, but Jefferson is unrivaled via churning out the receptions and yardage.

David Kenyon from Bleacher Report said about Jefferson in the midseason awards article, “The third-year receiver is having a Cooper Kupp-type impact for the Vikings. Through nine games, Jefferson has racked up 69 catches for 1,060 yards and four touchdowns. He’s generated more receiving yards than Minnesota’s next four highest pass-catchers combined.”

Jefferson is just 23 years old and on an electrifying pace to defile NFL record books.

“Jefferson would become the third receiver to earn the OPOY honor in the last four years. And if he doesn’t, there’s a decent shot Miami Dolphins star Tyreek Hill will instead,” Kenyon added.

On Sunday versus the Dallas Cowboys, the LSU alumnus needs 88 yards to tally the most receiving yards in NFL history during a player’s first three seasons. And for context, the 2022 season still has eight games to go for Minnesota. Barring injury, the pseudo-record in Jefferson’s.

Jefferson became a household name last weekend — if he wasn’t already — with this preposterous catch on 4th and 18 to keep the Vikings hopes at victory alive.

Accordingly, he’s receiving respect from national media outlets — to the tune of Offensive Player of the Year kudos.

The Vikings are 1.5-point home underdogs on Sunday against Dallas.