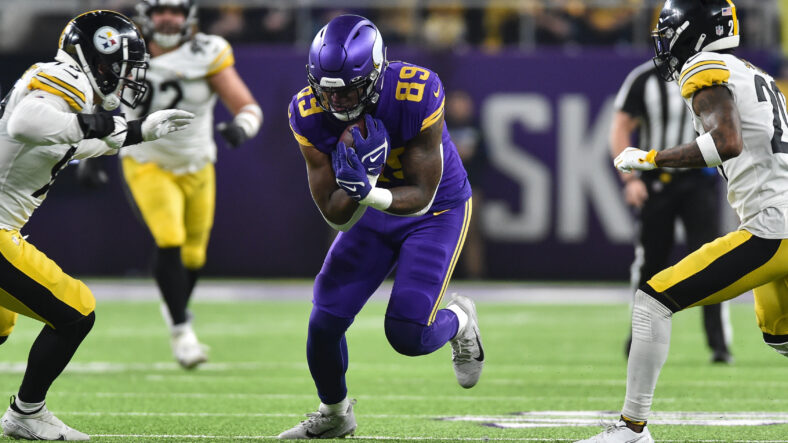 One might not think it possible for a free agent to get suspended, but it’s evidently a thing, as the NFL laid down the law on Wednesday.

Chris Herndon, who played for the Vikings in 2021, was suspended by the NFL for eight games, amounting to the remainder of the regular season.

Herndon is a free agent, making the situation a little odd. The reason for the suspension was undisclosed.

All that is known in the immediacy of the suspension is that Herndon is disqualified from the next eight games.

The Miami alumnus was suspended for four games in 2019, violating the league’s substance abuse policy.

Herndon played 16 games for the Vikings in 2021 but was only allotted seven targets in the team’s passing game. He wound up with 40 receiving yards and a touchdown. Drafted in the 4th Round of the 2018 NFL Draft by the New York Jets, Herndon collated an impressive rookie season, tallying 502 receiving yards and four touchdowns on 56 targets four years ago. Since then, however, Herndon has battled injuries (2019) and irrelevance, especially the latter in Minnesota.

Any player who accrues 40 receiving yards and a solo touchdown in a single season is mostly anonymous on a football team, but such was not the case for Herndon.

Onlookers of the Vikings knew all about the 26-year-old TE because of his arrival to Minnesota. Former general manager Rick Spielman acquired Hernon via trade from the Jets — in controversial fashion. Tight end Irv Smith was lost for the year to a meniscus tear at the end of preseason, and Spielman sent a 2022 4th-Round draft pick to New York for Herndon — an astronomical pricetag for a man who ended up with seven passing-game targets.

The move was described as “panicky” and quasi-irrational. Tyler Conklin became the TE1, while Herndon was a total nothingburger. And a 4th-Rounder for a TE2 or TE3 is unappealing.

Herndon has produced 78 receptions for 836 yards and eight touchdowns in his career.

He was a member of the Saints for a few weeks in August but was released before the start of the regular season.

Dustin Baker is a political scientist who graduated from the University of Minnesota in 2007. Subscribe to his daily YouTube Channel, VikesNow. He hosts a podcast with Bryant McKinnie, which airs every Wednesday with Raun Sawh and Sal Spice. His Viking fandom dates back to 1996. Listed guilty pleasures: Peanut Butter Ice Cream,” The Sopranos” and The Doors (the band).