PFF Big Board Has 8 First Rounders Left for Vikings 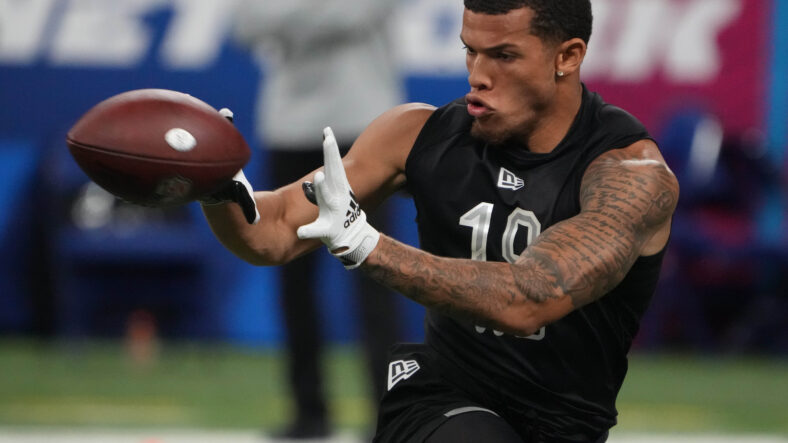 The NFL draft is always a matter of opinion, and everyone is different. The choice by the Minnesota Vikings to trade down from 12 with the Detroit Lions was far from popular.

The Vikings received picks 32, 34, and 66 in exchange for 12 and 46. Whatever your initial thoughts are on the trade, it is essential to look at the draft board with Lewis Cine, now a Viking, and Minnesota set to pick second in round 2.

PFF’s big board currently has eight players they ranked as first-rounders, left on the board for the Vikings to choose at 34.

Every big board is different but what is undeniable is there are some good footballers left on the board who could have been selected in the first round. Hypothetically, if the Vikings had traded with the Chiefs for their two first-round picks (29 & 30) and their third-round pick for 12 and 46.

I question whether there would be as much uproar in some quarters about the trade value. There is no difference in the value of picks 29 and 30 and picks 32 and 34, and the player you will get in this particular draft. The players weren’t there to net you a big haul from a team desperate to do something like draft a quarterback of the future.

Let’s look at these eight players the Vikings could select tonight in the second round.

The Vikings don’t need a tackle. The excellent news is Bernhard Raimann is a candidate to be taken in the one pick before the Vikings, which would give Minnesota the chance to take their top guy.

Probably the biggest surprise to fall out of the first round and if he doesn’t come off the board at 33. He might be difficult to pass up, a teammate to Lewis Cine on the dominant National championship-winning Georgia defense. Bringing in Nakobe Dean alongside Cine is really appealing to me. He is my undoubted best player available at the start of the second round.

I think the ranking for Skyy Moore is a bit high here, and early second round is more in line with my thinking. He is a talented receiver who makes defenders miss.

The obvious choice. Andrew Booth Jnr was my prediction for the Vikings first-round pick. I’m surprised he’s still on the board, but the Vikings can still get their outside cornerback. If you had offered me both Lewis Cine and Andrew Booth for the Vikings before the draft started, I would have accepted without hesitation.

The Vikings don’t need a big nose tackle like Travis Jones with Harrison Phillips and Dalvin Tomlinson on the roster unless they are looking for a cheaper replacement for Tomlinson, either now or further down the line. That can be done later in the draft.

This is an interesting one with the Green Bay Packers reportedly attempting to trade with the Vikings at 32 to select George Pickens and keep Aaron Rodgers happy. Pickens was seen as a possible WR1 in this draft before missing all but the last game of his final season in college football due to injury. He is a very good athlete with downfield speed, agility, and body control and has very good hands. For those who wanted another stud receiver, Pickens can be that guy — with the bonus of taking him away from the Packers.

Suppose you want Kwesi Adolfo-Mensah to spice things up by selecting the quarterback with supposedly the highest ceiling in the draft. Then that can still happen too. No one deemed Malik Willis promising enough to take the plunge in the first round.

Jalen Pitre is a good football player. However, after drafting Lewis Cine in the first round, I think we can rule out drafting someone who played safety and or slot cornerback.

That’s the eight, but the good players don’t stop there. Edge Rushers Boye Mafe, David Ojabo, and Arnold Ebiketie are also still on the board. The second round is the strength of this draft. Being able to select a player at the top of the round is a good place to be.