Two Jeffersons Are Better Than One 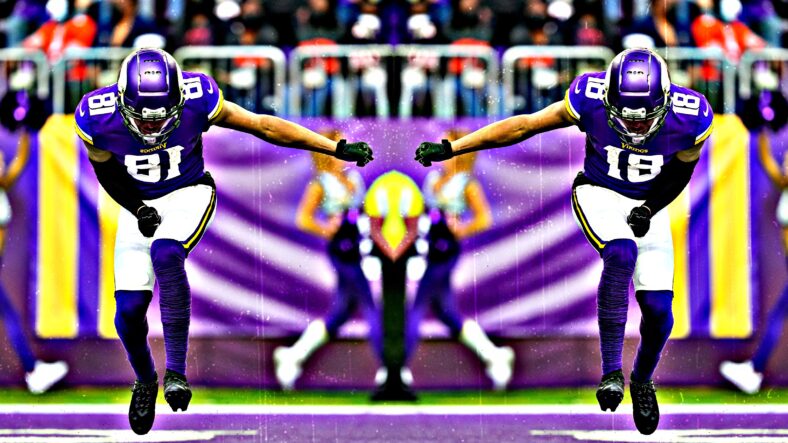 The Vikings appear to be set at the wide receiver position for now. They have the stars Justin Jefferson and Adam Thielen, the third option KJ Osborn and a bunch of other alternatives, like Olabisi Johnson and Ihmir Smith-Marsette.

Many teams in the league are doing way worse on the position. Some teams struggle to find a true number one pass-catcher. Others don’t have depth. The Vikings have all of it, but there is never something like ‘too many weapons.’

New Head Coach Kevin O’Connell is expected to run more plays with three or more wide receivers. Therefore, the Vikings could look to add more of them and even try to upgrade the third wide receiver. Maybe they even use the 12th overall pick on a wideout to replace the soon-to-be 32-year-old Adam Thielen in the next couple of years.

Wilson was part of a dangerous aerial attack at Ohio State. The trio of wide receivers Garrett Wilson, Chris Olave, and sophomore Jaxon Smith-Njigba was feared all over the country. But they were not just teammates. They complemented each other really well. Smith-Njigba led the team in receiving yards, Olave in touchdowns, and Wilson was second in both categories.

Born in Columbus, Ohio, Wilson moved to Texas when he was eleven years old. As a member of Lake Travis High School, he won the 6A state championship in 2016 while breaking most of the receiving records of his school, catching 204 passes and scoring 55 touchdowns while gaining 3,359 total yards.

The five-star recruit had a decision to make after receiving more than 20 offers, including Alabama and Georgia. He decided to go back to his home state and committed to Ohio State. His receptions, targets, yards, touchdowns, and PFF grade improved in each of his three seasons.

Wilson caught 30 of 42 targets for 432 yards and five touchdowns as a freshman. In his sophomore season, the Buckeyes moved Wilson from the outside receiver position into the slot, where he played in about 67% of his snaps. Wilson had 723 yards and six touchdowns in just eight games in the shortened 2020 season. One example of his outstanding play is a big achievement of his. He became the second Buckeye to record four straight games with 100 receiving yards. The other was Vikings legend Cris Carter, who had such games five consecutive times in 1986.

In his third season, the junior reached 1000 receiving yards for the first time, 1058 to be exact, in addition to 12 touchdowns. The talented receiver moved back to the outside most of the plays. He played about 18% in the slot. After the regular season, Wilson opted out of the Rose Bowl and declared for the NFL Draft.

The Buckeye had an impressive showing at the combine. He ran the 40-yard dash in 4.38 seconds and had solid jump test results. His height and weight were measured at just a quarter of an inch under 6 feet and 183 pounds. PFF has him ranked at number twelve on their big board, the second-best wide receiver. Meanwhile, NFL Network expert Daniel Jeremiah ranked Wilson in the fifth spot of his updated top 50 players.

The most impressive thing on tape is his double move. It’s almost impossible to cover him in the open field after a double move. He uses his high-level speed to get open and is a true big-play threat on any given play. When he has the ball in his hands, he makes people miss. Speed and insane shiftiness is his calling card. Per PFF, he forced 19 missed tackles, which ranks him 11th among wide receivers in the nation. Another strength is his versatility. Kevin O’Connell could use him outside and inside, on deep and short passes. He’s dangerous on screens and jet sweeps.

Six drops are too much for a player of his caliber. The 7.9% drop rate ranks him 156th in the nation. In addition, Wilson has to work on his ability to complete contested catches. He rarely completes them and has to get himself into a better position. The wideout has to track the ball better to do that. Wilson needs to learn to get free against press coverage, but that should be coachable with his abilities. He just needs to copy his route running moves from the open field to the line of scrimmage.

The fluid route-running, especially the double moves and athleticism, make Wilson look like a carbon copy of Jefferson on some plays. Their catching style looks totally similar. Another similarity is the running after the catch. They can make people miss with their agility. Besides that, both play stronger than their weight would suggest.

Of course, they share some of the flaws, too. Jefferson had seven drops in 2021, while Wilson had six. In addition to that, both star receivers struggle with contested catches.

My grade for him: 85.75 – mid-first-round pick. In most mock drafts, Wilson is selected in the low teens, where the Vikings draft, too. There’s a good chance he will be the first wide receiver off the board. If Wilson can work on his game and become a little more polished, he can be one of the top receivers in the league. If he can´t, he will still make an immediate impact on his new team but is probably limited to a WR2 spot.

Kwesi Adofo-Mensah could pull the trigger and draft the Ohio State Buckeye. Wilson would be the third wide receiver on the depth chart on day one and would probably replace Adam Thielen as WR2 sooner rather than later. The offense could be nearly unstoppable with that many weapons.