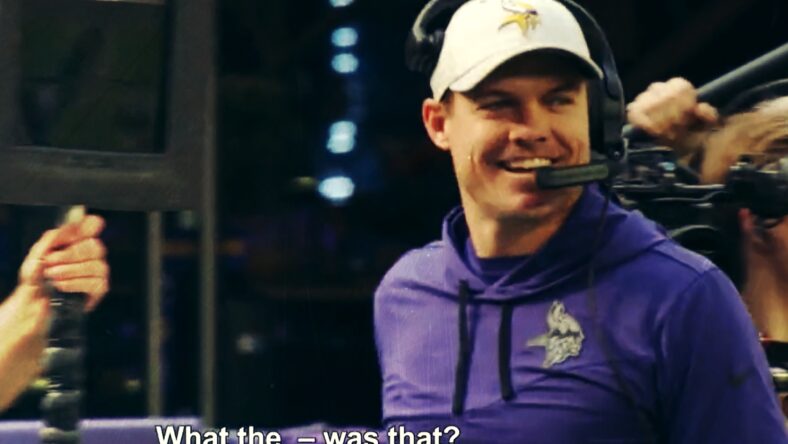 Make no mistake, the Minnesota Vikings zeitgeist has changed immensely from 2021 to 2022. It’s evident all over the place.

Last year, Minnesota was mired in headstrong mediocrity, clawing at wildcard berths that didn’t pan out. Fast forward 12 months, and the Vikings grip the throat of the Green Bay Packers with a 3.5-game lead in the NFC North.

Most credit the Vikings new coaching staff — rightfully so — and front office because the roster construction largely mirrors the 2021 edition. So, what precisely changed?

Well, it can be as simple as a “new pair of eyes,” particularly those in Kevin O’Connell’s orbital sockets. The 2022 Vikings are winning squeaker games that the 2021 Vikings lost. Plain and simple.

Too, the culture is lighthearted, refusing constraint to fear-based dealings. The 2022 Vikings have fun, smile, and win. Last year’s group went through the motions, grimaced, and lost.

On Thursday, NFL Films released footage of Kirk Cousins’ unlikely touchdown scamper against the Arizona Cardinals in Week 8, complete with reaction from his head coach. The play was evidently designed to be profitable and fancy but was not intended to involve a Fran Tarkenton-like scramble.

Truly flummoxed, O’Connell envisioned something different — probably a laser of a throw to somebody — but instead, he boarded a brief anxiety train, fueled by fear of a Cousins fumble and “what is he doing?” panic.

Cousins quelled the unease by scoring, with his best rush as a Viking and possibly of his career.

O’Connell reaction? “What the f-ck was that?”

The man was just as puzzled as you were, as Cousins gave the Vikings an early 7-0 lead. The margin would grow to 11, Minnesota would squander it all together, and later win by eight points. Such is life for the 2022 Vikings.

Cousins used to take off and run the ball semi-regularly in Washington as the team’s QB1. Hell, O’Connell even worked there with Cousins. Perhaps more rushing proficiency is on the way, especially after O’Connell learned that Cousins has a wee bit of Tarkenton DNA in the basement.