The Vikings Are Not Afraid of Aaron Rodgers 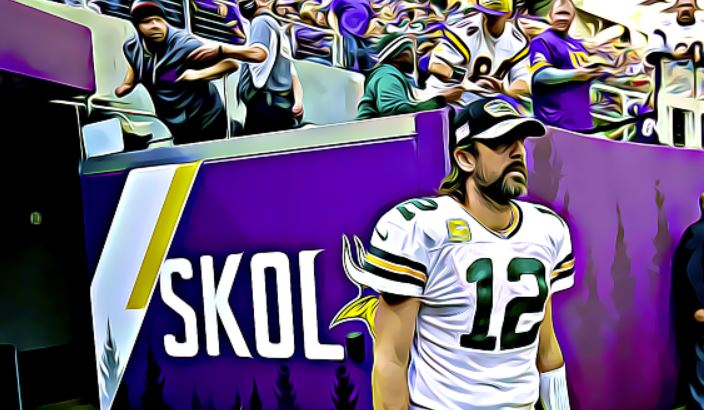 Rumors that Aaron Rodgers would leave the Green Bay Packers started at this time last year. However, on March 8th, the four-time NFL MVP decided to come back and continue his hall of fame career in Wisconsin. Following the announcement, the Packers were penciled in as the winner of the NFC North.

Why the Vikings Should Not Be Scared

While having one of the best quarterbacks in league history in the division is never a good thing, the Vikings should not be scared of him, if we can believe the words of NFL Network’s Kyle Brandt. On Tuesday’s episode of his show “Good Morning Football,” he talked about the “Black and Blue Division.” He thinks the Vikings will be a legitimate threat to dethrone the Packers.

“In the last seven years, Aaron Rodgers has played against the Minnesota Vikings 12 times. He started and finished the game 12 times. How many times do you think, he has won? Six. Six times. .500%. Right down the middle. That´s it. During that time, the Vikings have won in Lambeu, Kirk Cousins has won in Lambeu, he has also tied in Lambeu. They beat the Packers pretty much every year, including last year and the year before. Do not confuse the sins of the Bears and Lions with those of the Vikings. This is a real back and forth here.”

Indeed, the Vikings have beaten the Aaron Rodgers-led Packers more often than other teams. Aaron Rodgers’ Packers have won 63 of 90 games in that span, the Vikings games excluded. That equals a 70% winning record, while he just won 50% of his games against the Vikings. Against the Bears, his record is 11-2 during the same time frame, with the last Bears victory dating back to 2018. The Lions have won three of the last 11 games when Rodgers started and finished the game.

Brandt continued with more reasons why nobody should count out the Vikings in the division title race:

“And now the Vikings have eight draft picks, including the number 12 pick. They have a sparkly new whiz kid at head coach. They have Za´Darius Smith from the Packers. And the Packers are showing up with who I´m calling Mr. X receiver. I don´t know who that is. Could be a first round pick, could be a third-round pick. Could be Jarvis Landry.”

Kyle Brandt about the Vikings and Packers offseasons

The Vikings showed up to the voluntary offseason program on Monday with some new faces. Players and fans are excited to see their new coaching staff and newly added players, especially Za’Darius Smith.

When the Packers start their program next week, they will miss some of their biggest names. Smith and cornerback Sullivan play for the Vikings, star receiver Adams plays for the Raiders, Valdes-Scantling is a member of the Chiefs, and the versatile offensive lineman Turner is a Denver Bronco. The top wideouts on the roster are Allen Lazard, Randall Cobb, and Amari Rodgers.

Can Rodgers Still Carry the Team?

Brandt concluded with a summary of why he is high on the Vikings this season:

In the past, the Packers have not done well if they relied too much on the abilities of their star quarterback and did not surround him with a good team. The team around him still has some good pieces, but they need to bring in some new talent in the draft to be in a class by themselves in the NFC North.

At the very least, the Vikings should be able to make the division race much closer than it was in recent years. They are widely considered a sleeper team around the stars Justin Jefferson, Kirk Cousins, and Dalvin Cook on offense and their new pass-rushing duo Danielle Hunter and Za’Darius Smith and bank on the fact that coaching was the biggest issue in the last season.