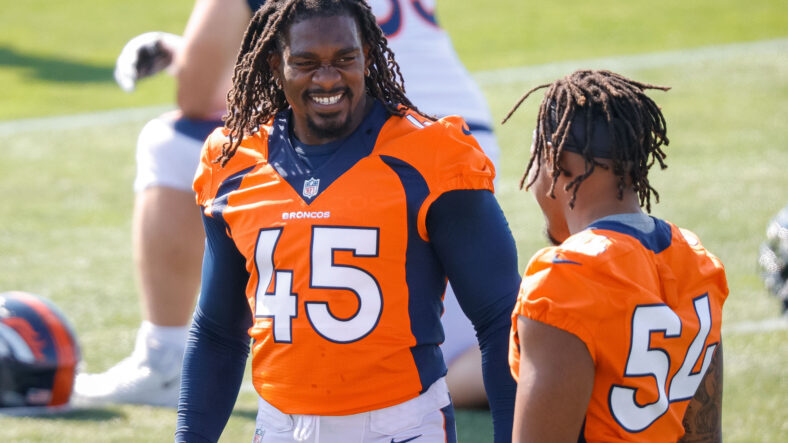 Earlier in June, Bleacher Report recommended the Vikings trade away their veteran stars Eric Kendricks and Patrick Peterson for peanuts. Now, PFF wants the Vikings to add a player on a position without need. Doug Kyed published his article ‘One trade or free-agent acquisition for all 32 NFL teams before 2022 training camp,’ and the Vikings recommended acquisition is a strange one.

The free-agent Johnson played for Ed Donatell’s defense in Denver. The new Vikings defensive coordinator could reunite with his former defender.

“Johnson earned an 81.9 overall defensive grade while playing under new Vikings defensive coordinator Ed Donatell in Denver. He tore his pectoral in October but would add another effective option to a Vikings group that already includes Eric Kendricks and Jordan Hicks.”

In the three seasons in Denver, Johnson started 34 of 38 games he appeared in. He also finished twice as the third-best linebacker per PFF, including 2021. The former Bronco is a good player but wouldn’t make much sense on the Vikings.

As Kyed said, the Vikings linebacker room already has two veteran starters. Kendricks and Hicks are both 30 years old, just like Johnson. Kendricks has been one of the elite linebackers in football for quite some time. Jordan Hicks, meanwhile, is a reliable linebacker who rarely missed time. In the last three years for the Cardinals, he did not miss a game. It’s time to develop one of the young guys behind them.

Asamoah was the 66th overall pick in the 2022 draft and already turned heads in the OTAs. The Vikings also employ the 2021 third-rounder Chazz Surratt. Blake Lynch is also on the roster and had some excellent performances in 2021. Troy Dye, a 2020 fourth-rounder, is also competing.

Johnson would certainly be an upgrade over some of them. However, the Vikings have to do anything in their power to develop one of the younger players not to waste resources. Especially the third-round picks invested in Asamoah and Surratt are significant investments.

The remaining cap space could go into the defensive line to add a pass rusher like Ndamukong Suh, add depth to the edge rushers, bring in another cornerback, or even another weapon of offense. Eric Ebron and Kyle Rudolph could be useful backups for the tight end Irv Smith, and big-name receivers like Julio Jones and Odell Beckham Jr. are still available. They could even elevate the offense to a higher level.

Kyed wants the Packers to sign T.Y. Hilton. The former Indianapolis Colt struggled with injuries in recent history, but he’s an intelligent veteran. Hilton could probably build trust with MVP Aaron Rodgers quickly and help the team in the near future.

The Lions would sign Jackrabbit Jenkins. The cornerback somehow managed to earn a PFF grade between 65 and 70 in five consecutive seasons, but he’s almost 34 years old, and the Vikings’ aerial attack, especially Justin Jefferson, could be too much for him.

Bears sign Emmanuel Sanders. Sander is 35 years old and no longer in his prime. However, Bears passer Justin Fields should get all help possible. Sanders provides leadership to a young offense and would be the second dependable receiver after Darnell Mooney.