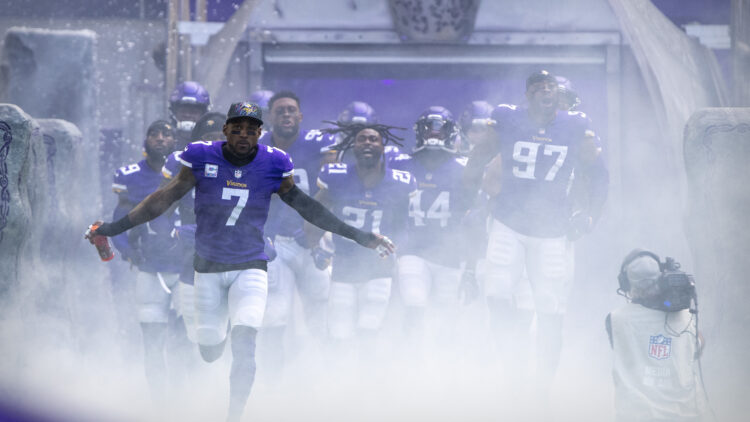 The offseason is the time for speculation and rumors. Bleacher Report’s Ian Wharton came up with one trade idea for each NFL team. The Vikings are featured twice with trade scenarios that don’t make a lot of sense for the team.

Last week, Dan Graziano from ESPN had the idea that the Vikings could trade for Baker Mayfield. However, Vikings fans are finally united in their reaction to that suggestion, as it would not make sense for multiple reasons. First of all, Cousins is undoubtedly better. That would make Mayfield an expensive backup. The Vikings have some cap room but not enough to fit the fifth-year option worth $18 million. Not only that, but his contract will also expire after the season, and he’ll be a free agent. Signing him next offseason makes more sense than trading for him now.

Wharton, however, comes up with the idea of trading two veteran players away. The Vikings don’t have a tradable asset sitting on the bench, so any trade would weaken the starting lineup.

Instead of trading for a player to improve the team, the proposal is to trade away Peterson for a 2023 sixth-round pick.

“Instead of acquiring new talent, the Minnesota Vikings would be best served by opening an opportunity for one of their young players to emerge.”

Wharton, wants to trade away Peterson

First, there are more than enough opportunities for either of the young cornerbacks, Andrew Booth Jr and Cameron Dantzler. They both have the chance to clinch the starting spot for Week 1 against the Green Bay Packers and just have to beat out each other.

In addition to that, having the veteran Peterson around will be very helpful for the young players. Peterson is the mentor the young guys need. In 2020, the Vikings went into the season with two rookies in Gladney and Dantzler and the third-year player Mike Hughes. The results weren’t pretty.

The team will be better short-term and long-term with Peterson than with an additional sixth-round pick.

Wharton didn’t stop after trading away the most reliable cornerback of the team. He also wants the Denver Broncos to trade for the heart of the defense, Eric Kendricks. The linebacker has been the man in the middle of Mike Zimmer’s defense since the 2015 draft. He annually leads the team in tackles and is one of the elite linebackers in coverage in the league.

General manager Kwesi Adofo-Mensah will get a second-round pick for Kendricks in that scenario. That’s good value for a 30-year-old. However, it would weaken the defense and wouldn’t fit Adofo-Mensah’s phrase ‘competitive rebuild,´ he has talked about all offseason.

The organization already drafted Brian Asamoah in the third round, and he might end up replacing the veteran in a few years, but he can’t replace Kendricks in the near future. The trade would result in a significant downgrade.

Vikings Should Be Buyers

Overall, the Vikings have a good mix of young players with potential and veterans who add excellent play combined with leadership. With some wiggle room in the cap, the Vikings could very well be a buyer in the trade market and improve the team to be even more competitive in 2022. The team could upgrade the receiving corps behind Jefferson, Thielen, and Osborn to give O´Connel enough weapons to build a scheme for a dangerous aerial attack.

Wharton suggests that the Jaguars should trade away third-year player Laviska Shenault for a fifth-round pick to the 49ers. However, the Vikings should enter the Shenault-sweepstakes.

The Jaguars selected the dynamic receiver for good reason in the second round just two years ago. He recorded over 1,200 yards and five touchdowns in a disastrous situation in Jacksonville. He’s a good player in the short passing game and could open up even more space for Justin Jefferson to run deep routes. Conversely, if the defense entirely focuses on Jefferson, Shenault has more room to operate in the screen game. He could be a perfect fit for O’Connell’s offense, and he’s definitely worth a day-three draft pick.

The Philadelphia Eagles desperately needed to draft a good receiver in 2020 and had the choice between Justin Jefferson and Jalen Reagor. Surprisingly, GM Howie Roseman took Reagor. Former Vikings general manager Rick Spielman was happy to come away with Jefferson, who went on to instantly become one of the best receivers in football. He is on a record-breaking pace early in his career. Reagor, meanwhile, recorded only 695 yards and three touchdowns in two seasons. At the end of his second season, he was used mainly as a special teamer, and the organization would be better without him and not be reminded of their mistake every week.

The costs of a late-round pick for a former first-round selection result in a low-cost high-reward scenario. If he can come close to the potential Roseman has seen in him, he could be an asset for the Vikings. None of the receivers on the roster are speed-demons, and Reagor would bring an interesting dynamic to the receiving corps.

Improving the team should always be an option for Adofo-Mensah. Reclamation projects and backups from other teams could become true reinforcements for the purple team in an attempt to make a playoff run happen in 2022.