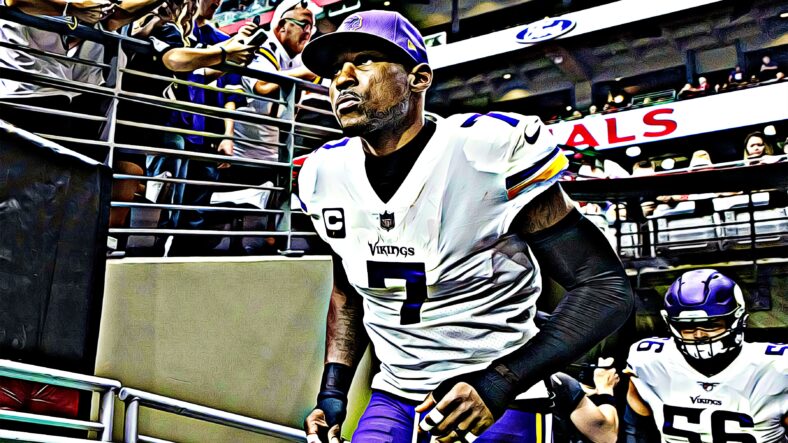 Don’t look now, but Minnesota Vikings cornerback Patrick Peterson is “towing the company line” for the franchise’s vision of the immediate future.

After two unsuccessful playoffs-less campaigns in 2020 and 2021, Vikings ownership cut ties with general manager Rick Spielman and head coach Mike Zimmer. As replacements, Kwesi Adofo-Mensah and Kevin O’Connell were hired to inject youth, enthusiasm, and collaboration into the culture.

Adofo-Mensah had a golden opportunity to torch the existing roster — if he saw fit — as the new-look everything could’ve effectuated trades of current Vikings players for a proverbial rebuild of the depth chart. Adofo-Mensah chose otherwise, retaining quarterback Kirk Cousins and most of the team’s veteran core.

One of those men is Patrick Peterson, a player who joined Minnesota in 2021 with Mike Zimmer as the luring factor. Zimmer was exalted for defensive wisdom, so Peterson wanted a piece of it.

But now, the Vikings leadership is banking on Zimmer as the culprit for 2021 woes. The team finished 8-9, squandered games defensively at ultra-crucial moments, and often fell victim to bland offensive playcalling. Because Adofo-Mensah and O’Connell kept the 2021 roster mostly intact, they’re counting on “their way of doing things” as superior to Zimmer and Spielman’s.

And Peterson tends to agree. On the first day of voluntary player workouts in Eagan, the Vikings cornerback opined, “I feel like we’ve got a good thing going, but we needed to be led in a new direction.”

That new direction is Kevin O’Connell — plain and simple. Peterson, Adofo-Mensah, the Wilfs, some fans, and other Vikings players believe the team was “this close” to fruition as a playoff team in 2021. After all, the Vikings tied the NFL record for games decided by eight points or fewer last year. Minnesota endured one blowout loss — coincidentally, the quarterback was out due to COVID — at Lambeau Field when the Packers smoked Sean Mannion’s Vikings on January 2nd.

So, this is the vision. O’Connell will do what Zimmer could not — foster the same group of men beyond a ho-hum 8-9 record. Preferably, the team won’t collapse at the end halves, nor will silly playcalling infiltrate critical offensive situations.