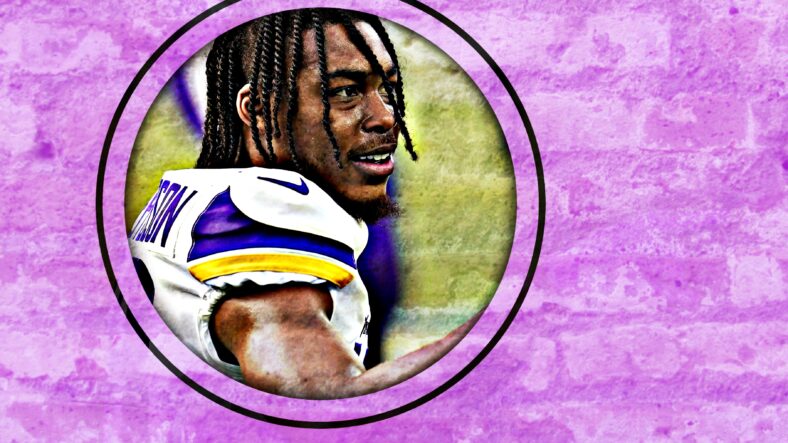 In the last four years, the Minnesota Vikings have talked players like Danielle Hunter, Eric Kendricks, and Stefon Diggs into relatively team-friendly deals. But that will not work for wide receiver Justin Jefferson — because he knows a payday is coming.

Jefferson, who set the NFL record for most receiving yards in a player’s first two seasons in 2020 and 2021, will command an otherworldly contract when his rookie deal expires after the 2024 season. And, per customary practice, those discussions generally heat up following the superstar’s third season.

On a calendar, that is spring of 2023 for Minnesota and Jefferson to explore extensions talks, assuming new general manager Kwesi Adofo-Mensah follows current unspoken protocol.

Chad Graff from The Athletic asked Jefferson on Tuesday if he’d taken notice of other wide receiver contracts lately. Unsurprisingly, Jefferson has done just that, replying to Graff, “I’m excited for them and excited for what I have in store.”

“In-store” for Jefferson is between $30-$35 million per season when the negotiations begin. You know, quarterback money from two years ago. This is the lay of the land as of April 2022 for wide receivers contracts, per average annual salary:

Beyond the shadow of a doubt, Jefferson will shatter these totals with a purple sledgehammer. The salary cap will continue to inflate — and Jefferson is just that damn good, at age 22, to surpass the monetary figures above.

So, his casual comment about the excitement over his next contract is a tapered, diplomatic confirmation that a gargantuan sack of money will hit his bank account in 2024.

The Vikings next task? Ensuring Jefferson wants to stay in Minnesota. Inconveniently, Jefferson arrived at the precise moment when Mike Zimmer’s defense died, disabling the Vikings from reaching the playoffs in Jefferson’s first two seasons — not a good look for a team hoping to retain a productive, hungry playmaker.

But the wins must follow. The NFL doesn’t have a supermax program like the NBA, leaving no incentive for Jefferson to stay with the Vikings if the team fails to reach the postseason in 2022 or 2023. Why on earth would Jefferson want to remain a Viking if the franchise goes 0-for-4 for playoff entry in his first four years? Hint: he wouldn’t.

Ergo, the Vikings have a vested interest to make the playoffs now. And that’s probably why the ownership and general manager scoffed at the idea of rebuilding.

Whether it’s the Vikings or another team, Jefferson will break the bank — soon.