Why Justin Jefferson Will Soon Be Extraordinarily Rich 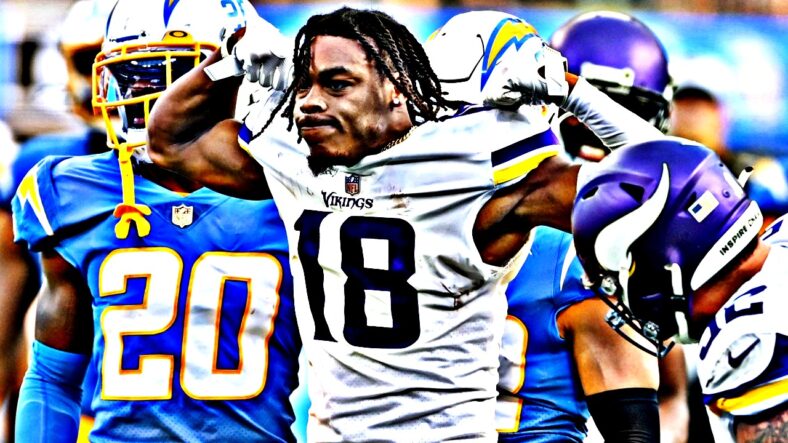 The Minnesota Vikings have three years remaining on Justin Jefferson’s rookie contract, and that provides a limited amount of solace. In theory, as is currently happening, the Vikings can surround Jefferson for three more seasons “on the cheap.” Think of a quarterback on a rookie contract — but with a star-studded wide receiver.

But after the 2024 season, the financial team-friendly honeymoon ends. If Jefferson were eligible for an extension today, he’d command about $27-$30 million per season. End of story, not debatable.

Why? Well, this. These are the receiving yards totals inside the last two seasons — when Jefferson entered the NFL.

Per yardage, Jefferson has produced the best start to an NFL career ever. Plain and simple. Ja’Marr Chase could surpass Jefferson in 2022 for a player’s first two seasons, but you get the point. Jefferson isn’t some DeVante Parker-type who’s a nice addition to an offense. He’s a game-changer, possessing abilities to rack up receiving yards and touchdowns like most men cannot.

A 22-year-old wide receiver has led the NFL in receiving yards over the last two seasons. Just let it sink in. Such heroism will absolutely command and demand top WR dollars on the open market. It’s just a matter of when.

For players on rookie deals, like Jefferson, who make it vividly obvious they’re special, contract extension talks generally begin and actionize after Year 3. Accordingly, the Vikings would chat with Jefferson about his gaudy new wallet in the spring of 2023 — or one year from now. Then, that money would “kick in” during the 2025 season.

This is the current state of play for wide receivers, per average annual salary:

Jefferson, by the time extension discussions commence, will bash these figures to smithereens. That’s what men who lead the NFL in receiving yards through sophomore campaigns do.

Too, the numbers above will inflate with the salary cap spike. Remember when your friends savaged Kirk Cousins for $28 million guaranteed per season? That’s a steal of a deal now for a passer accounting for 30+ touchdowns annually. In the same spirit, the deal Stefon Diggs signed on Wednesday ($26 million) will feel puny.

Next steps for this situation? The Vikings better reach the playoffs in 2022 or 2023. Otherwise, why the hell would Jefferson want to stay in Minnesota after multiple playoff-less campaigns? Some other team will blissfully cut the man a check for $35 million per year.