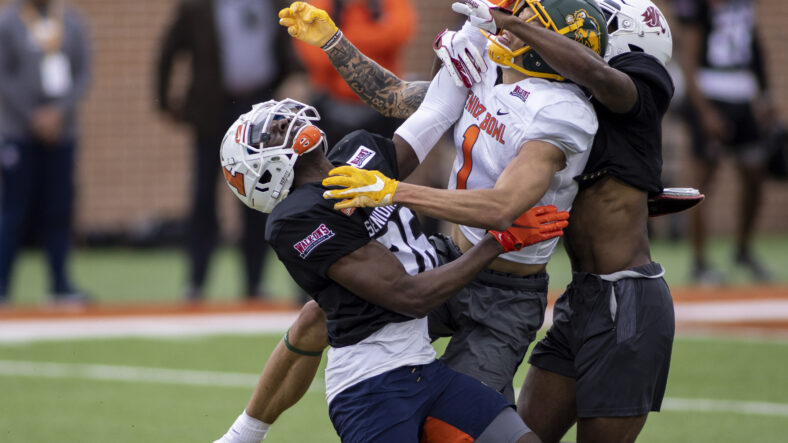 The exploding salaries of wide receivers in the NFL show one thing: Teams value wide receivers. Teams pay a lot to have a true number one wideout on the field to help their quarterback. Even number two receivers were paid a small fortune in the recent free agency.

Rookie contracts of pass catchers will become similar to the passer’s rookie deals. Teams need to capitalize before overpaying for the two positions. Therefore, receivers will get drafted higher and higher. In the last two drafts, 23 receivers were selected in the first two rounds.

Not only the big school names like Alabama and Ohio State will have players at the position drafted highly in this month’s draft. There is a small-school wide receiver who is rising on draft boards recently. He is one of the most exciting prospects to watch on tape and has some electrifying athletic tools.

Christian Watson was a redshirt senior at North Dakota State University and will turn 23 in May. As a result of his long college career, he will be one of the older players in the draft. However, Watson does not lack the potential to be a great wide receiver.

Watson was born and raised in Florida. He attended Henry B. Plant High School in Tampa and caught 23 passes for 393 yards and eight touchdowns as a senior, which are not the mind-blowing numbers you would expect from a potential first-round pick.

The two-star athlete was ranked as the 3689th best player in his recruiting class, the 501st wide receiver, and the 536th best player in Florida. Unsurprisingly, Watson did not generate much interest in recruiting. His only offer came from North Dakota State, and he took it.

Watson redshirted his true freshman season. In his first season seeing the field, the redshirt freshman caught nine passes for 165 yards. In the following campaign, Watson had a breakout year. He finished with 34 receptions for 732 yards and six touchdowns.

His numbers declined in the shortened pandemic season in 2020. His stats got better again and were almost similar in his sophomore and senior year. Overall, the athlete finished his college career with 105 catches for 2,140 yards and 14 touchdowns. Low numbers for a highly touted draft pick, but impressive for an NDSU receiver.

Despite having a successful college career, Watson was almost snubbed from the Senior Bowl. After patiently waiting, he finally received an invite. Once the week of practice started, the small-school guy stole the show of the bigger-name players. In almost every article and report about the event’s winners, Watson was at the top.

The Senior Bowl was not the only event he dominated in advance of the draft. He stole the show again at the NFL Scouting Combine. He was measured at 6 ft 4 ⅛ inches — the same size as Hall of Famer Randy Moss, while weighing 14 pounds heavier than Moss.

Randy Moss did not attend the NFL combine, and his test results, especially the 40-yard dash, were hand-timed and therefore aren’t very reliable. The numbers vary from 4.2 to 4.4. For what it’s worth, Christian Watson ran a 4.36 40-yard dash at the combine. That’s 92nd percentile among wideouts.

40-yard dashes aren’t always accurate because players can practice for the event, and some work harder than others. But if the broad and vertical jump numbers look equally impressive, scouts can be sure that the sprint time was not a fluke.

However, Watson’s broad jump was one of the best in combine history, over 99th percentile and his vertical jump was better than 90% of wide receivers. Additionally, his play on tape looks just as fast. So scouts can be sure about his close-to-super-human athletic abilities.

Obviously, his athletic ability is at the top of the list. It shows on tape and is impressive to watch. For a player of his size and straight-line speed, he has good agility, which will help him to get open in the NFL. His route-running looks good, too, and he knows when and how to use his speed and when to slow down to fully exploit the weaknesses of zone coverage.

Watson shows versatility on tape. He can run a dangerous go or post route, but the explosive prospect can be used in screens as well. In addition to that, he can take a jet sweep to the house. He’s a threat at any time, and the defenses have to account for him on every play.

The biggest concern in his play is the number of drops, mostly concentration drops. He can catch the football but is too inconsistent at it. However, Watson is showing improvement. In the 2021 season, Watson posted a still less-than-ideal 10% drop rate after recording an abysmal rate of 28% in 2020.

Another big difference to the Vikings’ legend Moss is his problems with deep passes. He struggles to track the ball and make the catch. To fully utilize his ability as a deep threat, he has to improve in that regard. He did not play against high-level competition.

While Alabama receivers went up against cornerbacks like Kaiir Elam and Derek Stingley Jr., Watson played against the cornerbacks of Valparaiso and Basketball Hall of Famer Larry Bird’s alma mater, Indiana State.

Watson is currently expected to go late in the first round. He would be considered a reach at 12 overall, where the Vikings pick, but there’s certainly a chance that they value his physical tools and want to get him.

Another scenario includes a trade. Kwesi Adofo-Mensah could trade his first-round pick to draft later in the first round while acquiring extra picks. Alternatively, he could use his second-round pick to move up to get the electric North Dakota State phenom. Watson has the fifth-lowest odds among wide receivers to be the first receiver off the board, which means he will probably not fall to pick 46, the Vikings’ second-round draft position.

Watson could need some time to get used to the speed in the NFL because of the lack of high-level competition in his college career. But he certainly has all the tools to become one of the best receivers in football, and he would be a great addition to the Vikings’ offense. In the short-term, first-year Head Coach Kevin O’Connell could use him as a deep threat. Watson could be the long-term counterpart of superstar receiver Justin Jefferson and replace Adam Thielen.