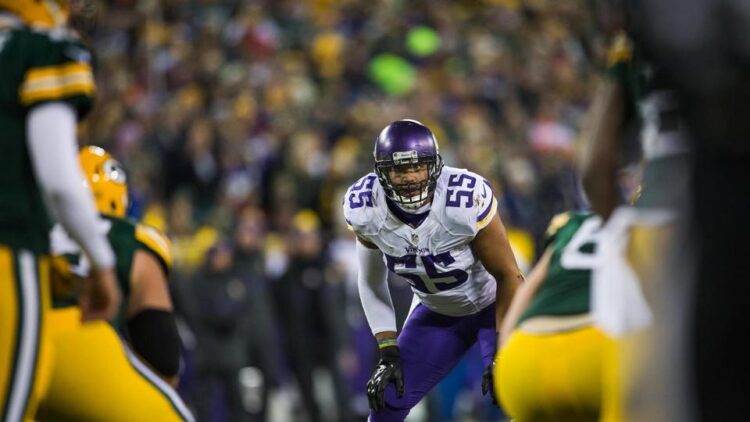 Green Bay has not beaten Minnesota in nearly 1000 days. In order for the Vikings to reach that milestone, they are going to change up their game plan from last week, switching back to a pass-dominated playstyle instead of running the ball repeatedly. Let’s look at some of the players who will be critical in achieving a win today:

Adam Thielen & Stefon Diggs, WRs: In 17 career games against the Packers the dynamic duo has totaled 10 touchdowns and 1,242 receiving yards. Thielen and Diggs each had outstanding years last season, as they both accrued over 100 catches, 1000 receiving yards, and 9 receiving touchdowns apiece. Arguably the best receiving pair in the NFL, their hands will be critical to beating Green Bay today, especially after losing newly-acquired wideout Josh Doctson to a hamstring injury that has placed him on IR.

Anthony Barr, LB: No one will ever forget Barr’s huge hit on Aaron Rodgers back in 2017 that broke his collarbone and sidelined him for a large part of the season. That hit singlehandedly put the Vikings-Packers rivalry into overdrive. The air seems to get thin every time number 55 sets foot on the field against the Cheeseheads now, as fans watch with anticipation (or fear) to see what Barr will do against the green and gold offense. The strange thing is, in his 10 games against the Packers Barr has only one sack and five QB hits. He’s never been super adept at taking down opposing play-callers. That may change today as Barr is fresh off a win with a sack on Matt Ryan and six solo tackles.

Harrison Smith, S: If you watched just five plays of Minnesota’s defense last week, you know how dangerous The Hitman is. Smith is without a doubt the heart and soul of the secondary, evidenced by both his ability to shut opponents down as well as his durability. The Tennessee native played 98.5% of defensive snaps last season, well above the next-highest player at 84% (Danielle Hunter). He was also second in tackles for the team at 84. In 100 career games, Smith has 20 interceptions, 12 sacks, and nearly 600 tackles. By all definitions, Smith is an elite player and will leave Rodgers completely hopeless today.

Aaron Rodgers- Rodgers is of course one the biggest names in hte NFL today, so it should be an obvious choice to put him here. However, fans should be watching for a different reason this year. Only one week into the season, the Packers quarterback has already been slightly at odds with new head coach Matt LaFleur about his ability to call plays at the line. Rodgers also isn’t the player he once was and today might be the day that the Vikings prove that he is in fact human. Look for the Vikings to dial up the blitz and get to the signal caller multiple times early in this game.

Jaire Alexander- Alexander famously went on record as saying “They weren’t that tough. We just didn’t make enough plays” after being shredded by Vikings receivers when Green Bay visited Minnesota last year. Of course, Alexander is a good player, but he’ll need to be much better if the Packers plan on putting him one-on-one against either Thielen or Diggs. If he gets safety help, and if Green Bay gets to Cousins he could have a huge day. With a full season under his belt, the Vikings will have to watch out for Alexander today.

Blake Martinez- Probably the best player on the Packers defense, Martinez is a great player in line with former Packers AJ Hawk and Clay Matthews. Martinez has an extremely high motor and plays smart. With a good defensive line in front of him, Martinez could clean up a lot of plays today if the Vikings can’t get blockers to the second level to free up Dalvin Cook. Martinez also can cause havoc for the Vikings line and Kirk Cousins. Look him to try to stunt on the Vikings interior lineman and especially rookie center Garrett Bradbury who will have his hands and mind full to keep track of the Packers linebacker.

Trae Waynes vs. Marquez Valdes-Scantling- This may be the most important matchup of the day. If the Vikings want to win Waynes has to have a big day and shut down the Packers 3rd option. Valdes- Scantling is bigger and faster than Waynes and could potentially cause some issues that will force the Vikings defense to adjust.

Vikings Safeties vs. Jimmy Graham- Jimmy Graham will most likely see coverage from all three of the Vikings safeties on Sunday, all of which are just big enough and fast enough to keep up with him. Graham seems to be the best option the Packers have besides Davante Adams, so taking him away would severely limit his throwing options.

J.K Scott vs Vikings Special teams- Aaron Rodgers does not turn the ball over. The Vikings are going to facing long fields almost every time the get possession of the football. To take away some of the pressure of driving seventy to eight yards, the Vikings punt returners are going to have to find space to run. Last week they were able to block a punt, but was not able to do much with punt returns. They are gonna need a much larger contribution to shorten the fields for the offense.

The Vikings are facing the Green Bay Packers Sunday for the first time in franchise history. The Packers, an expansion team from the 2019/20 off-season, aren’t very important in general terms or especially in regard to any sort of rivalry between the two teams from the frozen North. Of course, I’m trying to be funny, as there is no more important rivalry for Vikings fans than that of the Packers and while some Packers fans (mostly from the Milwaukee area) will attempt to say that the Packers/Bears rivalry is more heated and important, recent years have proven otherwise. Although the Packers/Bears rivalry is very heated in and of itself, as well as much older than the Vikings/Packers rivalry. But the checkmate in that argument is and always will be two words, Brett Favre.
Anywhom, the Vikings will face the Packers in Lambeau Sunday for the 116th time during the regular season, at least according to Pro-Football-Reference.com.

The Packers lead the all-time series, 60-54-3 (that includes the playoffs), and in the regular season. Although that was followed up by the following series breakdown; “53-59-3 regular season, 1-1 postseason”, which… Perhaps it’s been a long week but that doesn’t make a whole lot of sense to me. Both add up to 117 games played, but beyond that, is either some sort of proclamation from the future or a typo on PFR.com’s part (either that or I’m just not as smart as my Mom angrily tells me I am).

So, let’s move on from that.

The remaining statistics are pulled from the summation done by DailyNorseman.com’s Christopher Gates (https://www.dailynorseman.com/2019/9/14/20866170/brief-look-minnesota-vikings-green-bay-packers-history):

Total regular season games between the Vikings and the Packers: 115

The more important stats are the more recent ones, although that doesn’t really tell you much either considering how different NFL teams can be year-to-year. However, since that’s the goal of this section I’ll stop belittling it and point out whatever we need as Vikings fans to feel even more confident going into Lambeau Week 2. In the past seven match-ups between the Vikes and Pack, the Vikings have won FIVE, lost ONE and tied once. That’s astounding for a team that for whatever reason (in the Packers) that gets picked to represent the NFC in the Super Bowl nearly every season.
Now, you can read my thoughts on that bias and whether or not the Vikings (or NFL as a whole) should fear the Packers like it’s 2013, HERE (https://purpleptsd.com/despite-the-hype-the-vikings-have-nothing-to-fear-in-aaron-rodgers-the-packers/). But after the rough start that was the win in Chicago last Thursday, the Packers don’t look like they’re firing on A cylinder, let alone all cylinders. So, click HERE (link TBD) to see the Vikings/Packers score prediction round-table that we recently published, otherwise join us in our live chat around 11 a.m. Sunday to watch the Purple hopefully dismantle the Packers at noon!

Vikings vs Packers: A Gambler’s Guide

Vikes at Pack Game Preview: Time to Settle That Tie

Vikings’ Battle For The North Begins In Lambeau

Vikings’ Zimmer vs. Packers’ LaFleur: A Study In Contrasts