Vikings’ Zimmer vs. Packers’ LaFleur: A Study In Contrasts 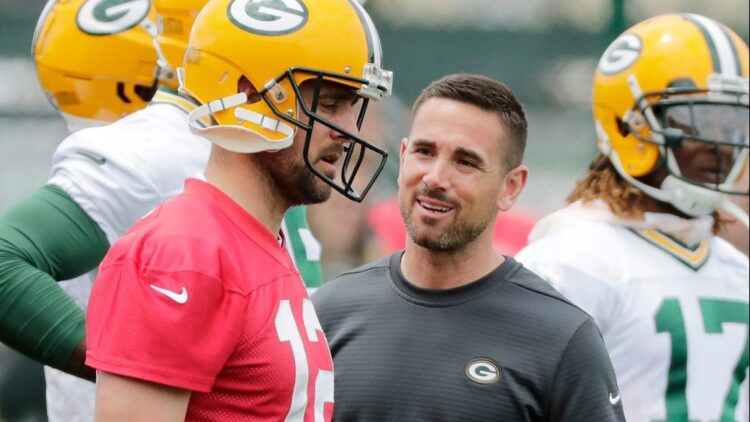 On Sunday, the Minnesota Vikings and their veteran coach Mike Zimmer will travel to Green Bay to take on the Packers and their new head man, Matt LaFleur.

Anyone that knows the NFL well learns to realize that you have to take week one with a grain of salt.

Sometimes you should give it a salt bath.

In the case of the contest scheduled on Sunday afternoon between the Minnesota Vikings and the Green Bay Packers, it’s probably somewhere in-between.

To date in the young 2019 NFL season, the Green Bay Packers are the 29th ranked offense and number one in ranked defense in the league after their win in Soldier Field against the Chicago Bears.

Those rankings will change after Sunday’s game against Minnesota, but not as one might assume automatically by watching the Packers for the last decade.

In fact, it is the opinion of this one person, at this one desk, that the Green Bay Packers’ offense is in big trouble this year, while it’s defense has already convinced of a significant improvement.

Why the gloomy prognosis? Aren’t we throwing away week one?

Yes and no.  But we’ve got to dive deeper into it than that.

After firing Mike McCarthy last year, their head coach of 13 seasons, the executive arm of the Packers decided to employee the 39 year-old offensive coordinator for the Tennessee Titans name Matt LaFleur.

Who is LaFleur?  Anything like his counterpart on Sunday in Mike Zimmer?

No.  Not really.  In fact, absolutely nothing like Zimmer.

Matt LaFleur has been an NFL offensive coordinator for two seasons.  The first of which was in Los Angeles under head coach Sean McVay (who wrote the Rams’ playbook and called the Rams’ plays), and the second was in Tennessee, where LaFleur managed to drop the Titans’ offense from the 19th NFL rank in 2017 to the 27th spot in 2018–just before getting the call to lead one of the NFL’s oldest and most storied franchises.

Obviously, there must have been something in LaFleur’s pedigree or resume that warranted such a grand ascension?  A national championship? A total revamp of an NFL offense?

No and no.  Not even close.  In the seven seasons prior to being Sean McVay’s “offensive coordinator” in title only, LaFleur was the QB coach in Washington, Houston, and at Notre Dame.

Before that he spent two seasons as the Texans’ “quality control” assistant.

So how does a guy like LaFleur that get a job like this–leading the immortal Green Bay Packers in the battle on Sunday?

Once again, it takes no savvy detective to understand that besides Sean McVay’s enthusiastic reference, this was all about Mr. Aaron Rodgers.

Somehow, the Packers sorely disappointing 6-9-1 2018 season was clearly due to the lack of competence in the head coach.  One simple change at the top would straighten the ship.

Yes–and it would be nice if you bumped up the quarterbacks’ salary (to $33.5M) and spent a hundred fifty-four million dollars on new contracts for defensive players.

Such as the way the 2019 Packers have been built moving forward.

Matt LaFleur, with the redolence of McVay upon him, is essentially a young quarterbacks coach sent to Green Bay to smooth the feathers of the Grand Aaron with the promise of a fireworks playbook and smooth transition.

And with zero reps for Rodgers and most of the Packers in the exhibition schedule, LaFleur skipped the ‘old school’ idea of preseason for the new, keeping his playbook tight to his vest.

In their Chicago debut, the Green Bay offense had:

In the Packers’ locker room after their 10-3 win, Rodgers gave a game ball to LaFleur, amidst the hearty cheers of his Green Bay teammates.

Longer In The Tooth

On the other sideline for Sunday’s matchup, a ruddy Mike Zimmer strokes the gray stubble on his chin.

His team signed no big free agents this year, worked hard to keep one of their own, and carefully designed a return to the kind of football old guys like him love to see on Sunday.

Not the quarterback friendly “aerial displays” that Sean McVay runs all over the league (until they run into fortified defensive minds like Bill Belichick’s), but instead calculated game plans that push a team game against talented opponents.

Run the ball, stop the run, pressure the quarterback.  Know your job, stay on the same page, play together.

It’s not easy.  It takes a lot of experience to execute not only the simple principles, but the aspects of the game that manifest complex results out of them.

The clash of experience and opportunity between Zimmer and LaFleur couldn’t be clearer.

One is a true journeyman with a resume of unit and team building that has suffered success and scar alike, the other at this point a reflection of another coach’s ideas and one quarterback’s political influence.