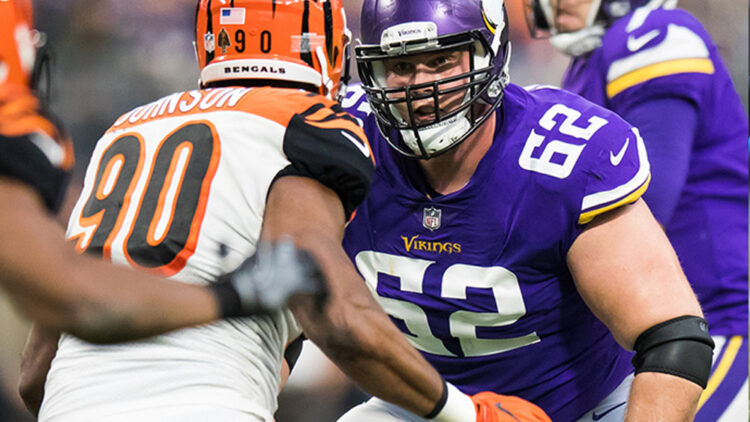 Offensive lineman Nick Easton will sign his second-round tender. According to Jason La Canfora of CBS Sports, Easton will sign the offer and report to Minnesota’s offseason workout program Monday. The Vikings placed the tender on Easton in March. He will earn $2.914 million in 2018.

Nick Easton will sign his 2.91 mil 2nd rd tender this morning and report for Vikings off season

A restricted free agent after the 2017 season, the Vikings placed the second-round tender on Easton and retained the right to match any contract offered by another team. A new team would have had to forfeit a second-round pick to land the versatile lineman. Minnesota did not retain its other two restricted free agents, offensive lineman Jeremiah Sirles and running back Bishop Sankey.

The 25 year-old was originally signed by the Baltimore Ravens as an undrafted free agent in 2015. Easton was then traded to the San Francisco 49ers for a conditional seventh-round pick. Shortly thereafter he was acquired by the Vikings in a trade with the 49ers. In the trade, Gerald Hodges was sent to San Francisco in exchange for Easton and a 6th-round pick.

Easton, a Harvard graduate, made his first career start in place of Joe Berger in Week 13 of the 2016 season. He remained a starter for the rest of the year.

Before the 2017 season Easton was moved to LG after Alex Boone was cut. He started 12 games, 11 at left guard and one at center. He was flagged for seven penalties and received a Pro Football Focus grade (of 41.5), but he played well overall, allowing zero sacks in the time he played.

His season was cut short due to a broken ankle suffered in Week 16 at Green Bay. Despite the injury, he’s expected to be ready for spring drills, which commence today.

With the re-signing of Easton, the Vikings will return four of five starters on the offensive line. Left tackle Riley Reiff, Easton, center Pat Elflein, and right tackle Mike Remmers are now under contract. Right guard Joe Berger retired from the NFL this offseason.