The 2017 Pro Football Focus Grades of Every Minnesota Viking 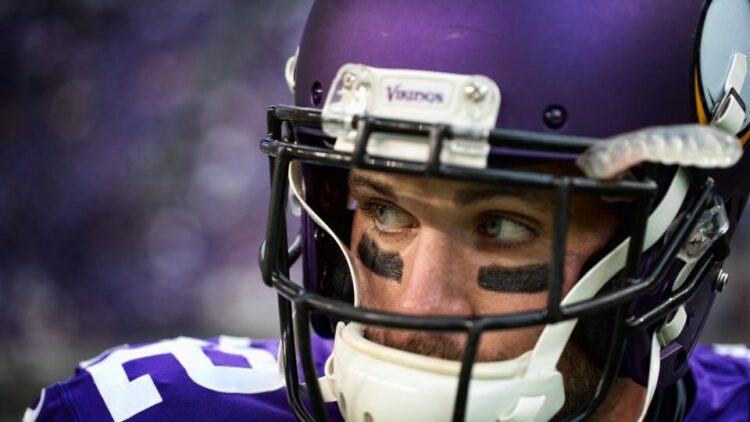 Before we get started I would like to make some things clear about PFF grades.

Pro Football Focus (PFF) has been grading NFL players since 2004. The football analytics site evaluates individual performances on a play-by-play basis. On every play of every game, a PFF analyst will grade each player on a scale of -2 to +2 according to what he did on the play.

The grading method was designed to build a clearer picture of how players performed, rather than simply judging performances based on box-score stats. Stats can be misleading.

While most statistical analysis is quantitative in nature, PFF uses qualitative measures and opinion-based grading as the basis of their rankings, so like baseball umpires, their calls could be construed by critics as “biased.” However, the grading process is overseen by at least three individuals per contest, so while the numbers may not always be perfect, the process itself is rather reliable.

What’s also unique about PFF is that season-level grades also account for the duration of good and bad play, resulting in “compounded” grades (both positive and negative) if the player’s performance continues for long periods of time. Basically, the grades factor in “streaky” play. Kinda cool, right?

Anyways…I hope that helped. It’s better to know these things beforehand because some grades may surprise you.

So without further adieu, here are the 2017 season grades for each qualified Viking. The players are arranged by grade within their position group. Notable position rankings are listed in parentheses.

Pro Football Focus ranked Keenum as a top-10 quarterback — unlike NFL.com. Not only did Keenum have the second-highest QBR in the NFL behind Carson Wentz, he was the league’s most accurate red zone passer of 2017.

Case Keenum did not throw a single turnover-worthy pass in the red zone this past season. He was also the NFL's most accurate passer in the red zone, hitting the mark on 76.9% of his throws. #Vikings #SKOL pic.twitter.com/A8kP3InG6N

[quote_box_center]“Keenum’s incredible run this season with the Vikings extended all the way into the red zone this season. He threw the highest percentage of catchable passes of any starter in that area (76.9 percent) and didn’t have a single turnover-worthy throw. That’s more than just game managing.”[/quote_box_center]

Bradford started two games and had quite possibly the two most polarizing starts in the history of football. Although he only played three halve,s he ended the season with a 2-0 record thanks to Keenum’s comeback performance in Chicago.

Bridgewater appeared in only one game, throwing two incompletions, including an interception. He had negative three rushing yards on the season.

Dalvin Cook played in only four games this season before suffering a season-ending ACL injury. In his absence, Murray and McKinnon filled the void, earning solid marks in expected categories but exceeding expectations nonetheless. McKinnon excelled in the passing game and Murray shined running the ball down the stretch, finishing the season with eight rushing touchdowns.

C.J. Ham received a seemingly low grade but still ranked in the top-10 for fullbacks. It was a respectable mark for his first year at the position.

According to Matthew Coller of ESPN 1500, Thielen had a 83.1 PFF grade in 2016, which ranked in the top 20 wide receivers. The Vikings’ first 1,000-yard wideout since Sidney Rice in 2009 proved he’s no 1-year wonder. Thielen and Diggs were PFF’s top-graded receiving duo in the NFL.

Diggs finished the season with 64 catches for 849 yards and eight touchdowns in 14 games. Diggs has been able to showcase his talents when healthy, and health has been the only detriment to his game aside from the occasional drop. He caught 200 passes faster than any other Vikings player in history.

Instead of the Vikings using one player as their third option at receiver, the offense relied on a trio of players. Jarius Wright earned 13 first downs, two touchdowns and 198 yards on 18 catches, Michael Floyd had 10 catches for 78 yards and Laquon Treadwell led all three with 20 catches for 200 yards.

Morgan is the surprise performer at tight end. His run blocking grades ranked fourth-highest among the position, leading to his top-ten grade. Although he only received 12 targets all season in the passing game, he hauled in ten catches for 95 yards and a touchdown.

Rudolph didn’t grade as high as Morgan because his run blocking wasn’t as strong. He did, however, have a great year as a receiver. Rudolph hauled in 57 catches for 532 yards and eight touchdowns.

Seeing how low both Riley Reiff and Pat Elflein graded was a surprise. Both players certainly appeared to perform much better than their rankings suggest.

One reason the PFF grades are so low could be something we talked about earlier — consistency. At the beginning of the season, both players did not allow a sack for quite some time, which their grades at the time reflected. But as the season went on, the performances of both players regressed, as did the grades.

According to FoxSports.com, Reiff and Elflein each allowed four sacks on the season. Reiff committed four penalties for 35 yards while Elflein committed one penalty for five yards.

Another reason for the low grades was provided by Coller: “For starters, the Vikings faced a murderer’s row of defensive tackles this season,” he wrote. “They matched up with DTs that ranked 1, 2, 3, 8, 9, 13, 14, 15, 16, 17, 19. That’s crazy-hard competition for a even the best of the best,” he continued. “The Vikings also asked a lot of their linemen. They ran the second highest percentage of play-action passes and a high percentage of screens. Case Keenum also held the ball for the seventh most time of any quarterback.”

Despite the low-to-average player grades, the offensive line was still the Vikings’ most-improved unit of 2017. The group provided Keenum with adequate time in pass protection and the team’s ground game was greatly improved. A year after finishing with the league’s worst rushing attack, the Vikings ranked seventh in rushing yards in 2017.

A quick look at the grades reveals that the Vikings could use an upgrade at guard if Berger decides to retire after the season.

Joseph was the 12th-ranked defensive tackle during the regular season. If it weren’t for nose tackles and 3-techniques being paired together under PFF’s “interior defender” category, Joseph would be a top-3 nose tackle. His ability to stop the run is elite, but he can also disrupt the pass. Joseph is one of the most underrated defensive players in the NFL.

33 year-old Tom Johnson held his own at 3-technique this season. His PFF grade has improved each of the past three seasons (48.0 in 2015 to 72.7 in 2016 to 78.9 in 2017) while Shamar Stephen proved this year he deserves more playing time. According to Football Outsiders, Stephen played 38.5% of the Vikings’ defensive snaps. Rookie Jaleel Johnson showed promise in limited snaps. Both Tom Johnson and Stephen will be free agents after the season.

Everson Griffen finished the season with 13 sacks, tying for fourth in the NFL. Griffen’s best season as a pro earned the 10th-best grade out of 108 edge defenders. Danielle Hunter had seven sacks and Brian Robison, while playing 56.4% of the defensive snaps, had four. No real big surprises with grading here.

Barr’s rebound season was reflected by his grade. He stuffed eight runs behind the line of scrimmage, defended six passes, and was a menace against opposing quarterbacks (wink wink), but his grade would have been even higher had he registered more than one sack and zero interceptions.

Kendricks’ grade was lowered by some missed tackles early on in the season, but he continues to fly under the radar as a standout pass-defending linebacker.

Because of the above average performance from the Vikings linebackers this season, Minnesota ranked No. 2 in the NFL in covering opposing tight ends and No. 1 in opposing running backs receiving yards, according to Coller.

Rhodes is considered one of the best cornerbacks in the NFL. His grade is a good reminder that PFF does not grade talent, only performance on the field.

The 39 year-old Newman continued to amaze with his stellar play in 2017. According to Football Outsiders, the Ageless Wonder played 56.1% of the Vikings’ defensive snaps while fellow cornerback Mackensie Alexander played 32.4% of snaps.

In 2017, the “Hitman” set the PFF record for the highest grade ever given to a safety. He also earned the highest grade handed out to any player at any position this season. He deserves to be in the running for NFL Player of the Year.

Sendejo had another solid season. He proved once again the Vikings made the right decision to pair him alongside Smith. Pretty solid seasons for the ‘backup” safeties as well. Anthony Harris shined when he filled in for Sendejo, and both Harris and Jayson Kearse excelled on special teams.