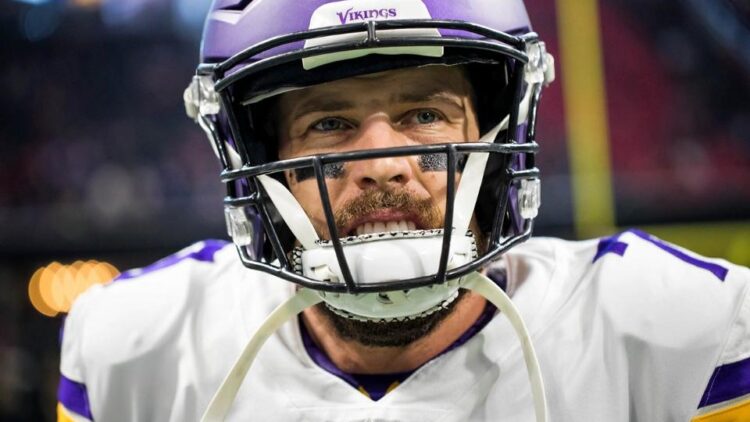 Gregg Rosenthal of NFL.com posted his year-end quarterback rankings Thursday. In a bit of a head-scratching move, Rosenthal ranked Green Bay Packers quarterback Aaron Rodgers ahead of Minnesota Vikings quarterback Case Keenum. Rodgers was rated as the No. 11 quarterback and Keenum was slotted in at No. 14.

The 11-13 selections were labeled as the “Brilliant and Breif” category. The trio included Rodgers, Jimmy Garappolo, and Deshaun Watson, in that order. All were rated higher than Keenum, who helped lead the Vikings to a NFC North Championship, a No. 2 seed in the NFC, and a 13-3 regular season record.

Keenum had an 11-3 record as a starter and threw 22 touchdowns and only seven interception in 15 games played. According to Seth Walder of ESPN Keenum had the second-highest QBR among all NFL quarterbacks in 2017 (69.8). Only Carson Wentz of the Philadelphia Eagles had a higher rating (75.8). Keenum even surpassed Tom Brady of the Patriots, who was third with a QBR of 67.4.

The regular season stats of the signal callers are in Rosenthal’s QB Index. He wrote the following for each selection:

“I struggled with how to rank these three shooting stars of the 2017 season. Rodgers would be second in my per-game grading average and Jimmy GQ would be in the top-five, but they only played a third of the season and don’t deserve to be ahead of top-10 quarterbacks who stayed healthy.”

Garoppolo once compared himself to Rodgers, a correlation that makes more sense after watching the 26-year-old rifle the ball quickly from odd angles during his supernova stretch of starts with the 49ers. The presence of coach Kyle Shanahan should ensure Garoppolo’s fast start transfers to lasting success.

Watson’s stretch of healthy games was like a five-hour energy shot to the 2017 NFL season that wore off too soon, leaving America with a rotten stomach and Tom Savage. The 2018 season will be a lot more fun if we get a full season from this trio.

The advanced metrics (PFF, DYAR, QBR) all have Keenum in the top-seven quarterbacks, so it’s quite possible I’m underrating him. He graded slightly lower here because of how much the Vikings‘ sensational play-calling and receiver play helped out, in addition to an inordinate amount of dropped potential interceptions. Keenum’s ability to keep plays alive before finding receivers late in the down was a surprising joy to watch all season.
2017 stats: 15 games | 67.6 pct | 3,547 pass yds | 7.4 ypa | 22 pass TD | 7 INT | 160 rush yds | 1 rush TD

Grading Keenum lower because “receiver play helped out” and because of “an inordinate amount of dropped potential interceptions” is a stretch. Sure there were some drops, but remember the Carolina game? The receiver play did anything but help Keenum’s numbers, and it actually caused an interception. “Sensational play-calling” is a bit of a reach as well, and could be said of any good QB play.

Keenum ranked ahead of quarterbacks Jared Goff (15) and Cam Newton (16) which I find puzzling as well. Be that as it may, he had one fewer touchdown and one fewer interception than New Orleans Saints quarterback Drew Brees, who No. 4 on the list. Keenum threw two more touchdowns than Atlanta Falcons quarterback Matt Ryan, who came in at No. 9. Keenum may not have thrown for 4,000 yards but he didn’t start 16 games either.

Keenum was snubbed on this list. I would like a better explanation of why the three “Brilliant and Breif” quarterbacks are rated so high. Sure, when they played they played well, but they didn’t have much of an impact on their team’s season. Like Rosenthal said himself, they only played in a third of the games.

The intro of the article states that Rodgers, Garappolo and Watson all finished in the top ten of Rosenthal’s per-game grading average. That’s likely true, but extrapolating their season stats isn’t the same as actually doing it.

The Vikings earned the No. 2 seed in the NFC with Keenum at the helm, and for that fact alone I think he deserves to be rated higher than 14th.

This could be a simple case of Rosenthal not thinking very highly of Vikings quarterbacks. In 15 games last season, Sam Bradford threw for 20 touchdowns and five interceptions (he was pretty accurate, too). Bradford finished 20th in Rosenthal’s 2016 rankings.

Rodgers had a 4-3 record as a starter in 2017. Garappolo was 5-0 leading the San Francisco 49ers but only threw for seven touchdowns versus five interceptions. Watson had great numbers but was 3-3 as a starter before he tore his ACL.

Is Keenum a better quarterback than Rodgers, Garappolo and Watson? No, I don’t believe he is — but he clearly had a better season. The article states: “This is the Quarterback Index. For one final time this season, we ranked every team’s primary starter based on 2017 performance alone.”

Based on 2017 performances alone, I question ranking Rodgers, Garappolo and Watson higher than Keenum.