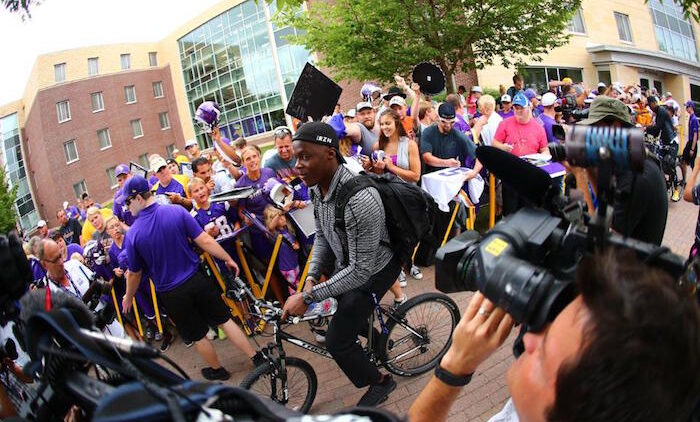 Football is back in Minnesota! Well, sort of.

Players made their way into the Vikings training camp facilities today at Minnesota State University, Mankato. Plenty of buzz was in the air as Minnesota prepares to repeat as NFC North division title holders in 2016.

Rookie wide receiver, and Minnesota’s top 2016 draft pick, Laquon Treadwell was the very first player to arrive at camp today. The young receiver is doing his best to get on head coach Mike Zimmer’s good side already as he arrived at the facilities a half hour early.

Minnesota defensive lineman Shariff Floyd was the next notable player to arrive at camp. Floyd has battled injuries throughout his young career, but that did not prevent the Vikings from picking up the lineman’s fifth-year option for 2017.

.@sharriffloyd catering to the masses at #Vikings training camp. pic.twitter.com/MEznkLOAiI

Floyd has also come to Mankato with a different “look” in his eyes than of year’s past.

Sharrif Floyd showed up with some new orange contacts to reduce glare/protect eyes. Says he wanted red ones but was given orange.

Linebacker Anthony Barr is looking make his name known around the entire NFL this season after showing flashes of greatness during his first two seasons in Minnesota. Due to a few injuries, Barr has yet to play a full 16-game season with the Vikings.

Lot of this happening today. Anthony Barr signing for fans as the Vikings report to Mankato for training camp. pic.twitter.com/XlyoDVNfQA

Kicker Blair Walsh comes to Mankato this year with many questions surrounding his future with the team. After missing a short, potential game-winning field goal against the Seattle Seahawks in the 2015 playoffs, Walsh is out to prove he is going to be the kicker in Minnesota for the long run.

Hometown hero, wide receiver Adam Thielen showed up to his old stomping grounds in Mankato today to prepare for his third season with the Vikings. Thielen has made most of his impact on Minnesota’s special teams unit in his two years with the team, but perhaps a bigger role on the offense could be in his future for 2016?

Biggest cheer so far has been for @athielen19 aka Mr. Mankato. #Vikings pic.twitter.com/cLloO3tE1s

Vikings defensive tackle Linval Joseph had a monster season in 2015. When he arrived to training camp today, he came equipped with something fun to help him explore the city of Mankato.

Big Goon will be riding in style at #VikingsCamp ? pic.twitter.com/tCOumcapR1

After an impressive rookie season in 2015, Minnesota linebacker Eric Kendricks is hoping to have an even better season in 2016. Apparently, his current salary does not seem to allow him to be able to afford a suitcase for camp though.

The Vikings are expecting big things out of new offensive lineman Alex Boone for this season. Boone arrived today for his very first training camp in the state of Minnesota.

Alex Boone interacting with fans during his first time at #VikingsTrainingCamp pic.twitter.com/CIpIUQIoco

Safety Harrison Smith made himself a ton of money with a new contract this summer, but the Vikings defensive leader opted to take the rookie bus to Mankato today. More money can sometimes change players for the worst in the NFL, but that does not seem to be the case with Smith.

Younger players and rookies who opt to can take bus to Mankato, this year @HarriSmith22 joined them! #vikings pic.twitter.com/WSxkGWzy11

Is there any player on the current Minnesota roster that has more pressure on them heading into the season than offensive tackle Matt Kalil? The Vikings hope that the signing of Boone this offseason will also have a positive impact on Kalil’s play for 2016.

For the past two years, Minnesota has been hoping for wide receiver Cordarrelle Patterson to regain the “flash” he showed in the 2013 season. Will this finally be the year that Patterson becomes a legitimate receiving threat in the team’s offense?

Most underrated defensive end in the league? Many who watch the Vikings closely believe that to be true about Everson Griffen. With Houston Texans defensive lineman J.J. Watt scheduled to miss some time due to a back injury. do not be surprised to see Griffen’s name at the top of the league’s sack chart when the season is all said and done.

Veteran linebacker Chad Greenway arrived to camp today with an interesting shirt. The long time Viking could be playing his final NFL season in 2016.

Minnesota quarterback Teddy Bridgewater and his favorite 2015 target in wide receiver Stefan Diggs showed up to training camp today together. The duo looks to improve upon their numbers from a season ago when they connected for 52 passes, 720 yards, and four touchdowns.

Big cheers as Teddy and Diggs arrive together. #Vikings pic.twitter.com/KpuH6YsUhi

Arriving to Mankato for his tenth training camp, Vikings running back Adrian Peterson seems to be more concerned with the team this season than with his own, personal goals. The 31-year-old Peterson clearly knows that his window to win a Super Bowl is quickly closing.

Adrian Peterson said he doesn’t care if he gains 2500 or 1500 as long as he’s playing in Houston in SB he’s happy, pic.twitter.com/aundHkbn13

Practice begins for Minnesota tomorrow morning at 10:30am (central time). Check back with Vikings Territory throughout Vikings training camp as we will have complete coverage of the team throughout each and every day!