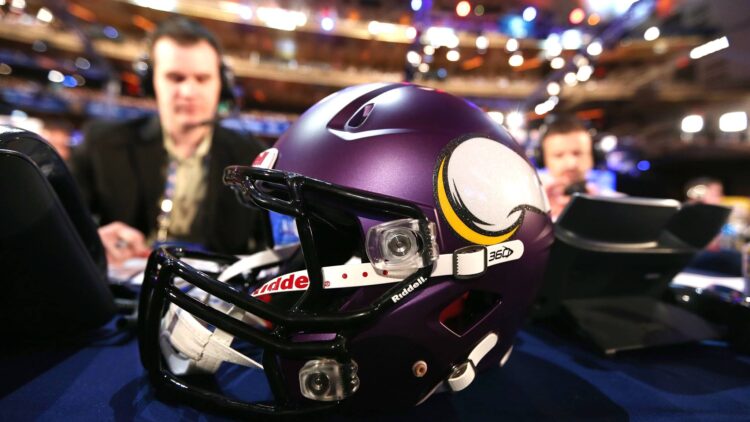 With the Scouting Combine long past and free agency underway, it’s time for Version 2 of our mock draft roundup. Last month, we did a pre-combine breakdown of who the online world expected the Vikings to draft in the first round. Now that (most of) the players have gone under the microscope, lots of opinions have changed, and draft stocks are rising and falling across the board. Also, the rush of early movement in the free agency tampering period has already had an effect on team needs; we’ve already seen the Vikings make a handful of moves, including the release of Mike Wallace. So here’s an updated look at who mock drafts have the Vikes taking at number 23:

Based on the early returns, Adam’s second mock draft is helping diffuse the hostile situation he created when he first mocked TE Hunter Henry to the Vikings. Adam expects Rick Spielman to be productive in free agency, eliminating a few needs and allowing him maximum positional flexibility in the draft. He points out Lee is a top-tier athlete and would make a blazing fast linebacking unit next to Anthony Barr and Eric Kendricks. Read the full explanation here.

This is a sneaky pick I could see Spielman making. Smith is an absolute stud; prototype size and skill for an outside linebacker, he would be a complete nightmare opposite Anthony Barr. The knee injury hurts his stock, but torn ACLs and MCLs aren’t the devastating blows they used to be.  Read the full explanation here.

Draft Season’s Ultimate Mock has the Vikings going O-line, noting they’ve been high on Whitehair and won’t reach for a receiver if the value isn’t there. Read more.

In his pre-combine mock, Brooks had the Vikings taking Whitehair. Now, he’s predicting Whitehair to fall out of the first round completely, and Doctson to be the pick at 23. Brooks points out Doctson could be the red zone threat the team lacks, and he has “speed, quickness and route ability.” Plus, Mike Wallace’s release creates more of an immediate need at receiver, and many are clamoring for a big target. Read more.

Another vote for Doctson, and another analyst switching his pick from offensive line to wide receiver (Prisco projected the Vikings would take Michigan State tackle Jack Conklin in his previous mock). The national media are becoming more convinced the team needs skill position help on offense. Prisco likes what Doctson would offer opposite Stefon Diggs. Read more.

With Kelechi Osemele agreeing to a rich deal with the Raiders, the chance of finding a starting guard in free agency got a lot slimmer. Kadar previously mocked Ohio State wide receiver Michael Thomas to the Vikings, but now believes the “smart” move would be to draft Whitehair and insert him at left guard, noting a solution in free agency would likely be a short-term stopgap measure. Read more.

This, I have to think, would be fairly popular with the Vikings faithful. Cravens could satisfy a combination of need and value at 23, and fix the weak link in the secondary. The Andrew Sendejo signing in no way means they won’t still be looking for an upgrade at strong safety. NFL Draft Geek had Cravens as the pick before the Combine, as well. Read more.

A third vote for Doctson—his strong combine is solidifying him as a late (or possibly mid) first rounder. Read more.

Doctson, Doctson…we’ve got Doctson here! This is becoming a broken record. Doctson ran a 4.5 40-yard dash and had a 41″ vertical leap, and we’re seeing the power of those Combine numbers. Read more.

Lee also had a strong Combine, and Drafttek thinks that will compel the Vikings to take him at 23. They point out that he’s best suited to play weak side linebacker, and that’s where the team ideally sees Eric Kendricks; those two things, on the surface, don’t seem to mesh. But let’s remember Anthony Barr was considered almost purely a 3-4 outside linebacker coming out of college, and that has worked out just fine. Lee is my favorite pick for the Vikings at this point. Read more.

UPI calls Whitehair “this year’s Zach Martin,” and (rightly) thinks the team has a glaring need at guard. This is probably the safest selection they would make. Read more.

11 mock drafts listed, and only 5 different players mentioned. There’s some consensus building about who the Vikings will take at number 23. It’s important to remember Rick Spielman rarely does what you’d expect, so while one of these players could very well be the pick, we could also once again be in for a surprise on draft night.