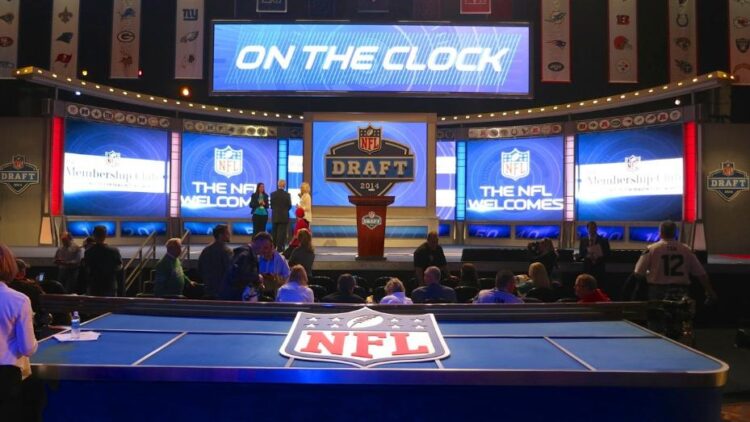 We’re a few months into mock draft season, and the predictions for the Vikings’ selection are all over the board. So, here at VT, we decided to round up some of the more prominent first round mocks from the web, and take a look at who everyone’s picking the purple to pick.

Because the NFL Scouting Combine can cause a player’s stock to rise or fall dramatically, mock drafts are often divided into “Pre-Combine” and “Post-Combine” categories. As this is the opening day of the Combine, you can consider this our “Pre-Combine” mock draft roundup. Each pick listed below will include the site, the selection, the explanation directly from the relevant outlet, and a quick comment from me. We’ll start with our two in-house mocks:

“Forcing a pick to meet an immediate need (Christian Ponder) can have disastrous results. Selecting a player despite what positions the fans think you must target (Anthony Barr) can pay off greatly in the long run. That’s just the mentality I have when putting together my mock drafts and I understand that will not be for everyone.

Henry is a willing and dependable blocker, something the Vikings could certainly benefit from, in both the run and passing game. He would add such a meaningful wrinkle to this offense, one that was too predictable in 2015, while also being another capable safety blanket for Teddy Bridgewater to lean on throughout the season.”

Many people preach “best player available,” and NFL GMs commonly sing it from the rooftops—which, in my opinion, is basically half truth and half public relations spin—but Adam takes it to another level here. I know there would be riots, car fires, and probably the purchase of FireRickSpielman.com if this pick were actually made by the Vikings on April 28. And indeed, this mock selection rendered a majority grade of “F” from the Vikings Territory faithful. But Adam makes a strong argument for the selection of Henry at #23—or, at the very least, the selection of a player that could provide quality depth and production regardless of position. Please read his full explanation of why he mocked Henry to the Vikings to get the whole story.

(FYI, Adam called Trae Waynes to the Vikings in January of 2015.)

“Despite tearing his ACL and MCL in Notre Dame’s most recent bowl game, CBS Sports analyst Dane Brugler believes Smith is still a first round prospect. “Smith will present an interesting value in the first round of the 2016 NFL Draft for a long-term thinking franchise,” he said. And right now, the Vikings are fully focused on their long-term future. That’s why it makes sense for the team to invest in a special player if given the opportunity, no matter the injury history. Wide receivers, running backs, and other offensive players will be available in the later rounds. A player like Smith comes once in a draft.”

Vikings Territory again going outside the box, and this is a sneaky pick I could see Spielman making. Smith is an absolute stud; prototype size and skill for an outside linebacker, he would be a complete nightmare opposite Anthony Barr. The knee injury hurts his stock, but torn ACLs and MCLs aren’t the devastating blows they used to be. If Smith were to fall to the Vikings due to injury, it could prove to be the type of serendipitous happenstance that Teddy Bridgewater’s poor pro day was in 2014.

“The Vikings need to upgrade the protection around Teddy Bridgewater for the young passer to thrive. Whitehair is a rock-solid blocker capable of moving defenders off the ball in the run game while also displaying the footwork and lateral quickness to slow down pass rushers.”

An offensive lineman in the first round certainly isn’t going to sell a lot of tickets, and selecting a guard would have a similar effect to Ambien on the general public. But if they can find a lineman with proper value at #23, the Vikings would be wise to do so. The offensive line was subpar at best in 2015, at could greatly benefit from an infusion of both youth and top-end talent. I don’t know if Whitehair is the guy, but I like the idea.

Interesting note here: Brooks has Cincinnati selecting MIssissippi wide receiver Laquon Treadwell one pick after the Vikings. I know a number of fans who would be…well, slightly disappointed if Treadwell were to fall to #23 and the Vikes pass on him.

“They have line issues in a lot of spots and this kid could step in and play somewhere. He’s been a tackle, but he could easily play guard.”

This is a somewhat popular pick for the Vikings at #23, and it checks all the same boxes as the previous pick, while also having the luxury of being a more first-round-friendly position on the offensive line. There is actually a decent failure rate for first-round tackles, but teams rarely regret the investment when they get a good one.

“The Vikings have a good receiver in Stefon Diggs, but need a big target to complement him. Listed at 6’3 and 209 pounds, Thomas can be that player for Minnesota. Thomas is a physical wideout who knows how to use his size to box out defenders. He can create all over the field and would give Teddy Bridgewater a good No. 1 target.”

Our first receiver. Along with offensive line, this is one of the two most wished-for positions for the team to pick, and it’s not close. Thomas is the big receiver many fans covet, and would provide another weapon in the offense. I don’t love taking receivers high, because I think valuable production can be found later (like, say, the 5th round), but I could understand why they would go this direction.

“A former high-school quarterback, Lee is a terrific athlete and a natural playmaker, racking up 27.5 tackles for loss, 12 sacks, three interceptions, and three forced fumbles over his past two seasons.”

Business Insider does mock drafts? Apparently. The most interesting thing here is their approach: B.I. aggregates a bunch of professional mock drafters, then uses the most commonly selected player for their pick. 3 of the 13 experts they surveyed had the Vikings taking Lee, including ESPN’s Toddy McShay. At a glance, Lee’s credentials—natural athlete who recently switched to linebacker and racked up impressive stats in two seasons—read curiously like Anthony Barr’s coming out of UCLA. I’m not getting my hopes up that high, but adding more teeth to an already formidable defense would be beneficial.

“Popular opinion has the Vikings taking a receiver here, but the more this class sifts itself out it seems the best time to target receivers will be on day two, with Laquon Treadwell being the only sure-fire number one. Josh Doctson could still draw consideration here, but the difference between him and a guy like Will Fuller or Pharoh Cooper in round two isn’t enough to pass on a talent like Su’a Cravens. Not only is Cravens the best player available, but he also fills a need at strong safety next to Harrison Smith. Smith has been incredible at free safety this year, and it’s scary to think what he and the Viking defense could be with an impact in-the-box strong safety like Cravens making plays alongside.”

That safety slot alongside Harrison Smith has been a thorn in the Vikings’ side for years, and the thinking is this pick would solve that problem. I’m not yet sold on Cravens (let’s see how he measures at the Combine), but I can only imagine how the secondary would improve with even a serviceable player at the other safety position.

“Mike Wallace was a predictable bust, and now the word is that he won’t be returning next season. And rightfully so. Stefon Diggs flashed as a rookie, but Minnesota needs to give Teddy Bridgewater another downfield weapon.”

This was actually the one player I said I didn’t want the Vikings to draft. Another small speed player doesn’t do a whole lot for the offense, especially if Mike Wallace is still in tow, and I’m not confident in Baylor skill players transitioning to the NFL. But I’m sure there would be fans happy just to see that “WR” next to the name of a first-round draft pick.

This is of course not an exhaustive list, just a look at some of the more popular mock draft websites. Feel free to weigh in in the comments. We’ll be back with another mock draft roundup after the Combine.