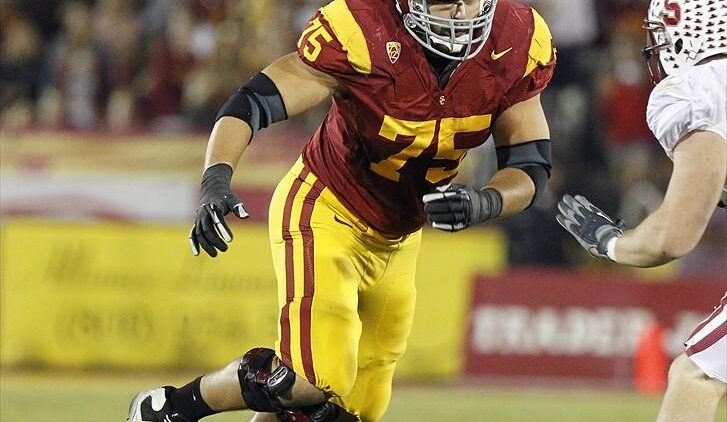 [NOTE FROM ADAM:  This is another installation of my position-by-position breakdown of the Vikings offseason.  You can click the links to view previous installments:  The Passers, The Runners, The Wide Outs, and The Tight Ends.]

Here we finally have an edition of “Offseason Preview” that is almost certain to spark every fans interest.  Sure, the Vikings are likely to pursue upgrades at the receiver position, but the left tackle spot on this Vikings roster is bound to be the topic of conversation between now and April… and probably well into the 2012 season, too.

The Vikings offensive line has been a mess in recent years.  Long gone are the days of Bryant McKinnie, Steve Hutchinson, and Matt Birk dominating opposing D-lines.

Birk has been in Baltimore for a while now.  McKinnie got cut in 2011 after showing up to Mankato looking like the Goodyear Blimp.  And Hutch has had troubles staying healthy, is not the same player he once one, and could also be on his way out.

The Vikings gave up 49 sacks in 2011, a statistic in which only four other teams were worse.  They allowed their quarterbacks to be hit on 76 occasions, which is smack dab in the middle of the NFL rankings.  While some of those hits and sacks can be attributed to the quarterbacks (or tight ends and running backs not picking up their assignments) there is little arguing that left tackle Charlie Johnson was overmatched for much of the 2011 season.  On the other side of the line, right tackle Phil Loadholt continued to struggle greatly with speed rushers and complex blitzes.  In fact, nobody along the offensive line stood out as solid pass blocker, which is something that the Vikings will surely want to fix as they develop the young Christian Ponder.

Despite criticisms regarding this offensive line’s ability to run block, the team averaged 5.2 yards per carry, which was good for second best in the league.  Those numbers are perhaps a little skewed, however, as Christian Ponder and Joe Webb are athletic quarterbacks that each produced solid rushing yards.  It is no coincidence that the Carolina Panthers (Cam Newton) were the only team to have a better average and the Philadelphia Eagles (Mike Vick) were right behind the Vikings.

Phil Loadholt made up for his poor pass blocking by being a road grader in the run game.  Only 13 rushes to the right side went for negative yardage, compared to 22 on the left side and 18 up the middle.

The truth of the matter is that the Vikings offensive line featured pedestrian-at-best performances across the board.  While a healthy center in John Sullivan showed promise throughout his 15 starts, the other seven offensive linemen to suit up in purple during this season all left plenty of doubt in the minds of Vikings fans.

Let’s start with one thing we know for certain, the Vikings have a lot of faith in John Sullivan to continue playing at a high level.  In December, the Vikings agreed to a five year deal with Sullivan worth $25 million, and almost certainly guaranteeing him a starting spot at center.  Sullivan played well after having injuries plague his career early on.  He missed only one game (concussion) and was only flagged for one penalty.

Left guard Steve Hutchinson played 14 games before a concussion ended his season.  He had ups and downs this season, but it seems likely he will have to take a pay cut to stay with Minnesota, as he is due to make $7 million in 2012 and his play has fallen off enough to see the Vikings looking elsewhere.  Hutch has said he will retire after next season, and his family has dug their roots pretty deep in Minnesota, so perhaps a pay cut won’t be totally out of the question.

A 31 year old Anthony Herrera, due to make $2.75 million next year, again struggled to stay healthy and was quite unproductive at right guard.  He missed four games with a knee injury, was flagged for one false start, gave up three sacks, and gave up 23 quarterback pressures.  He is entering the final year of his contract, but the Vikings are likely ready to move on.  Watch for Herrera to be cut, or possibly traded to the Cleveland Browns where Brad Childress will be running the offense.

Phil Loadholt is also entering the final year of his contract.  Here, however, the Vikings will probably feel comfortable giving Loadholt another year to earn a second contract by continuing to improve.  With any luck, a lockout-free offseason will result in a more prepared and more fit Phil Loadholt in 2012.  Loadholt surrendered nine sacks, 42 quarterback pressures, and was flagged 10 times.

Charlie Johnson signed a three year contract with the Vikings after McKinnie was cut loose.  The contract will play him $2.95 million in each of the next two seasons.  He ended the season playing more snaps than any other offensive lineman but gave up eight sacks, 49 pressures, and was flagged five times.  Johnson is thought to have a future as a utility backup along the line, or possibly as a starting left guard, but the front office would surely like to upgrade the left tackle position in a big way this offseason.

The most impressive reserve lineman was Joe Berger who is under contract through 2012 with a salary of only $1 million.  He played in 13 games, including seven starts at three different positions, and was serviceable throughout the season.

Rookie Brandon Fusco has plenty of time remaining on his contract and will make $465,000 next season.  He saw limited action, but seemed to be a player worthy of development.  His mean streak led to an idiotic personal foul, but that fire is something this line might benefit from.  He can play backup to both guard positions and the center position, and he could possibly be in competition for a starting position if he improves in his second year.

Patrick Brown has been terrible in the little time he has been allowed to play.  He is an exclusive rights free agent this offseason, and the Vikings will probably take advantage of that to retain him, but anyone that thinks he is some sort of answer is just kidding themselves.

Chris DeGeare, Butch Lewis, DeMarcus Love, and Jose Valdez are all question marks at this point, but each should be joining the Vikings in Mankato this offseason.  Scott Kooistra had an awful spine injury prior to the season and is unlikely to continue playing football.

Between Steve Hutchinson, Anthony Herrera, Joe Berger, Charlie Johnson, and Brandon Fusco the Vikings do have some in-house options for their interior line.  Assuming John Sullivan is the solidified starter, guard is really the position in question in the middle.

Carl Nicks (age 27) of the Saints and Ben Grubbs (age 28) of the Ravens headline the group of free agents that could possibly hit free agency this year.  The Vikings interest in high profile players like these would depend greatly on their confidence in the guys already on the roster and their ability to supplement during the Draft.  If the Vikings pull the trigger on a guard in free agency, however, I suspect it will be one of these dominant players instead of yet another mid-level utility lineman.  The 26 year old Jeremy Zuttah from Tampa Bay is an interesting prospect, though.

If you can’t tell, I have my doubts that the Vikings will aggressively pursue any guards in free agency.  Take that doubt and multiply it by ten when it comes to signing any high-level offensive tackles.  The need is there, but the talent in this free agency class is not.

Jared Gaither, who has spent time with three teams over the last 12 months, is 26 years old and played very well for the Chargers at the end of 2011.  His inconsistencies and back injuries make him a risky signing, though, and he will likely be looking for big money as the only premier left tackle to possibly hit the open market.  Demetrius Bell from Buffalo is 28, but has similar consistency issues and health issues of his own.  26 year-old Anthony Collins from the Bengals might be worth a phone call or two.

Now this is where things start to get really interesting.  The Vikings will be in prime position to get great value on offensive linemen all Draft long.  With the third overall pick, they could nab one of the premier left tackles such as Matt Kalil (USC) or Riley Reiff (Iowa).  If they trade down then Jonathan Martin (Stanford) and Mike Adams (Ohio State) could be options, too.

With the third pick of the second round, interior could be on the Vikings radar, as there are some very solid talents that may still be available there.  Cordy Glenn (Georgia), Kevin Zeitler (Wisconsin), and Peter Konz (Wisconsin) would all represent solid values in the second round.

My sleeper pick for the Vikings to go for late is LSU guard Will Blackwell.  He versatile, has decent size, and plays a balanced game.

As far as this section goes, let me just say that we should take nothing off the table.  Maybe Hutch will take a pay cut.  Maybe the Vikings go after restricted free agents.  Maybe they try to swing a trade for a player that represents an upgrade.  Maybe a CFL guy is on their radar.  Maybe they try to deal Herrera to Brad Childress is Cleveland.  Maybe, maybe, maybe…

The point is, this offensive line needs help, and it should be of no surprise if Rick Spielman explores every possible avenue in an effort to find that help.

I think the Vikings will have a new left tackle starting in 2012.  I would say Matt Kalil is by far the most likely, but there is a chance they decide to surprise us with a guy like Reiff or trade back and snag Martin or Adams.  I do think that their new left tackle will be a rookie, though.

At guard, I think Hutchinson will be back but Herrera won’t.  I think Joe Berger, Charlie Johnson, and a mid-round rookie end up battling for the remaining starting spot at right guard.

After that, DeMarcus Love and Brandon Fusco will be battling to fill out the rest of the roster.

It gets tricky, predicting how the Vikings will approach their problems along the offensive line, and the first step will be them admitting to themselves that those problems exist.  I am not 100% sure they have admitted that to themselves yet, but I think they will by the time April rolls around.

This line is well overdue for an overhaul.