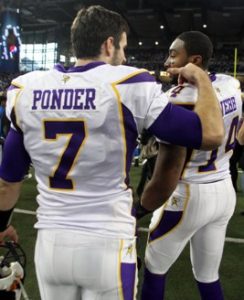 [Note From Adam:  This is the first segment of a position-by-position breakdown of the Vikings roster, how they fared in 2011, and where they might be headed in 2012.  I will include the contract status for key players, possible Draft and free agency targets, and my predictions for how things will play out this offseason.]

Since the Vikings still have an unsettled coaching situation on the defensive side of the football, I thought it best to get started on these segments by first addressing the offense.

For the first time in years, the Vikings lack a will-he-won’t-he situation and have a fairly set depth chart at the quarterback position.  That isn’t to say the position is an area of strength, but we all pretty much know who we will be seeing in 2012.

After the Vikings traded for Donovan McNabb in the 2011 offseason marred by a lengthy lockout, the team and fan base thought they would at least be getting mediocre play from the quarterback position.

McNabb turned out to be an out-of-shape disappointment as he started the season with a 1-5 record and some very low production.  In six games, McNabb completed 60.3% of his passes for 1,026 yard, and only managed to throw four touchdowns.  He never threw for more than 228 yards in a game and his quarterback rating for the season ended up at 82.9.  After six games, five of which were miserable, the McNabb experiment was cut short in Minnesota to make way for first round rookie Christian Ponder.  McNabb was granted his request for a release following week 12.

Christian Ponder, widely viewed as a reach when the Vikings selected him at #12 in the 2011 NFL Draft, took over the offense in a week seven matchup against the reigning Super Bowl Champion Packers and performed admirably in the loss.

Ponder’s rookie season looked like what you would expect from a rookie.  He completed 54.3% of his passes, threw for 13 touchdowns and interceptions alike, lost two fumbles, suffered 30 sacks in 10 starts, and had his toughness questioned down the stretch when he seemed incapable of playing 60 full minutes of football without getting hurt.

It wasn’t all negative with Ponder, however.  He showed very solid poise in third down and redzone situations.  His athleticism showed through as he averaged 7.8 yards on 28 rushing attempts, and also escaped from a collapsing pocket on numerous occasions.

Still, the fact remains that Ponder only had two wins and a rating of 70.1 through 10 starts.  He had a beleaguered offensive line in front of him and a hobbled group of playmakers around him, but Ponder’s first season was undoubtedly one in which he struggled.

After yet another offseason of floating between quarterback and wide receiver, Joe Webb continued to over achieve and give his coaching staff something to think about.  Mostly playing the role of a relief pitcher, Webb stepped into the offense on numerous occasions and was fairly productive.

In 63 total passing attempts he completed 54% of his passes, threw for 376 yards, had three touchdowns, and two interceptions.  His quarterback rating for the year ended up being 74.6.  Webb also continued to show off his superior athletic abilities when rushing 22 times for 154 yards and two touchdowns.  Webb provided a spark to the offense at key times, but he also fumbled away an opportunity to beat Detroit in week 14 and failed to convert a first down, due to a poor read on an option, at the end of their week 16 game against Washington which allowed the Redskins another chance to win the game.

Sage Rosenfels was brought in as a replacement to Donovan McNabb as the team’s veteran backup.  He never threw a single pass for the Vikings, and in fact hasn’t attempted a pass in the NFL since he was a member of the Houston Texans in 2008, according to NFL.com.

Christian Ponder is entering the second year of his four year rookie contact worth $10.15 million, which will keep him employed through the 2014 season.  Joe Webb has two more years remaining on his rookie contract.

Sage Rosenfels is set to become an unrestricted free agent in March.  The Vikings also signed McLeod Bethel-Thompson to a futures contract.

Ponder is certainly in line to be the starter at the beginning of 2012, and Joe Webb has earned the right to focus primarily on his role of reserve quarterback.  Bethel-Thompson is essentially expected to amount to nothing more than a camp arm.

This leaves the Vikings likely coveting a veteran backup to not only mentor the younger quarterbacks on the roster, but to lead the scout team on a weekly basis.

There is zero chance of Drew Brees actually becoming an unrestricted free agent.  Matt Flynn will want to sign with a team willing to give him a legitimate shot at a starting gig.

The Vikings likely want to sign a cheaper veteran able to occupy the #2 or #3 spot on the depth chart, anyways.  That is unlikely to be big name that generates any excitement.

The Vikings, especially newly appointed General Manager Rick Spielman, are fond of Sage Rosenfels and may simply want to re-sign him.  Offensive Coordinator Bill Musgrave has familiarity with veteran quarterback Chris Redman from his days in Atlanta, but the coaching staff will have less ability to influence the roster this offseason.

The Vikings could certainly entertain the idea of other veterans such as Derek Anderson, Shaun Hill, Rex Grossman, or Byron Leftwich.

The talent at the top of this draft class, mainly Andrew Luck and Robert Griffin III, may end up playing a big part in the Vikings draft strategy, but they will not be selecting either of them.

In fact, I don’t expect they will be drafting any quarterbacks in 2012, unless a great value falls to them in a later round.

Maybe some guys like Jordan Jefferson (LSU) or Brandon Weeden (Oklahoma State) would get a chance to be drafted by the Vikings if they slipped into the sixth or seventh round.  Even then, I think the Vikings would be prone to look the other way and select someone at a position of need.

None of the restricted free agent quarterbacks should be viewed as particularly attractive to a team that needs a veteran, not another project, to fill out their depth chart.

Well, if you haven’t guessed it already, my prediction for this position is going to be pretty boring.

I think Christian Ponder will remain the starter, Joe Webb will remain a backup, and that the Vikings will sign a veteran (probably Rosenfels) to serve as the other backup.