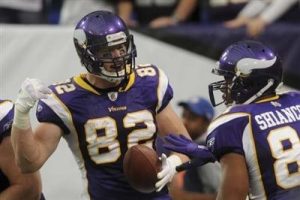 [NOTE FROM ADAM:  This is another installation of my position-by-position breakdown of the Vikings offseason.  You can click there links to view previous installments:  The Passers, The Runners, and The Wide Outs.]

The Vikings knew that the end of the 2011 season would signal a crossroads when it came to the tight end position.  They got a head start on addressing the situation by drafting Kyle Rudolph in the second round of the 2011 Draft, but work still needs doing.

Despite only catching one pass for four yards, Jim Kleinsasser continued to be an incredibly valuable player for the Vikings.  He has made a career of being one of the most consistently dominant blockers in the league.  He has also been versatile enough to be the team’s most effective lead blocking fullback.

When it came to receiving statistics, Visanthe Shiancoe led the tight ends with 36 catches and 409 yards, having scored three times.  For the second season in a row, however, Shiancoe seemed out of sorts with inconsistencies and nagging injury problems.

Rookie Kyle Rudolph was probably the most impressive of the group, playing well as a pass catcher and a blocker, and showed why he was the highest ranked tight end prospect in the 2011 Draft class.  Rudolph ended his rookie campaign with 26 catches, 249 yards, and three touchdowns.

Some in the media and in the stands became frustrated with how sparingly the Vikings seemed to use Rudolph.  He never had more than three catches in a game and never once was able to top 50 yards in a game.

Allen Reisner was the only other Viking tight end to catch a pass this season.

Kyle Rudolph is the only tight end that is a lock to be on this roster in 2011.  He will be entering the second season of his four year rookie contract worth $3.91 million.

Jim Kleinsasser decided to end his career as a life-long Viking.  The team had a miserable season, but one of the few highlights was watching the rare event of a player celebrating a career ending in the same place it began.  Kleinsasser will be missed, and filling his shoes will be a near-impossible task.

Visanthe Shiancoe’s contract will also be expiring, but he is not yet ready to retire, so the Vikings face a choice as to whether or not “Shank” should return.  He’ll be 32 when the season starts, has seen his production decline to seasons in a row, and has not been able to completely shake the injury bug.  The team was thought to have been discussing an extension with Shiancoe in years past, but nothing ever became of it, and it seems like there is a very good chance he is playing elsewhere in 2012.

Allen Reisner and Mickey Shuler are both under contract and should remain on the roster at least until training camp.

If he hits the open market, Packers tight end Jermichael Finley will be one of the hottest names on the free agent market.  While it is fun to dream, the idea of the Vikings spending that type of money on a tight end seems incredibly unlikely at this point.

After Finley, there are a number or second tier options that could help the Vikings out.  Fred Davis (age 26) from Washington is probably the second ranked free agent tight end by most accounts.  Scott Chandler (27), Martellus Bennett (25), and John Carlson (28) could all be intriguing options as the Vikings try to find reliable backups to Rudolph.

The Vikings could once again find themselves in the position to draft the best tight end in the Draft with their second round pick.  This year, that prospect is Dwayne Allen of Clemson who is a really solid blocker in addition to being a dangerous receiving threat.

Orson Charles (Georgia) is very speedy for a tight end while Coby Fleener (Stanford) has a huge frame and solid hands.  Both could be potential picks in the second or third rounds.

Guys like David Paulson out of Oregon and George Bryan from N.C. State, both of whom impressed in the East-West Shrine Game, could be the solid blocking tight end that the Vikings hope to steal in later rounds.

I don’t see the Vikings being aggressive with any restricted free agents.  I also don’t see them seeking out any trades involving the tight end position.

What I do see, however, is that they could be very patient in both the Draft and in free agency hoping to find some great value.  They may even wait to see what players become available later on in free agency, after teams begin to cut players to save on cap space.

I would also like to personally put forth the suggestion that Jeff Dugan should, at an absolute minimum, be invited to training camp in 2012.

I think patience will have to be key here.  The Vikings cannot panic and overpay or reach on a Draft choice to fill their needs at tight end.

I think Rudolph will end up as the starter in 2012.  After that , expect Resiner and Shuler to be competing with some low level free agents and late round draft picks for a roster spot.