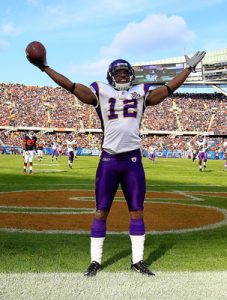 [Note From Adam:  For previous “Offseason Preview” features feel free to click the following:  The Passers and the Runners.]

At the time of this posting, the Vikings are currently at Senior Bowl practices searching through piles of prospects, and there is no doubt that wide receiver will be a high priority as the team enters their second season of the Christian Ponder era.

In 2011, the Vikings had problems at quarterback.  They had problems along the offensive line.  They did, however, also have some problems providing the pass attack with consistent downfield weapons beyond Percy Harvin.

Harvin’s third NFL season was his healthiest and his most productive, despite all of the struggles elsewhere in the offense.  I previously covered his contributions to the run game, but his receiving statistics were quite solid as well.

Harvin ended up posting a career high 87 catches, a career high 967 yards, and his six receiving touchdowns matched his career high.  He was generally sure handed, seemed as quick and elusive as ever, but despite all of the positives he never seemed like a good fit as a number one receiver in Bill Musgrave’s offense.  There is little debate to be had that Harvin is at his best when playing in the slot or out of the backfield.

No other Vikings wide out was able to gain even half the yardage or half the catches that Harvin was able to, but both Michael Jenkins and Devin Aromashodu flashed the ability to have a secondary role in this offense.

Jenkins caught 38 passes for 466 yards before landing on the injured reserve following week 12.  He also grabbed three touchdowns, but this was essentially his least productive season since he was a rookie with the Falcons in 2004.  Jenkins cannot really be considered more than a possession type receiver at this point in his career, but when it comes to depth at the receiver position the Vikings could certainly do worse.

Prior to 2011, Aromashodu had never started more than two games in any season, so it is no surprise that his six starts as a Vikings led to his most productive season six year career.  He played in all 16 games for the Vikings and notched 26 receptions for 468 yards and a touchdown.  Aromashodu has the size and speed to continue to be a quality backup in this league, but he is unlikely to ever be that true number one guy the Vikings need so badly.

Alright, we have established that Percy Harvin, Michael Jenkins, and Devin Aromashadu displayed enough talent to at least keep us interested.  What if I told you, however, the staggering statistic that no other Vikings wide receiver managed to even catch 10 passes.

Greg Camarillo (9 catches, 121 yards), Bernard Berrian (7 catches, 91 yards), Stephen Burton (2 catches, 38 yards), Emmanuel Arceneaux (1 catch, 10 yards), and Joe Webb (1 catch, 9 yards) were all practically invisible when it came to impacting this team as a wide receiver.  Sure, some of these guys had better reasons for the lack of production than others, but the bottom line is that none of them proved to be capable during a season in which “capable” was the only thing the Vikings needed.

Percy Harvin’s rookie contract was for five years, so he still has two seasons remaining.  In 2012, he is set to earn only $915,000, so the Vikings should get at least one more year out of him at a bargain.

Greg Camarillo and Devin Aromashodu are both set to become unrestricted free agents in March.

Kerry Taylor and Kris Adams are both on this team having signed futures contracts.

This is potentially going to be a very deep free agent class at the receiver position.  Vincent Jackson, whom the Vikings attempted to trade for in 2010, is one more year removed from his DUI problems and could potentially headline this free agency class at age 29.  The Vikings are almost certainly going to again express at least some interest in his services.

Jackson isn’t the only possible free agent option the Vikings could pursue to fill their need for a top wide out, however.  Dwayne Bowe (age 27), Marques Colston (age29), Stevie Johnson (age 26), DeSean Jackson (age 25), and Brandon Lloyd (age 31) have all proven to capable, field-stretching receivers that would immediately upgrade the quality of weapons surrounding Christian Ponder.

The free agent class doesn’t end there, though.  Wes Welker (age 31), Mario Manningham (age 26), Reggie Wayne (age 33), Laurent Robinson (age 27), and Robert Meachem (age 27) could each be available, too.  While none should be considered a sure-fire #1 guy, each would certainly represent an upgrade to the Vikings roster.

If the Vikings want to aim for the cheap and youthful approach, hoping to luck into some upside ready to blossom, there are some decent options available.  Pierre Garcon (age 26), Josh Morgan (age 27), Eddie Royal (age 26), and Chaz Schilens (age 26) could all be interesting options.

The Vikings stand to have plenty of options in free agency when it comes to the receiver position.  I’m betting that the question in not “if” they will sign a receiver, but rather which receiver they will choose to target.

Or maybe that last sentence should be plural.

Like the free agency class, the Draft class of 2012 possesses some very solid talents and an incredible amount of depth.

The top dog of this class seems to be Oklahoma State’s Justin Blackmon.  With decent size, great speed, toughness, and an ability to generate big plays out of nowhere, Blackmon stands to be the NFL’s next great rookie receiver.  There are, however, some questions about his maturity and attitude, which will make his interview performances incredibly important leading up to the Draft.  It is fairly likely that Blackmon will be an option the Vikings have to consider with the third pick.

I would consider it a more likely scenario that they spend picks in the neighborhood of the second or third rounds instead.  With the solid depth at receiver in this free agency class, there is a potential for some incredible value in this draft if teams feel like they filled their needs in free agency and receiver prospects start to slide because of it.

Other than Blackmon, I think it is very possible we see one of the other top receiver talents fall to the Vikings when they select in the second round.  Alshon Jeffery (South Carolina, Mohamed Sanu (Rutgers) and Michael Floyd (Notre Dame) each have the size and speed to be the playmaker the Vikings are hoping to land with their second pick.

A little farther down the line prospects such as Dwight Jones (North Carolina), Rueben Randle (LSU), Tommy Streeter (Miami), Stephen Hill (Georgia Tech), and Marvin McNutt (Iowa) are all talents that the Vikes could end up eyeballing in the second or third rounds.

Nick Toon (Wisconsin) doesn’t possess the speed typical of a top tier wide out, while Kendall Wright (Baylor) doesn’t have the size, but both could also end up being solid additions to the Vikings depth chart if the value is there while they are on the clock.

One third day prospect to keep an eye on is Appalachian State receiver Brian Quick.  He is showing off his size, speed, and playmaking ability in front o Vikings coaches at the Senior Bowl, so they may just become impressed enough to nab him in the fourth or fifth round as a project.

I suspect the Vikings will target size as a primary attribute for their next generation of receivers, especially with Percy Harvin locked up for the immediate future, but if speed and return abilities are coveted there could be some steals later on in the Draft, too.  Ryan Broyles our of Oklahoma and Tim Benford of Tennessee Tech could be some options worth taking a flier on.

The truth of the matter is that I have neglected to even mention about 20 guys worthy of being drafted prior to the seventh round.  While it is a good thing that this receiver class appears to be so deep, it makes it an even more daunting task for Rick Spielman and company to sort through all the names and faces to find the true gems of the bunch.

I think I am at least one year premature in mentioning this, and I honestly don’t think it will happen, but I suspect that the media will make a story of it anyways.  “It” refers to the fact that Percy Harvin is vastly underpaid and that he would have all the leverage in the world if he decided to hold out for a new contract this preseason.  He means too much to too many phases of this team and the Vikings would almost certainly have to pay him what he wanted.  Harvin, however, would take a huge hit to his public image if he were pull a stunt like that with two years remaining on his contract.

I don’t expect the Vikings to engage in any trades regarding the receiver position.  They don’t really have anyone worth trading away (and they won’t trade Harvin), and their draft picks are too valuable to the future of this team to simply trade away unless they are offered a smokin’ deal.

Restricted free agent Mike Wallace assuredly be tendered at the highest level if he isn’t resigned by the Steelers for the long term.  Danny Amendola of the Rams is an interesting option to keep an eye on, because the Rams may not tender him at a very high level, and at the age of 26 he could be a decent option to consider.

I think the Vikings will come out of free agency having added a true top tier receiver.  If they don’t, then Justin Blackmon is suddenly going to become a very serious candidate for being drafted third overall.  The investments won’t stop once the Vikings have a number one guy in the fold, however, and they will continue to search for value at the position throughout free agency, throughout the Draft, and all the way until final cuts are made in August.

If you wanted to press me, I would predict that the Vikings 2012 depth chart will consist of Vincent Jackson, Percy Harvin, Michael Jenkins,  another veteran (such as Harry Douglas), and a mid-round rookie or two like Marvin McNutt or Brian Quick.  I also wouldn’t be too surprised if Stephen Burton stays in the mix.

I do not think Camarillo or Aromashodu will be back.  Cutting Burton or Arceneaux would be financially easy, quite frankly.  The Vikings are in a position where they could greatly upgrade the receiver talent on this roster and I think big changes are coming.  With the depth potentially available at the position this offseason, it is too great of an opportunity to upgrade for Spielman to pass up.