The Vikings Biggest Free Agent Decision from a National Lens

The 2023 Minnesota Vikings will have significant changes from the 2022 roster as such is life in the NFL for any team — but may be supersized for the 2022 NFC North winner.

These players are slated to hit free agency in March:

The Vikings Biggest Free Agent Decision from a National Lens

And if the Vikings adhere to normal NFL customs, at least a handful of the players above will receive contract extensions. Inside the Vikings digital community, upstart players like Duke Shelley and Khyiris Tonga seem like no-brainers to extend on cheap deals based on how the men performed in 2022. Both came from the Chicago Bears, were cast off by Bears general manager Ryan Poles, and later thrived with the Vikings.

From a national viewpoint, though, the biggest decision facing Minnesota is the free agency of Patrick Peterson, according to The 33rd Team, a football thinktank website.

Peterson, 32, played tremendously in 2022, ranking as the league’s 13th-best cornerback according to Pro Football Focus with a 77.8 grade. For that reason, in an article about one big decision facing each NFL team, The 33rd Team’s Ari Meirov pegged Peterson as Minnesota’s largest question mark.

Meirov said about the Vikings situation involving Peterson’s free agency, “Peterson, who will turn 33 this offseason, is the oldest starting cornerback in the NFL. None of that mattered as he started all 17 games this past season and had five interceptions (tied for fifth in the NFL) and 15 passes defended (tied for sixth).”

“He held QBs to a sub-70.0 passer rating on targets in his coverage. Peterson is also an admired leader in the locker room and recently said on his podcast that he would love to be back in Minnesota for a third year,” Meirov added.

The process should be unimpeded if the Vikings front office and coaching staff want Peterson back.

Peterson discussed his future last week on the podcast All Things Covered, a show he hosts with his cousin Bryant McFadden, a former NFL cornerback, “I would love to be there in that purple and gold again and give it a run again just because I love the community there. I love the organization. I love the new regime that [was] brought into that building, the trainers, the strength and conditioning staff. It’s just amazing. I truly believe it felt like home for me. I felt like it was a place that I belonged. But we all know it’s a business.”

“It was very disappointing to end the season in the Bank the way we did, to have so much high hopes and aspirations for the team, but the good part about all of it is that I had an opportunity to continue to grow some great relationships that got better from the year previously,” Peterson concluded.

Then, the day after the Vikings fired defensive coordinator Ed Donatell, Peterson again affirmed his plans to stay with the Vikings, telling CBS Sports, “I love it there,” in reference to Minneapolis and the Vikings organization.

The future Hall of Famer stated last year that he planned to play three more seasons in the NFL, which means two should be left on the menu if his original plan is intact. Peterson also mentioned to CBS Sports that he had a “great exit meeting” with Vikings bossman Kwesi Adofo-Mensah and head coach Kevin O’Connell.

Minnesota has a few cornerbacks in the mix for its 2023 defense — Cameron Dantzler, Andrew Booth, Akayleb Evans, plus free agents Peterson and Shelley. Peterson could be welcomed back as a steadying force while Booth and Evans continue to develop.

Additionally, the Vikings have the 23rd overall pick in April’s draft and could reasonably select a corner at that spot.

Peterson logged five interceptions in 2022, his most in a single season since 2012. 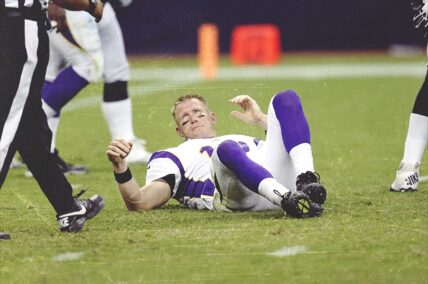