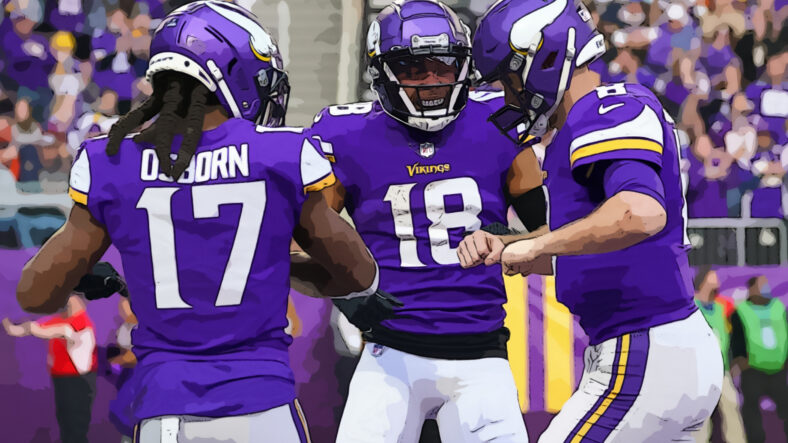 This week, Pro Football Focus published new team wide receiver rankings for the first time since Week 3. With the arrival of Kevin O’Connell as head coach, the Vikings were supposed to become more dynamic with a greater emphasis on the passing game.

The Vikings are passing the ball more in 2022 — 63.76% of plays this season, compared to 58.54% in 2021. Justin Jefferson has put up the big numbers you would expect. His 654 yards is the third most in the league, and he already has the bye week behind him. He will challenge to be the receiving yards leader this season. Behind Jefferson, it’s been statistically disappointing.

Adam Thielen has 284 yards and two touchdowns, which isn’t terrible for a WR2 but doesn’t meet the high standards set by Thielen. At 32, his best years may be behind him. However, he still has a lot to offer and plays a significant role in this Vikings offense.

Meanwhile, KJ Osborn has just 177 yards and one touchdown; the touchdown and 73 of those yards came in one game against the Lions. Most of which came in the game’s final two plays for the Vikings, ultimately clinching the victory. Outside of that, Osborn has only shown up sporadically in the offense.

Earlier in the season, the Vikings ranked 7th in PFF’s wide receiver rankings. In the new Week 8 rankings, the Vikings receivers have dropped two places to 9th — still high in the rankings but shows a dwindling belief in the overall perception of the group as one of the league’s very best. PFF offers the overall grades for the Vikings top three receivers and has the following to say about the unit;

Justin Jefferson is averaging 2.74 yards per route run, third-best in the NFL.

Jefferson has 293 yards after the catch, second-most in the NFL

The quality of the Vikings depth is vastly undersold here. Jefferson is the clear WR1, meaning he gets most of the looks in the passing game. However, Thielen and Osborn have produced big plays in crucial moments. Thielen has a significant role in helping Jefferson succeed on the other side. If you watch Thielen during the games, you will notice that he’s drawing a lot of contact from opposing corners. That’s because, contrary to some suggestions, Thielen still has the speed and route-running ability to beat most corners in the league.

Teams are employing that tactic to try and stop Thielen and put extra resources on Jefferson. No matter how good a corner is, you don’t want to leave them one-on-one with the Vikings No. 18. This is why you see so many flags against defenders for fouls on Thielen; if you added all the penalty yards onto his tally, it would look much healthier.

Do Vikings Need Another Playmaker?

There is also no mention of Jalen Reagor, who the Vikings traded for at the end of August, just before the season started. His primary role thus far has been punt returner, but he has carved out a small role on the offense in the opening six games, including a rushing touchdown in Week 5 against Chicago. Will Reagor’s role expand after spending more time with the team and learning the scheme? There is thought that he could be saved for gadget plays. Either way, getting more out of Reagor would help the Vikings offense.

With the trade deadline fast approaching, rumors about possible targets for the Vikings are abundant. Cornerback and defensive line might be the most apparent areas to strengthen. However, several folks have suggested that the Vikings need another playmaker.

Wide receivers like Odell Beckham Jr., Jerry Jeudy, and Denzel Mims have been mentioned, as well as running back Kareem Hunt and tight end Mike Gesicki. The Vikings have the smallest amount of cap space amongst all 32 teams in the NFL, but there are always ways to make deals work if the Vikings feel that a 5-1 start to the season is an opportunity to get aggressive.

It is unlikely the Vikings will pull the trigger on an offensive playmaker. The defense should be the priority if they want to strengthen the team.

Getting More out of Current Roster

There are plenty of playmakers already on the Vikings roster. With a new head coach and offensive scheme, it often takes time for an offense to jell. Dalvin Cook had a solid start to the season but was coming under fire for lack of explosive runs. Then came a 53-yard touchdown run in Miami, a timely reminder of what No. 4 is capable of.

The Irv Smith breakout season has yet to materialize. The tight end had a couple of untimely drops early in the season but recovered and is doing a solid job as TE1. He has 140 reception yards and two touchdowns from the first six games. In the last year of his rookie contract, he needs to make a significant step forward over the remaining games.

If the Vikings can get more out of Cook, Smith, and Reagor, it will help the offense. Any thought of finding another wide receiver is probably best left until next year when the draft would be an ideal place to find a long-term partner for Jefferson.