Kirk Cousins to 49ers Gossip Is Back 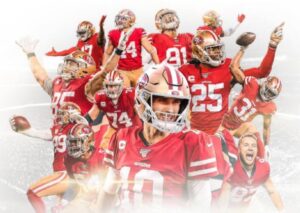 Annually, around the start of the offseason, some Minnesota Vikings-themed voices spitball a trade of Kirk Cousins to the San Francisco 49ers.

That gossip began early this year, even as the Vikings sit atop the NFC North with a 5-1 record.

Such is life with Cousins at quarterback, as the 34-year-old passer is a divisive creature. Before 2022, Cousins’ personal “win-loss” record, as if he was a tennis player but for a 53-man team sport, was 59-59-2 (.500). And that QB wins stat was a lightning rod for criticism, leading some to suggest the Vikings would be better off with a different quarterback.

But why the 49ers? Simple — Cousins and San Francisco skipper Kyle Shanahan have ties back to the Washington Commanders days, and the head coach has never been shy about his ardor for the Vikings signal-caller. Therefore, when it’s time for folks to arbitrarily decide “where Cousins can be traded,” although it never materializes, San Francisco’s name oozes into the dialogue.

The Cousins-to-49ers hubbub this time appears to have originated from Zone Coverage in an article titled Does the McCaffrey Trade Open the Door For Cousins-To-San Francisco In 2023? Of course, Vikings enthusiasts seized on the idea, following the yearly discord on the topic, with entrenchment in camps of pro-trade and anti-trade.

Zone Coverage’s Chris Schad wrote about the possibility of Cousins in red and gold, “After presumably souring on Lance, Shanahan could convince Lynch to make one more push for Cousins, giving the Vikings a godfather deal for his archetypal quarterback. Such a deal wouldn’t be cheap, but perhaps the 49ers wouldn’t care.”

It is unclear why or how the Vikings coaching staff and front office would immediately lose faith in Cousins after the 2022 season, but Zone Coverage surmises an early-round playoff exit would do the trick.

Schad continued, “With plenty of leverage, the Vikings could demand the best offer for Cousins. This would also give Kwesi Adofo-Mensah ammunition to get his own quarterback in the draft.”

Then, armed with draft capital and Cousins gone from everyone’s lives, Adofo-Mensah could draft one of the monsters-of-rock quarterback talents from the 2023 draft pool, as the group is said to be marvelous.

With the theory, it is also undetermined where incumbent injured starter Trey Lance lands. There is no mention of the Vikings acquiring Lance, who the 49ers plucked via kings-ransom trade with the Miami Dolphins in 2021.

On Thursday night, San Francisco netted running back Christian McCaffrey from the fire-selling Carolina Panthers for — you guessed it — another king’s ransom, suggesting the 49ers are in it to win in 2022 and beyond. Evidently, Cousins at the helm in 2023 is a wiser solution than Lance — if Big Kirko to San Francisco hypotheses are the real deal.

Overall, Cousins waltzing to the 49ers is unlikely for several reasons:

Cousins and the Vikings hope to build on the 5-1 start after the Week 7 bye, hosting the underperforming Arizona Cardinals in Week 8.