Vikings Head Coach and GM Will Have a Leash 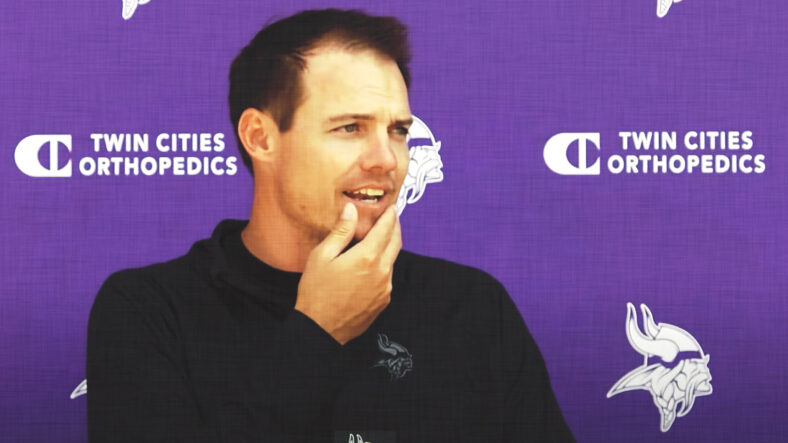 It’s been Hakuna Matata for the Minnesota Vikings these last few months. With the new Vikings head coach and GM come hope and hype.

Kwesi Adofo-Mensah brings an analytical, collaborative, human-first approach that has paired nicely with Kevin O’Connell’s upbeat and innovative leadership style. Training camp is just underway, and everyone is smelling the flowers. But if this youth movement goes horribly wrong, how long of a leash will the new coach and GM get?

Not Bad — Could Be Better

O’Connell and Adofo-Mensah are entering a less-than-perfect scenario in Minnesota. Kirk Cousins is very good, but not great. Defensive stalwarts like Patrick Peterson, Eric Kendricks, Danielle Hunter, Harrison Smith, and newcomer Za’Darius Smith are either getting old or often injured. The rest of the defense is largely young and unproven. The offensive line has been a mess for years. Justin Jefferson is the only sure thing on this team, and even he is only entering his 3rd year in the league.

Pair that with KOC and Kwesi’s inexperience, and success this season is far from a sure thing.

Minnesota is clearly in win-now mode, as exhibited by the re-signing of Kirk Cousins and the acquisition of Za’Darius. There are benefits in walking into a situation where winning now is possible, but there’s extra pressure to actually go out there and do so.

Unfortunately, many scenarios could happen independently or simultaneously that could sink the 2022 Viking longship. Ed Donatell’s 3-4 scheme may not actually fix the defense. “Bulked-up” Bradbury and the boys may not be able to withstand middle pressure any better than last year. Za’Darius and Danielle may spend more time in the medical tent than on the field. Patrick Peterson may lose a step, putting too much pressure on unproven Cam Dantzler and Andrew Booth Jr. to pick up the slack.

What if enough of these scenarios come to fruition, and we all realize that *gasp* it wasn’t all Zimmer’s fault?

Time to Go for It

The Vikings decided to go for it now because they believe they have a roster that can compete for a championship, and the NFC looks wide open for the next four to five years. Besides Brady and Rodgers, who are nearing retirement (we think), there aren’t many QBs in the conference that scare me any given Sunday outside of Kyler Murray and Matthew Stafford, who both have considerable flaws. If there is a time to push the chips in, now is that time. If the new duo can’t get it done, the Wilfs may look for a pair who can.

Even if things don’t go as planned this year, and the Vikings finish with 8 or 9 wins, you’d have to believe that Kwesi and KOC won’t be out of work in February. Initiating a new culture, system, and roster makeup take time, and there should be a grace period for those things to all mesh. Even if the Wilfs are impatient to win now in the open NFC, Kwesi deserves time to get his fingerprints on the roster, from free-agent acquisitions to draft picks; and O’Connell and his staff will need the time of day to develop that talent. If those “bets” don’t pay off in time, one can assume the leash will get a little shorter.

May Take Some Time

Regardless of the success of the next couple of seasons, Minnesota should be in a position to stay competitive and avoid a full-scale rebuild. Adofo-Mensah’s “competitive rebuild” approach is designed to keep the contending window open longer, even as the talented veterans move onto the back nine of their careers or go elsewhere. This approach won’t work, however, if the players that are being drafted and developed don’t pan out.

As a surprise to some, Rick Spielman lost his job last winter as the Vikings’ brass looked to build a new culture in Minnesota. Slick Rick clearly brought in some high-level talent in his time: Adrian Peterson, Percy Harvin, Kendricks, Barr, Harrison Smith, Kyle Rudolph, Thielen, Jefferson, Cook, and Cousins, to name a few. For Adofo-Mensah, he will need to not only evaluate and bring in talent but also build a collaborative environment. So far, we’ve seen that to be the case. Time and adversity will tell how long it lasts.

I would expect a relatively loose leash for the new architects of the Minnesota Vikings to have the autonomy to bring their style and energy to an organization hungry for sustained success. However, for a team looking to win now in an open conference, if Kevin and Kwesi can’t muster higher levels of success than the previous regime, that leash will be tightened to a choke sooner than many may think.