The Vikings Most Important Offseason Addition 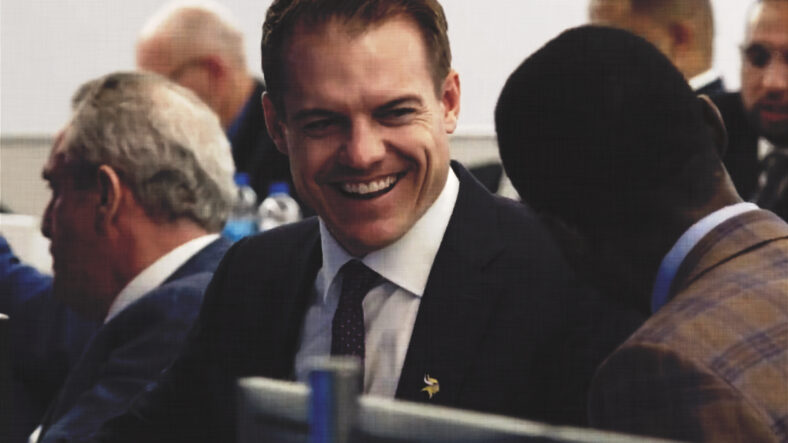 The offseason is the time to be excited about your favorite team, the Minnesota Vikings. There are a few reasons why.

Talented additions to the roster like Za’darius Smith and Lewis Cine are one reason. Another reason is that the organization tries to bring the best possible team on the field. Most prominently shown by the extension of Kirk Cousins’ contract and the fact that they kept all of the top players. But the most important moves aren’t players on the roster. It’s their bosses.

The 10th Head Coach of the Vikings

At times, Zimmer came across as a stubborn and tough coach. Even though, occasionally, he showed a different side. He cared about his players. However, it felt like he was a coach with similarities to coaches in the 1960s, a drill sergeant. There is nothing wrong with that. Different coaches have different coaching and leadership styles, but after a few years, players want a different style.

Kevin O’Connell appears to be the complete opposite. He’s a young, dynamic, and charismatic person. The league is strongly going in that direction. Offensive minds in their 30s are the new profile organizations want for their new head coaches. But not only the personality and age are different, but also the background. Zimmer is a defensive coach. Some say he’s a defensive genius, an elite defensive mind. O’Connell, meanwhile, is a coach with an offensive background. As a disciple of Sean McVay, O’Connell is exactly what organizations want as their head coach nowadays.

Not only the head coach is different, but also the general manager. Kwesi Adofo-Mensah was hired to replace Rick Spielman. The personell moves of Adofo-Mensah and Spielman look the same. Trading back to have more shots at drafting good players while trying to keep the team’s core together. The differences, again, are in the communication. Spielman talked like a politician. When listening to him, it sounded like he never wanted to give anything away, and the answers were about the same year after year.

Adofo-Mensah, meanwhile, sounds, just like Kevin O’Connell, like someone excited about his job. Again, there’s nothing wrong with Spielman’s style, but the communication differences are refreshing.

Another big part is the relationship between the people in charge. If the reports are accurate, Spielman and Zimmer had a feud. The two couldn’t stand each other, at the very least in their final year. The new guys in town, Adofo-Mensah and O’Connell, appear to be partners, just like Adofo-Mensah said in his opening presser.

After the draft, the Vikings released a 20-minute video about their draft. It shows how the new duo worked together, and they even joked with each other. They appear to be friends.

Adofo-Mensah preached one word all offseason: collaboration. Since his first press conference, this is the word he has always used to describe the culture he wants to bring to the franchise.

The players feel the energy in the building change.

“…And being around KO [Kevin O’Connell] our whole staff it’s just fun being around this group and just going through the process with the guys we’ve got here.”

In addition to the new energy Cook is sensing, the star running back is expected to play a bigger role in the passing game in coach O’Connell’s offense. Something he is capable of, but it hasn’t been fully utilized in recent years. Adam Thielen likes the changes as well.

“The culture that’s been created here is just a breath of fresh air...Really, when you get on the field and you start running through stuff, you’re like ‘man, this is fun. This is exciting.’ When I talk about a breath of fresh air and kind of rejuvenation, it’s because when you get out here, it’s like stuff makes sense and it’s exciting. We have a great team, we have a great locker room, we have great coaches, we have great leadership.“

Thielen is excited about his new regime

Thielen experienced multiple head coaches in his time as a fan of the team. As a player, he joined the Vikings in Leslie Frazier’s last season as the head coach when he was part of the practice squad. On the active roster, Mike Zimmer was his only coach until O’Connell became the Vikings’ leader. Eric Kendricks had the following to say:

“I’m real excited about the staff. Everybody’s been on board, everybody’s been communicating very well. … We have this amazing opportunity ahead of us again.”

Eric Kendricks about the new energy

There is a different vibe in the TCO Performance Center in Eagan, Minnesota. Now it’s time to get the X’s and O’s right. Learning the new system is much easier in an environment the players are comfortable.

The upcoming season can be a big one for the franchise, as a good vibe can become a momentum that leads to success. Energy is an underrated part of the camaraderie indispensable in a team sport. That’s how overachieving teams work, and for those teams, the sky is the limit.