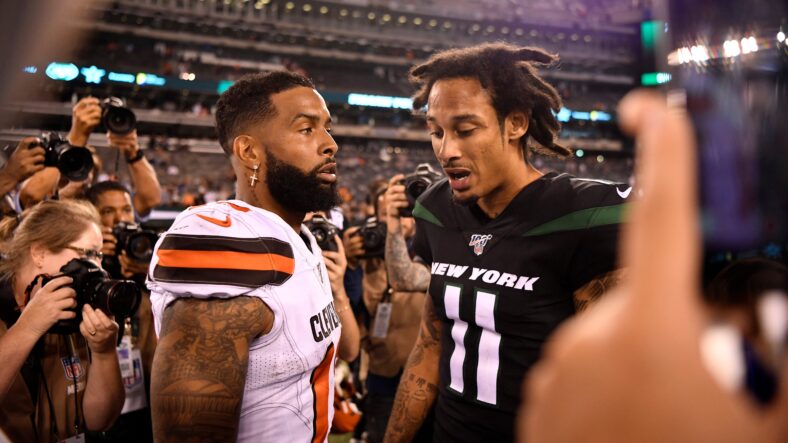 The Minnesota Vikings don’t have much money to sign free agents as of mid-to-late October, but the team’s front office has reportedly talked about one big name.

He’s Odell Beckham, a Super Bowl-winning wideout whose free agency is intriguing various teams leaguewide. Beckham is expected to sign with a team any day or week and perhaps hit a regular season field by Thanksgiving.

Writing about teams that have chatted about adding Beckham for a playoff push, Armando Salguero from Outkick noted, “The Buffalo Bills have had internal discussions about Beckham Jr. The Kansas City Chiefs have. The Minnesota Vikings have.”

And up until Salguero’s article, published on Sunday, the idea of Beckham becoming a Viking was totally fan-driven. The Vikings are unexpectedly 5-1 through seven weeks, so for the first time since 2019, Minnesota is in a position to bolster roster personnel for a playoff push — and maybe even a Super Bowl if the franchise improves in the coming weeks and months.

Salguero also mentioned that the Packers and Aaron Rodgers would welcome Beckham with open arms.

Beckham has played in the NFL for eight seasons, spending time with the New York Giants, Cleveland Browns, and Los Angeles Rams. He’s tabulated 7,367 receiving yards on 531 receptions for 56 touchdowns. Minnesota’s head coach Kevin O’Connell was Beckham’s offensive coordinator with the Rams during the team’s Super Bowl triumph in 2021.

Minnesota ranks last in the NFL per available cap space. Plus, if the Vikings plan to sign any free agents or pull off any trades before the November 1st deadline, others positions need more attention — not WR. Minnesota could improve at defensive tackle, cornerback, and perhaps linebacker.

But Salguero’s mention of the Vikings in the Odell Sweepstakes is the first real link to Beckham possibly joining the club. We shall see. Vikings general manager Kwesi Adofo-Mensah would have to get creative in finagling cap space to make the maneuver feasible.

The Rams and Bills are the Vegas favorites to eventually sign Beckham. If Beckham joined the Vikings, he’d be the fifth LSU alumn on the active roster — Danielle Hunter (EDGE), Ed Ingram (RG), Justin Jefferson (WR), and Patrick Peterson (CB).

Beckham turns 30 in about two weeks.